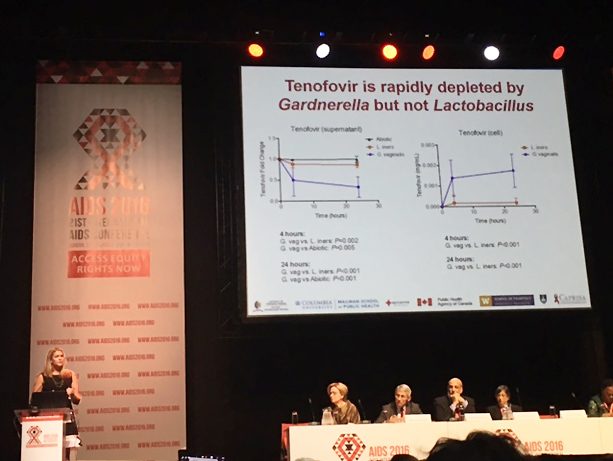 Increasingly, people at risk for HIV infection are turning to preventive drug measures to help stave off the virus. Researchers from the University of Washington School of Pharmacy found that one such drug, Tenofovir, in the form of a topical vaginal gel, is metabolized, or broken down, by the common bacterium Gardnerella vaginalis.

This negative effect counteracts the gel’s intended protection. Women who apply the drug but who have that bacterium are more vulnerable to HIV infection.

New data analyses finds that a monthly vaginal ring containing an antiretroviral drug called dapivirine can cut women’s HIV risk by more than half and, in some, by 75 percent or more.

The good news, however, is that Gardnerella, commonly associated with bacterial vaginosis, is relatively easy to detect and treat.

The finding emerged in the lab of Nichole Klatt, UW assistant professor of pharmaceutics and pathobiology. Grad student Ryan Cheu and postdoctoral fellow Alex Zevin uncovered the mechanism. “These findings open up a whole new field of research in drug efficacy,” Klatt said.

Their analysis looked at 3,334 genital bacterial proteins from 688 women in the Centre for the AIDS Programme of Research in South Africa trial. The trial, a collaboration of the UW team and lead investigator Dr. Adam Burgener of the University of Manitoba and Public Health Agency of Canada, assessed the ability of Tenofovir gel to block new HIV infection.

Analysis showed the drug was less effective for a relatively large population of women, and Burgener and Klatt wanted to understand why. In most of the women, lactobacillus was the dominant vaginal bacterium. Burgener discovered that women who have a predominance of “good” lactobacillus in their reproductive tract were better protected by the Tenofovir gel but hadn’t figured out why until Klatt’s team identified Gardnerella’s role.

Clinics can screen women with a readily available, simple and cheap pH test to quickly discern the greater presence of lactobacillus or Gardnerella, and resolve any imbalance with antibiotic treatment before Tenofovir gel use begins.

In most of southern and eastern Africa, about 380,000 new HIV infections occur each year in females 16-24 years old. These young women experience HIV rates several-fold higher than their male peers, making the reduction of infection among young women one of the most crucial challenges in HIV prevention in Africa.

Klatt said the team is following up with studies of other prophylactic drugs administered orally and rectally to learn whether they have the same vulnerability.

“It is incredibly exciting to have this breakthrough, knowing that it will make a difference in the lives of hundreds of thousands of women at risk for HIV,” she said.

The research was presented July 19 as part of the AIDS 2016 Conference in Durban, South Africa.