Washington and medical-education partners are well-positioned for U.S. grants, he says
Kim Blakeley
06/03/2014 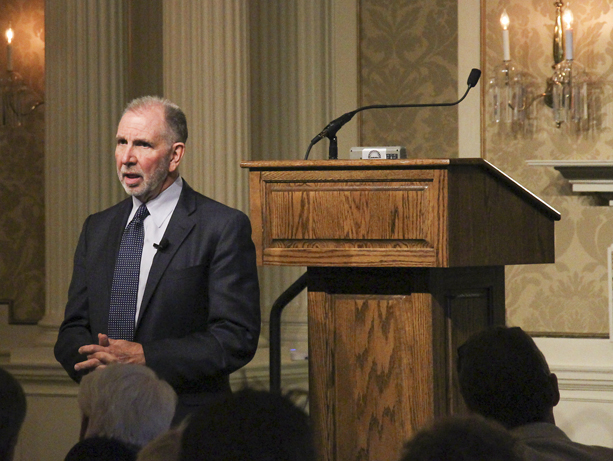 Very few areas in the United States are as well positioned as Washington state to become national research centers. That was the message of University of Washington President Michael K. Young in an address this week to school alumni in Spokane.

In discussing the future of medical education in Spokane, Young noted that National Institutes of Health “mega grants” of $50 million to $100 million are going to cities and regions where multi-institution, collaborative research is occurring, and that the UW and the Northwest’s WWAMI network of partners are perfectly positioned to compete for these grants.

“We have been training doctors in the Spokane community for more than four decades,” he said. “We can do things in Spokane that we can’t accomplish anywhere else. The UW is committed to being a strong partner, a catalyst for Spokane’s vision to be a national model for healthcare education and research innovation.”

Young was joined at the May 29 event by Dr. Charles Murry, a cardiovascular pathologist and director of the Center for Cardiovascular Biology at the UW School of Medicine. Murry presented his lab’s groundbreaking finding, announced in April, in which heart cells created from human embryonic stem cells were successful in repairing damaged heart muscle in monkeys. The study was published in the journal Nature.

The finding suggests that the approach should be feasible in treating heart attacks in humans, and he expects clinical trials to begin in four to five years.