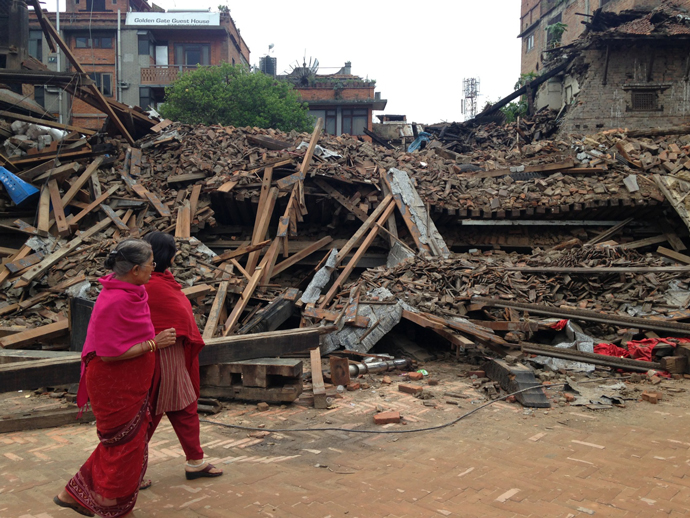 Relief activities in Nepal after the magnitude 7.8 Himalayan earthquake April 25 will last indefinitely. The real effects of the devastating earthquake will emerge and continue for years, said Biraj Karmacharya, a UW School of Public Health graduate student and native of Nepal.

“I think this is going to fundamentally change our careers in many different ways because the priorities have changed,” said Karmacharya, a candidate for a Ph.D. degree  in epidemiology and an MPH in global health. “I think it’s a time to redefine our roles and it’s a time to re-identify ourselves.”

Like other Nepalese students at the UW, Karmacharya has been working furiously to raise funds for relief efforts to help survivors.

“It’ll take a few more days, if not a few more weeks, for us to understand our roles and how we’ll be able to contribute,” said Karmacharya, co-director of the new Nepal Studies Initiative at the Jackson School. “The responsibility of the country now falls to our generation.”

He predicted widespread trauma-related issues. “There are huge construction issues, and issues about communication, health, economics,” he said.” There is no discipline that is not touched.”

Karmacharya is also a medical doctor at a hospital near Kathmandu where he oversees a rural health program. He learned that half a dozen or so of the hospital’s clinics were badly damaged. “It’s still difficult to comprehend,” he said.

He and other UW students were either in bed or about to fall asleep Friday night when they learned of the 7.8-magnitude quake. Several Nepalese students said their immediate family members survived, but some friends and relatives are missing and others confirmed dead.

“It’s difficult,” said Aradhana Thapana, an MPH student in global health, before pausing. “That’s the only word I can use right now.” Thapana returned a month ago from Nepal, where she was doing public health research. “Imaging going back and not seeing all those places I had been,” she said. Many centuries-old Hindu temples were destroyed amid the widespread devastation. “It’s not going to be the same again.”

Thapana said she had been “hiding” in her room for several days, but felt it was time to connect with other people to see how she could help.

A previously scheduled celebration last Saturday by the UW Nepalese Student Association to mark the Nepali New Year was instead turned into a discussion on how to help in the wake of the disaster. The students set up the Nepal Earthquake Relief Fund, which as of midday Thursday had raised more than $11,000. Relief efforts are focused on the rural Gorkha District, which was the epicenter of the quake.

“We hear stories of people starving in the hills,” said Archana Shrestha, a Ph.D. student in epidemiology.

Food and medicine area also desperately needed, as is shelter. “Forget tents,” a friend told Shrestha. “We are looking for plastic sheets.”

Shrestha said even a small financial donation could make a difference. “One meal costs about 20 cents,” she said. “Even one penny is worth it.”

The student group is working with the Seattle Nepal Society to raise funds. They’ve set up a stall in the UW’s Red Square and will keep it up through next week to collect donations. Other events are planned, including a downtown walk on Sunday. Some Seattle restaurants have offered to hold fundraisers.

Several faculty members from the School of Public Health are doing or have done research in Nepal. David Citrin, an affiliate instructor of global health, has lived and worked in remote western Nepal since 2001. He posted this story in the Humanosphere blog to offer advice on how to make the recovery more lasting and effective.