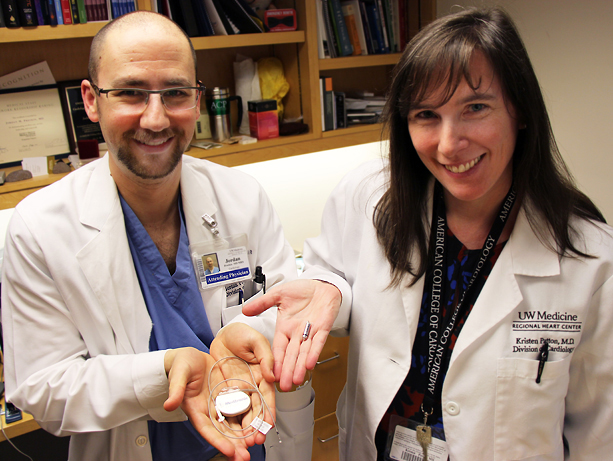 The world’s smallest pacemaker will debut soon at UW Medical Center – one of two Washington state hospitals that will offer the device for the next several months.

About as tall and wide as a AAA battery, the device is threaded up through the femoral vein to the heart, where it is attached to the right ventricle to deliver impuses when a patient’s heartbeat is too slow. The unit’s direct placement takes advantage of another advance: Its battery is inside, so there are no wires connected to a separate power source.

The device's size and its wire-free deployment are considered advantages in terms of pacemakers.
picture of the Medtronics Micra pacemaker beside a nickel

For decades, pacemakers have comprised a generator, usually implanted under the skin in the patient’s left chest, and leads, which carry impulses from the generator into the heart. The wires are these devices’ main vulnerability, wearing out over time and heightening risk of infections. Removing broken leads years after implant can be problematic because they often have become enmeshed within the tissue of blood vessels.

“That’s why this miniature technology is so important and transformative – because it really does reduce risks associated with these devices,” Patton said.

On April 6, the U.S. Food and Drug Administration approved the Micra for patients with slow or irregular heart rhythms. The FDA based its decision on a clinical trial of 719 patients implanted with the device. In the study, 98 percent of patients experienced adequate heart pacing and fewer than 7 percent had complications such as blood clots, heart injury and device dislocation.

The risk of dislodgement is low, Patton said. “Its tiny hooks deploy straight into the muscle and grab and it is very hard to detach.”

The Micra will have limited applicability, at least initially, because it paces only one chamber. About 75 percent of conventional pacemakers pace at least two of the heart’s chambers.

Similar to other single-chamber devices on the market, the Micra’s battery is projected to last 10 to 14 years, depending on how much pacing a patient requires.

At the Micra training, Patton said, she heard something that she hadn’t expected.

“The two physicians leading the session have a lot of experience with this device, and they said it makes a difference psychologically to patients; it removes the visible bump under the skin of the generator and that persistent reminder that ‘something is wrong with my heart.’

“We hear from patients all the time, wondering whether they should move less to protect against lead fracture. Patients ask, ‘What if I wear a backpack? Can I still do pushups or play golf?’ This device seems to be a positive step in that way,” Patton said.

Prutkin sees this device as the beginning of the next generation of pacemakers.

“Right now this can only go in the ventricle, but in time this will be available for both the atria and ventricles, and multiple devices in one person will be able to talk to one another to regulate a heartbeat. That’s down the road, but that’s where this technology is heading.”

The device also will be available at Sacred Heart Medical Center in Spokane.