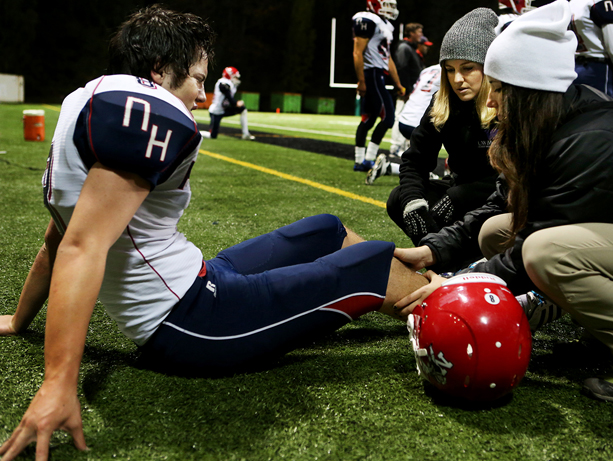 It’s late in the season and late in the game – a time when every yard gained takes on more meaning as players extend beyond their physical limits.

Injuries are the last thing the high school football players want to think about, which is why Katie Ball, a UW family medicine resident, finds herself standing on the sideline with about 30 Nathan Hale Raiders.

They're playing in Memorial Stadium at Seattle Center.  “It’s the real 'Friday Night Lights,' ” she says, alluding to the TV series.

She leans forward and puts her hands on her knees, studying the players. The ball is snapped. Senior receiver Webb Hopkins runs a quick slant to pick up a first down but is tackled hard. One of the team's stars, Hopkins has taken a beating tonight.

Ball watches, waiting. “There is that moment when they are just lying there before they get up,” she says.  “I hate when they just lie there.”

Another second passes and then Hopkins springs up and jogs off the field.

Her eyes follow him as he joins his teammates.

At Nathan Hale, a public school, Ball was one of two team physicians who worked this season alongside Erin Yingling, the school’s athletic trainer, tending to injured players.

As the season has progressed, injuries accumulated and players wore down as games took on more importance. This was especially true for the Raiders, a team whose scrappiness and work ethic made up for its small size, one of the things Ball loved about the team.

In addition to learning more about sports medicine, Ball saw her position as an opportunity to interact with healthy teenagers, a patient population she doesn’t regularly see in her family medicine practice.

“Adolescents are a really interesting and fun patient population,” she said. “It is such an important time in their lives. They are starting to make decisions for themselves and come into their own.”

Some of the decisions involve health and lifestyle choices. Ball recalled a discussion she had with a player whose legs were consistently cramping. She asked about his diet.

“He said he had eaten eight Pop-Tarts, five Mountain Dews and Panda Express that day,” she said with a smile. “He’s probably not going to make any major lifestyle changes but it gives me the opportunity to have a meaningful conversation with him and explain that if we tweak your diet a bit, you won’t get that cramp during a 50-yard touchdown run. It’s just about planting the seed and hoping that it will stick.”

Ball, a former collegiate athlete herself, loves sports, especially football. That sparked her interest to get involved with local teams – but she also sees it as a way to know the community in a different way.

“Family medicine is about families and really getting to know all aspects of the community,” she said. “This is just another avenue to do that. And it is just fun. When I am out there on a Friday night, I don’t think about it as work.”