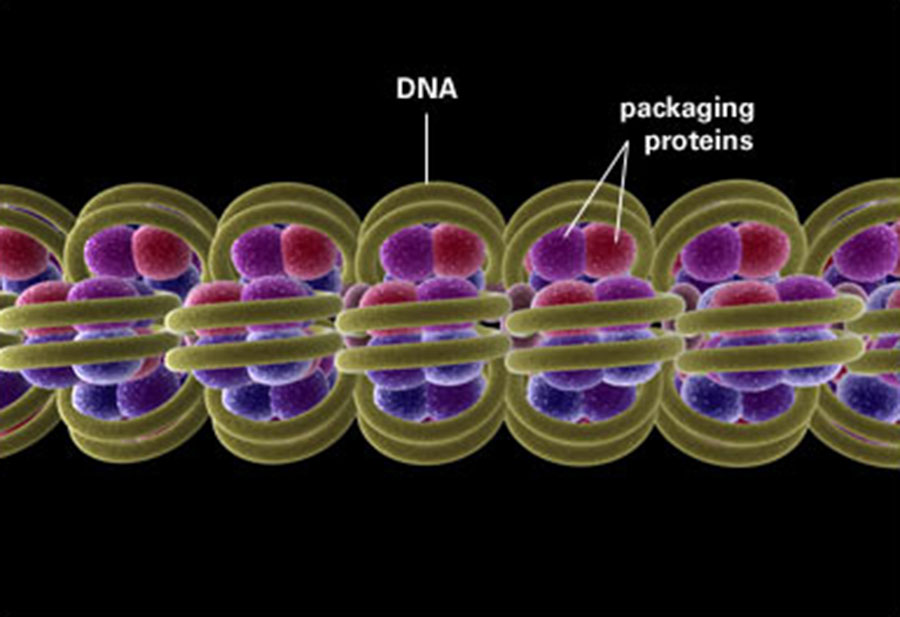 New possibilities for tracing cancer of unknown origin back to the type of cell in which it began are reported today.

The approach benefits from the wealth of information being gleaned from epigenomes.  The epigenome consists of all the chemical packaging and tags attached to genes in an individual’s complete DNA sequence. While these compounds may regulate gene activity, they do not alter the DNA code.

By leveraging the epigenome maps produced by the Roadmap Epigenomics Program – a resource of data collected from over 100 cell types – a multi-instutional research team found that the unique genetic landscape of a particular tumor could be used to predict that tumor’s cell type of origin.

The study provides new insights into the early events that shape a cancer. It also could have important implications for the many patients for whom the originating site of their cancer is unknown.

The paper, “Cell-of-origin chromatin organization shapes the mutational landscape of cancer,” is one of several published today in Nature as part of collection reporting the latest advances epigenomics.

“When people planned the Roadmap Epigenomics Project as a resource focusing on normal cells and tissues, nobody thought about cancer mutations and predicting a cancer’s cell of origin – this wasn’t on anyone’s radar,” said co-senior author Shamil Sunyaev, a research geneticist at Boston’s Brigham and Women’s Hospital, a teaching affiliate of Harvard Medical School.  “Our study suggests that we can now predict, specifically for different cancer types, where mutations will happen in a given cancer and what was that cancer’s likely cell of origin based on genomic sequence.”

Mutations are the driving force behind cancer, but they are not distributed evenly across a cancer cell’s genome.  The researchers, made up of a team from the Broad Institute of MIT and Harvard and the University of Washington in Seattle, hypothesized that this variation in the “mutational landscape” might be influenced by chromatin structure, or the way that DNA is packaged, which varies widely from cell type to cell type.

The National Institutes of Health Common Fund’s Roadmap Epigenomics Program, which set out to chart chromatin features from a variety of tissue types and cell types, gave the researchers a means to test this hypothesis. They looked to see how the genomic sequence of cancer cells corresponded with the chromatin structure of different normal cell types, which is highly characteristic for each cell type. The research team investigated samples from a diverse range of cancer types including myeloma, colon cancer, brain cancer and more. What they found was unexpected: the variation in the cancer mutational landscape was very strongly tied to chromatin structure, and because the chromatin structure patterns of cells are so unique, they could use a cancer’s mutation patterns to predict the likely cell type from which it originated.

About 2% to 5% percent of cancer patients have a cancer whose primary site remains unknown. Cancer of unknown primary origin can pose challenges for treatment decisions, which are often influenced or based on the origin site of cancer.

“This work could have implications for treatment – frequently, we’re confronted in the clinic with individuals that present with metastatic cancer from an unknown primary site, which makes it very difficult to choose the right initial treatment regimen,” said co-senior author John Stamatoyannopoulos, UW associate professor of genome sciences and medicine, Division of Oncology. “Our finding that the pattern of mutations in the cancer’s genomic sequence is such a strong predictor of its originating cell type thus might help guide such treatment decisions, and could be increasingly feasible as cancer genome sequencing becomes more routine.”

Combining epigenomic resources and cancer genomic information may also give researchers insights into an early time period in cancer’s development for which little information is currently available. Understanding how chromatin structure shapes the landscape of mutations in a cancer cell could inform researchers’ understanding of the events that first give rise to cancer, as well as how cancers evolve over time.

“This provides a window into these early, unseen events we never had access to before,” said Sunyaev, who is also an associate member of the Broad Institute and professor at Harvard Medical School. “We can now take advantage of the data that was hidden in these mutational patterns – we don’t fully know how to mine all of that data yet, but it’s likely to hold even more information than what we’ve figured out already.”