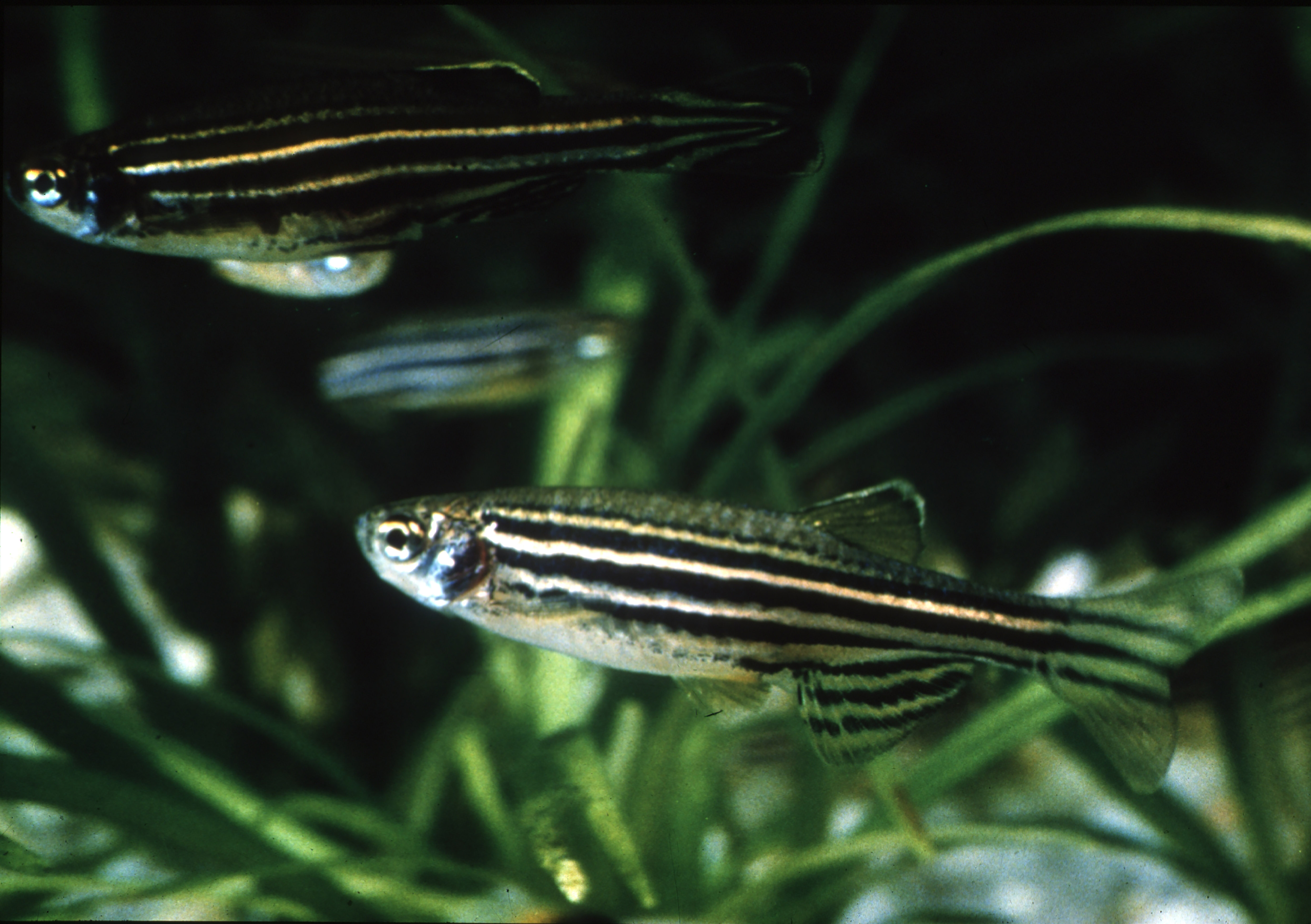 It measures one-inch long. It can heal its heart and regrow some amputated parts. It shares nearly three quarters of our genetic code and reproduces at rates that would make a rabbit blush.

It’s teaching landlubbers an extraordinary amount about what can go wrong inside our bodies.

Meet the tiny zebrafish. Once upon a time, this striped tropical fish mostly swam in aquariums in homes and offices. Since the 1990s, a growing number of scientists have embraced zebrafish as a powerful model to study disease. They’re cheap, spawn by the hundreds, and develop outside their mothers’ bodies. They’re the live fish equivalent of The Visible Man see-through anatomical model.

No wonder the National Institutes of Health recently analyzed grant data and found a 60 percent jump in studies of zebrafish over the past seven years.

Across the UW Health Sciences, 15 principal investigators use zebrafish to study everything from vision and hearing loss to cancer and toxicology. They’re a chummy bunch who meet regularly to discuss current research. The Fish Club is passionate about their tiny subjects. Dr. Susan Brockerhoff, who studies retinal diseases, has been to known use “Zebra Eye” as an online username.

“Once you work with zebrafish, you realize how amazing they are,” said Dr. Eleanor Chen, assistant professor of pathology. She first worked with them in grad school, where their transparency appealed to her as a former art student. Researchers like Chen can easily observe what happens during embryonic development: cells sliding around, organs forming, hearts beginning to beat.

That transparency also shines a light on what happens deep within our bones, said Dr. Ronald Kwon.

“In bone biology, our knowledge lags behind what we know about other tissues because we can’t visualize what’s going on inside,” said Kwon, assistant professor of orthopedics and sports medicine. “With zebrafish we can watch bone formation and regeneration in real-time. It’s like looking through a telescope and seeing unknown planets for the first time.”

The view inside the fish tank

Dr. Evan Gallagher admits being late to the zebrafish party. The toxicologist spent years at Duke University and the University of Florida studying how chemicals interact with different types of wild freshwater and marine fish. Once he came to UW, though, he embraced the zebrafish model to better understand how toxic chemicals caused disease in other fish, including salmon.

“Out of all the fish I’ve worked with over 25 years, the zebrafish provides the most tools and is by far the easiest to work with in the laboratory,” said Gallagher, professor of environmental and occupational health sciences.

Chen, meanwhile, studies a vanishingly rare form of pediatric cancer called embryonal rhabdomyosarcoma. Recruiting enough patients for a clinical trial would be difficult, if not impossible. So she looks to the fish tank.

In a similar boat is Dr. David Raible, professor of biological structure, who helped establish the zebrafish model at UW two decades ago. He studies hearing and balance disorders, which affect some 40 million Americans. The inner ear is tucked behind the hardest bone in the human body. He, too, then turns to the tank.

How could a tiny fish teach anything about hearing? The zebrafish uses what’s called a lateral line system to sense flowing water and movement. At the cellular level, that system is strikingly similar to how the inner ear senses sound, Raible said. So are the genes involved. A large number are orthologs, meaning they evolved from a common ancestor. When Raible’s lab studies what goes wrong in the zebrafish, they’re also learning the same about people.

Beyond unlocking the genetic puzzle of disease, zebrafish assist with drug discovery. They easily fit into postcard-size 96-well plates which can quickly be screened with large numbers of compounds. That lets researchers like Raible and Brockerhoff speed up their search for promising drugs that might counteract the loss of sight and hearing.

“We can’t do that on human patients, right?” rhetorically asks Brockerhoff, who is a professor of biochemistry. “The goal is to treat and cure disease in humans, but we have to test ideas using a model system.  The zebrafish is a perfect model to study how and why retinal degeneration happens, and how we can prevent it.”

That speed and efficiency of screening is something that can’t be done with mice, the most popular animal model, Raible said. “We can screen 10,000 compounds in 10,000 animals in a way that just isn’t possible in any mammalian model.”

Yet mouse people sometimes look down on fish people.

Like partisan sports fans the world over, researchers champion their own model organisms. The gold standard has long been mice. Some researchers who study mice wonder what the zebrafish could teach about human disease. They are a much more distant relative on the evolutionary tree.

Kwon knows that skepticism firsthand. Some of his colleagues have given him grief for studying zebrafish. (“Do fish even have mineralized bones?” “Do you really think the NIH is going to fund this?”) As a new professor switching model systems, he admitted uncertainty when he decided to join “the fish people,” as he calls his fellow researchers.

As the field of genomics exploded over the past two decades, the zebrafish made its case. It’s simple math, Kwon said. There are roughly 20,000 human genes. Bone researchers are discovering that many genes are involved in the skeleton. For example, upwards of 10,000 have been found to be active during bone healing.

“Generating mutant mice is slow. The bone biology field is able to generate 10 new mutant mouse lines a year,” Kwon says. “If 10,000 genes are being activated, it would take 1,000 years to study them all.”

Perhaps one day we won’t need to use animals to study disease, said Dr. George Sanders, a lecturer in comparative medicine and the veterinarian who oversees the UW’s aquatic animal program. That day isn’t here. “We can’t do everything in cell culture or on computer, at least not yet,” he said. We should forge ahead ethically, he added and with the lowest sentient beings possible. Fish fit that bill.

The Fish Club swims on. Kwon acknowledges his colleagues’ skepticism still stings. Meanwhile, he and other researchers continue to advance understanding of the human body and what can wrong with it, based on studies of the little zebrafish. In fact, Kwon is preparing to move his zebrafish tanks to a much larger lab at UW as his research, and his tiny subject, gains prominence.