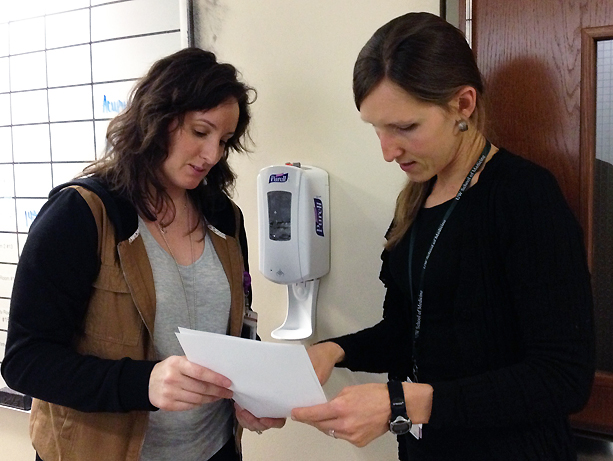 [Editor's note: In mid-2014, we reported on a team of students preparing to study high-use patient population. Here is our follow-up story.]

Social and economic hardship explains why some patients return to the hospital time and again, a team of University of Washington students found in a six-month project.

“Healthcare providers need to be aware of the chaos in some patients’ lives,” said Eliza Hutchinson, a fourth-year medical student who organized the team – one of 10 across the country participating in the Student Hot Spotter Minigrant Project.

The terms “hot spotter” and "super-utilizer" (see box at right) relate to the disproportionately high use of medical services by a small percentage of the general population.

The UW students, with a cross-section of health-sciences perspectives, made a special effort to get to know four super-utilizers, talking with them in the hospital and at their homes after they were discharged.

The students focused on listening to patients tell their own stories, said Sheridan Reiger, a fourth-year medical student who also has a master’s in public health. “I told our patient at the outset that I was there to learn from him – that there were things that he knew that I had no ability to discover on my own without his help, and I would do my best to understand.”

Reiger’s group followed a man in his 60’s with chronic pain and severe respiratory disease, and learned he had little support outside of the hospital.

“He lived in [Seattle's] Central District, where he had grown up, but he wasn’t really in touch with his family. He didn’t have a partner. Through his life he had managed to push quite a few people away. He was pretty isolated.”

Another patient, a young woman in her 30’s who had emigrated from Asia, had good social support but cultural issues hindered the management of her disease at home. The patient had lupus, a severe autoimmune disease.

“She was a near-perfect patient,” Hutchinson said: She had a good relationship with her primary care provider, took her medicines and came to follow-up appointments.

But her medical bills had bankrupted her family. It also became clear to the students that, although she spoke English, she often did not understand the language as well as her healthcare providers thought she did, To remedy the language barrier, the team engaged a cultural navigator to interpret during clinic visits and to culturally tailor providers' instructions about nutrition.

"Also, because of our long conversations with the patient in the comfort of her home, we learn that she was quite depressed. So we connected her with Asian Counseling and Referral Services. She now receives culturally appropriate mental health treatment. These have been tremendously powerful changes in her life," Hutchinson added.

The home visits were crucial to understanding the challenges these patients face day-to-day, Hutchinson said.

“You saw how they lived, the physical challenges they faced, and the patients were often more comfortable talking to us in their homes than they were in hospital rooms.”

The patient that Anastasia Mallillin, in her second year of pursuing masters’ degrees in social work and public health, followed was a man in his 60s with multiple chronic medical conditions including diabetes and hypertension. He had been admitted to the hospital for cellulitis, a serious skin infection, once during the summer, again in September and again in January.

Mallillin described him as “a very positive, upbeat guy” who had an extended family and who got on well with the hospital staff.

“Initially, we were not sure how we could help him. He already had a lot of services. We were not clear we could have an impact.”

It turned out he had concerns he might not have mentioned to his care providers. Some were relatively simple to address, and the team worked with him to achieve a list of goals: getting a new walker, enrolling in physical therapy, and renewing his driver’s license.

Getting these things done, however, proved surprisingly difficult, the team found, mostly because of systematic barriers.

“There’s a lot of red tape. I understand why it’s there, but it can make it hard to be efficient,” Mallillin said.

She said it helped the students to think broadly about issues facing patients, whether it’s finding food that is familiar to them, or a walker that can double as a seat when fatigue sets in, or arranging transportation to appointments.

Sheridan Reiger agreed. “If we have a patient in the hospital and ready for discharge, we need to constantly ask ourselves: What is it that will bring them back? How do we use components of the system, whether that be community health workers, follow-up nursing phone calls or something else, to keep them healthy and at home?

"This is the way we need to think about patients: ”

Project Funding: The project was sponsored by the Association of American Medical Colleges; the Primary Care Progress, a nonprofit that promotes primary care; and the Camden Coalition, a nonprofit in Camden, New Jersey that works to coordinate the city’s health care providers and social services.