To teach suicide care is to confront bias, fears, reality

To teach suicide care is to confront bias, fears, reality 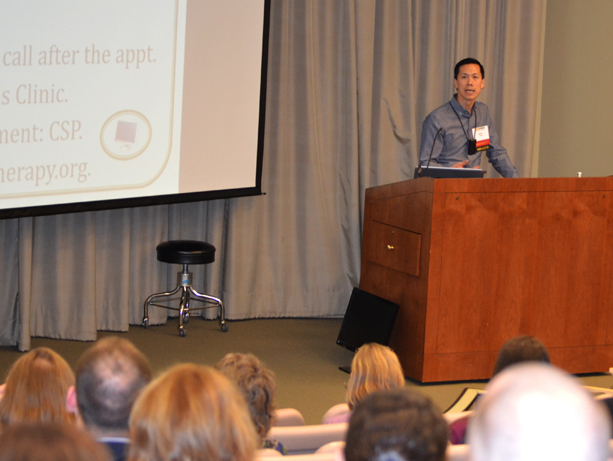 Dr. Jeff Sung first felt the anguish and guilt of losing a patient to suicide when he was a UW resident training in psychiatry and behavioral sciences.

“I had just seen the person the previous day.  My initial feeling was shock and disbelief, and then dread and confusion. The next day felt surreal. Should I keep seeing patients? Should I talk to the family? What would I say?”

His patient’s death in 2001 prompted him, in the years that followed, to teach other psychiatry residents how to prepare for and manage such an unsettling event.

“The idea of patient’s suicide death  was so distressing that the residents had trouble hearing anything else I said,” Sung recounted about his first few classes. “I learned that they needed a framework for suicide risk assessment, management and treatment to regulate their distress. I had to learn how to teach suicide care.”

Today Sung instructs a broader audience – Washington state caregivers of all stripes who must comply with a 2012 law mandating training in suicide care. Sung’s six-hour seminar is one of 10 approved to fulfill the state requirement.

He’s taught four sessions for physicians so far, each filled to its 100-person capacity. About half of the attendees are psychiatrists, a fourth are primary-care doctors, and the rest span specialties from dermatology to neurosurgery to oncology.

It can be an uphill slog. Whatever their interest in improving skills, some class attendees fear asking a patient: Are you thinking of suicide?  Some doubt that a caregiver can influence someone who’s seriously mulling self-destruction.

It also is “exceedingly difficult,” he said, to get a person timely treatment with a mental-health professional. This reality contributes to pessimism towards suicide care among physicians, he said.

“Treatment for suicide risk isn’t always readily available. Some healthcare systems don’t have the behavioral health resources to care for people at risk of suicide. If you teach a group of physicians how to ask the hard questions, how to show you care, and how to refer someone for help – but the help isn’t actually available – then all you’ve done is frustrate the patient and physician.

The first step to reducing suicide in healthcare systems is to counter the pessimism and show that progress can happen, Sung said.

For example, in 2001, the Henry Ford Health System in southeast Michigan undertook an initiative to eliminate suicide among patients. The system overhauled the way it identified and managed depression and suicide risk.  The effect was enormous:  Patient suicides fell 75 percent, from 89 to 22 per 100,000 from 2001 to 2005. Then, in 2009, no patients died by suicide.

The achievement became a prototype for improving depression care. For Sung, the case study is a proof point to offer skeptics.

“Many people who die by suicide have had previous contact with a healthcare system. So we have to believe [change is possible] at least within our scope of influence – within our medical system or within our office visit. Even if we don’t have all the resources we need, there are still many things we can do.”

Two randomized controlled trials have shown that connectedness between a caregiver and a patient can prevent suicide. (Study 1, Study 2)

“Telling someone ‘You matter to me’ and ‘We’re going to get through this together’ can be powerful,” Sung said. In both trials, fewer suicides emerged among those who witnessed this concern than among the cohorts that did not.

Dr. Chris Gaynor, a family physician with Qliance in Seattle, said Sung’s class was a revelation.

“I was one of the people who held the erroneous assumption that if someone wants to commit suicide, there’s nothing that I can do. Jeff shared data that was very convincing that there are things we all can do to intervene. Also, the follow-up he recommends based on successful programs, in that once you do identify someone, intermittent phone calls expressing care might affect whether they follow through on a referral for psychological or psychiatric care. That was compelling.”

Gaynor related how he also has changed his approach to giving patients the PHQ-9 depression-screening, in which patients select 0, 1, 2 or 3 in answering nine questions. A high total indicates more likely depression.

“I never looked at responses to specific questions – just got an overall sum,” Gaynor said. “Now I specifically look at what the patient records under No. 9, which is about suicidal thoughts. If they select anything other than zero, then I question the patient further.”

Every so often, Sung gets an email or call from a clinician who has been through his course.

“They’ll say that, within a week of the class, a relative or friend told them they were suicidal, and the clinician used some of the skills they learned to help. It’s very powerful. It’s very meaningful.”