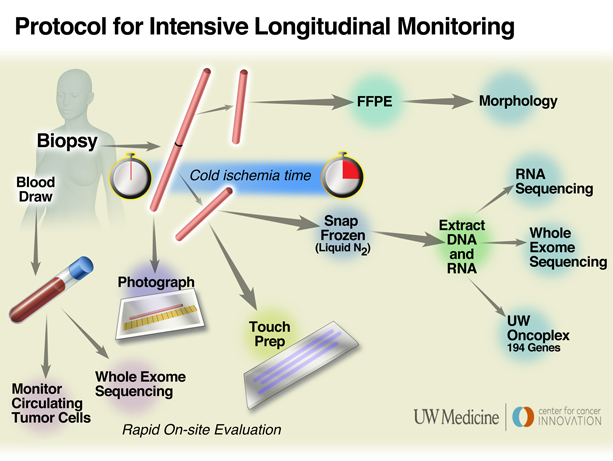 A new report documents one cancer patient's experience with an unprecedented level of individualized care, provided through the University of Washington Center for Cancer Innovation.

In the study, 32 experts from 14 institutions teamed to identify potential interventions for a patient with metastatic triple-negative breast cancer, an especially aggressive cancer that is widely considered incurable. Despite the intensified approach, the female patient succumbed to the disease, and the effort was not immune to insurance and drug-availability obstacles that hamstring many patient cases.

The research, led by Dr. Anthony Blau, the center's director, is published in January's Journal of the National Comprehensive Cancer Network.

The patient was the first involved in the "Intensive Trial of OMics in Cancer" (ITOMIC). which deeply characterizes and tracks a tumor's molecular features, aggregates experts to generate hypotheses regarding treatments predicted to be beneficial, allows these predictions to be tested, and learns from these experiences to help future patients.

“On a molecular level, every cancer is unique. By breaking down institutional barriers, this collaborative study brings a no-holds-barred effort to trying to help an individual cancer patient using tools that virtually unite experts from around the world," said Blau, professor of medicine in the UW's Division of Hematology.

The patient's markedly elevated circulating tumor cells were monitored 48 times over nine months. The care team biopsied multiple regions of the patient’s tumor for researchers to perform whole-exome sequencing, RNA-sequencing, and deep sequencing of a panel of cancer-associated genes. Data from these initial biopsies and from repeated samplings throughout the patient’s disease course were shared securely over the Internet and accessed by researchers at multiple institutions.

Over the course of the patient’s illness, the researchers hypothesized two treatments to which the patient's tumor might respond.

The first came from experts in Seattle; Boston; Portland, Oregon; Lawrence, Kansas; Taiwan; and Germany. It predicted that a U.S. Food and Drug Administration-approved drug used in certain forms of lung cancer, might be effective. However, the drug, crizotinib, costs nearly $10,000 per month, and since it is not approved for breast cancer, the patient’s insurance company refused to pay for it. With assistance from the research team, the patient’s attending doctor was able to obtain crizotinib from the manufacturer at no cost.

However the prediction proved wrong, as the patient did not respond. A second prediction emerged from the ad hoc development of a high-throughput screen that tested the patient’s circulating tumor cells against a panel of 160 drugs. Two inhibitors of molecular target known as Bcl-2 were predicted to be effective, but researchers were unable to obtain either drug from the pharmaceutical manufacturers, even though these same drugs were being tested in clinical trials for other cancers. The patient died shortly thereafter.

“This case highlights the complexity involved and the investment required for implementing true precision medicine. It also underscores some of the challenges faced in bringing molecular medicine to the bedside,” said Dr. Margaret Tempero, editor-in-chief at the journal and a cancer specialist at the University of California, San Francisco.

To date, 12 patients have enrolled in the study, which began in October 2013.

“The ITOMIC studies are about learning. While we pull out all stops to try to help our patients, we receive far more from our patients than we are able to give. The patients who enroll in this study, as exemplified by the patient described in this initial report, are true heroes. They are hugely motivated by the knowledge that their experience with cancer might help future generations of patients,” Blau said.