Laws have not kept up, say officers, while acknowledging their own guilt and biases involving phone use
Mark Gudmastad
09/26/2016 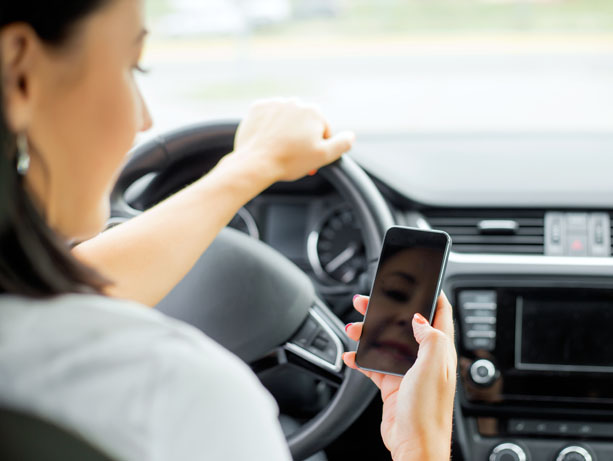 Laws intended to curb distracted driving, mainly targeting cell phone use, have not kept pace with technology and can be difficult to enforce, according a new study led by University of Washington researchers. What’s more, the application of these laws may depend on the personal views of law-enforcement officers.

The findings were published this month in Injury Prevention.

“These results underscore the importance of cultural norms on the way our laws are perceived and enforced,” said senior author Dr. Beth Ebel, a trauma pediatrician and University of Washington professor of pediatrics. “Most young drivers today wouldn’t dream of driving intoxicated. That’s a change from even five or 10 years ago. We need to see that same change around distracted driving.”

In 2014, nearly a half-million people in the United States were in injured in motor vehicle crashes involving distracted drivers. Forty-six states and most nations have distracted-driving laws; many, though, focus narrowly on email and texting, allowing a slew of other phone applications to remain within the letter of the law.

Officers who were surveyed uniformly expressed that distracted-driving laws needed to be updated, and suggested three criteria for crafting effective legislation:

“Officers told us they don’t want to know what someone is typing on their phone – just that they shouldn’t be doing it. The distinction between checking sports scores and sending a text shouldn’t need to be deciphered on the side of the road by law enforcement,” Ebel said.

King County prosecutor Amy Freedheim, a co-author on the study, said using the phone while driving should not be tolerated. “It’s impaired driving, and we all want our loved ones to get home safely.”

The study, funded by the Robert Wood Johnson Foundation, found that some officers themselves were distracted drivers. They acknowledged actions such as typing on the patrol car computer or sending text messages while driving. Chiefs of police and state patrol leaders have responded by establishing policies that ban distracted driving for officers.

Officers’ personal views also were found to be in play in carrying out the law.

“The key for enforcement, I think, is that officers will enforce a law if it touches their core value,” one officer said.  Such comments led the researchers to recommend that officers receive formal training on the direct link between distracted driving and injury. Ebel and the collaborators also worked with local agencies to create a video that addressed how to best enforce current laws.