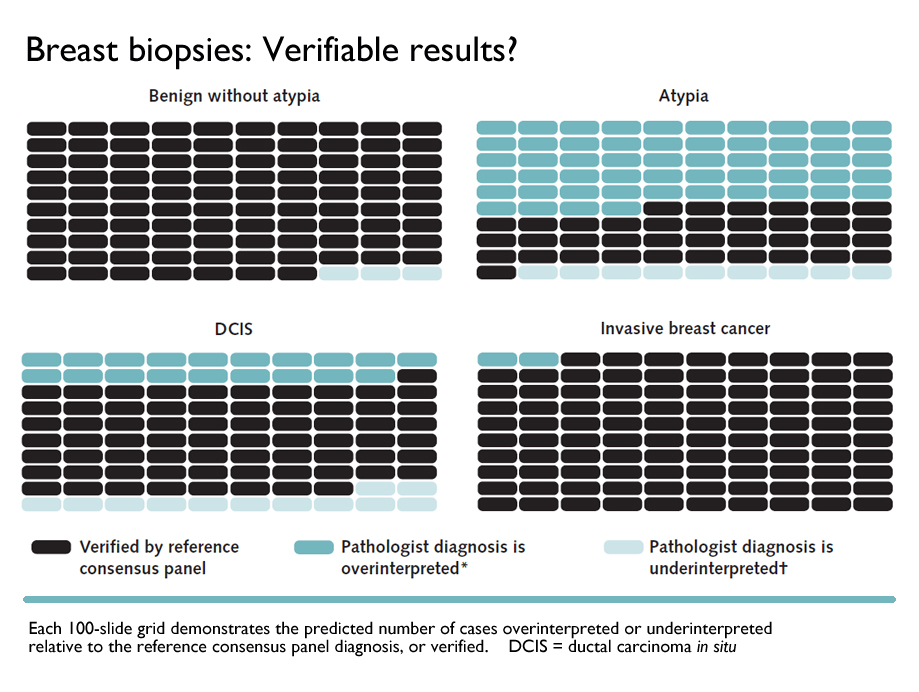 Every year, millions of women undergo an anxiety-fraught breast biopsy, usually obtained on the heels of a breast lump or uncertain mammogram. Their hope and expectation is that the tissue sample will clarify whether there’s anything to worry about.

In many cases, however, biopsies have too much uncertainty for interpretation, according to a new study led by Dr. Joann Elmore, a University of Washington physician and nationally recognized expert on mammography and breast cancer. The study was published today in the Annals of Internal Medicine.

Elmore recommends women with a diagnosis of atypia and ductal carcinoma in situ (DCIS) get a second opinion and get educated on these diagnoses.

While it’s relatively easy to identify benign breast tissue and, at the other extreme, invasive breast cancer, the diagnoses of atypia and ductal carcinoma in situ (DCIS) are prone to elicit differing opinions among pathologists, the study found.

“We diagnose patients based on a tissue sample that is visually examined under a microscope by a pathologist, ” said Dr. Joann Elmore, a University of Washington physician and nationally recognized expert on mammography and breast cancer. “This is a consultation with an element of subjectivity; we don’t put the biopsy tissue into a machine and get an unquestionable answer. We’re stuck with a diagnostic classification system that works well in the two extremes but less so in gray-area diagnoses of atypia and DCIS.”

The National Cancer Institute defines atypia as “an abnormality in cells in tissue” and DCIS as “a noninvasive condition in which abnormal cells are found in the lining of a breast duct [but] have not spread outside the duct.” Each year in the United States, more than 100,000 women are diagnosed with atypia and 60,000 women with DCIS, said Elmore.

Research by Elmore's team has previously shown that breast biopsies can spur variable interpretations. This new study augments that by providing estimates of diagnostic disagreements at the U.S. population level.

Dr. Joann Elmore: "I encourage women who receive an initial diagnosis of either atypia or DCIS to realize that they do not need to act immediately on the results; they have time to obtain a second opinion to verify the diagnosis."
Dr. Joann Elmore

Elmore and colleagues enlisted three world-class experts in breast-cancer diagnosis to independently review biopsy samples from 240 patients. The experts established a reference diagnosis on each case. More than 100 study pathologists then participated in interpreting some of these biopsy cases and the results were merged with U.S. population-based screening data to provide estimates of the predictive value of an initial biopsy interpretation; in other words, in the United States, what is the likelihood that an initial diagnosis of atypia or DCIS would be verified if the same biopsy slide were reviewed by the three experts.

“Women who initially received the diagnosis of atypia – and more than 100,000 women a year get that diagnosis in the U.S. – the experts downgraded more than half of those to normal benign tissue without atypia,” Elmore said.

“With DCIS, the experts downgraded 19 out of 100; that’s 19 women who might have heard ‘atypia’ instead of ‘carcinoma’ in their diagnosis,” she added.

Elmore likened a diagnosis of DCIS to a Stage 0 cancer. “It can be a very scary diagnosis for women because of the word ‘carcinoma.’ Women with this diagnosis often opt for the same treatment that women with Stage 1 cancer get, like lumpectomy with radiation or even mastectomy," she said. "There is a growing concern that DCIS is being overdiagnosed and overtreated."

Elmore acknowledged that most second opinions in clinical practice do not have the benefit of world-class expertise. A second limitation of the study is that the pathologists gave interpretations based on only one slide per case, and lacked access to additional testing, an opinion from a professional colleague, or the patients’ clinical histories.

Nevertheless, she said, the study reveals enough discordance about diagnoses of atypia and DCIS to encourage people to not jump to treatment based on an initial finding.

"Undergoing a breast biopsy can be an anxiety provoking experience for women and their loved ones,"Elmore said. "I encourage women who receive an initial diagnosis of either atypia or DCIS to realize that they do not need to act immediately on the results; they have time to obtain a second opinion to verify the diagnosis and to become educated about these diagnoses to make informed decisions."

The Annals of Internal Medicine published an accompanying editorial about the paper.  Elmore also produced a video commentary about the findings.