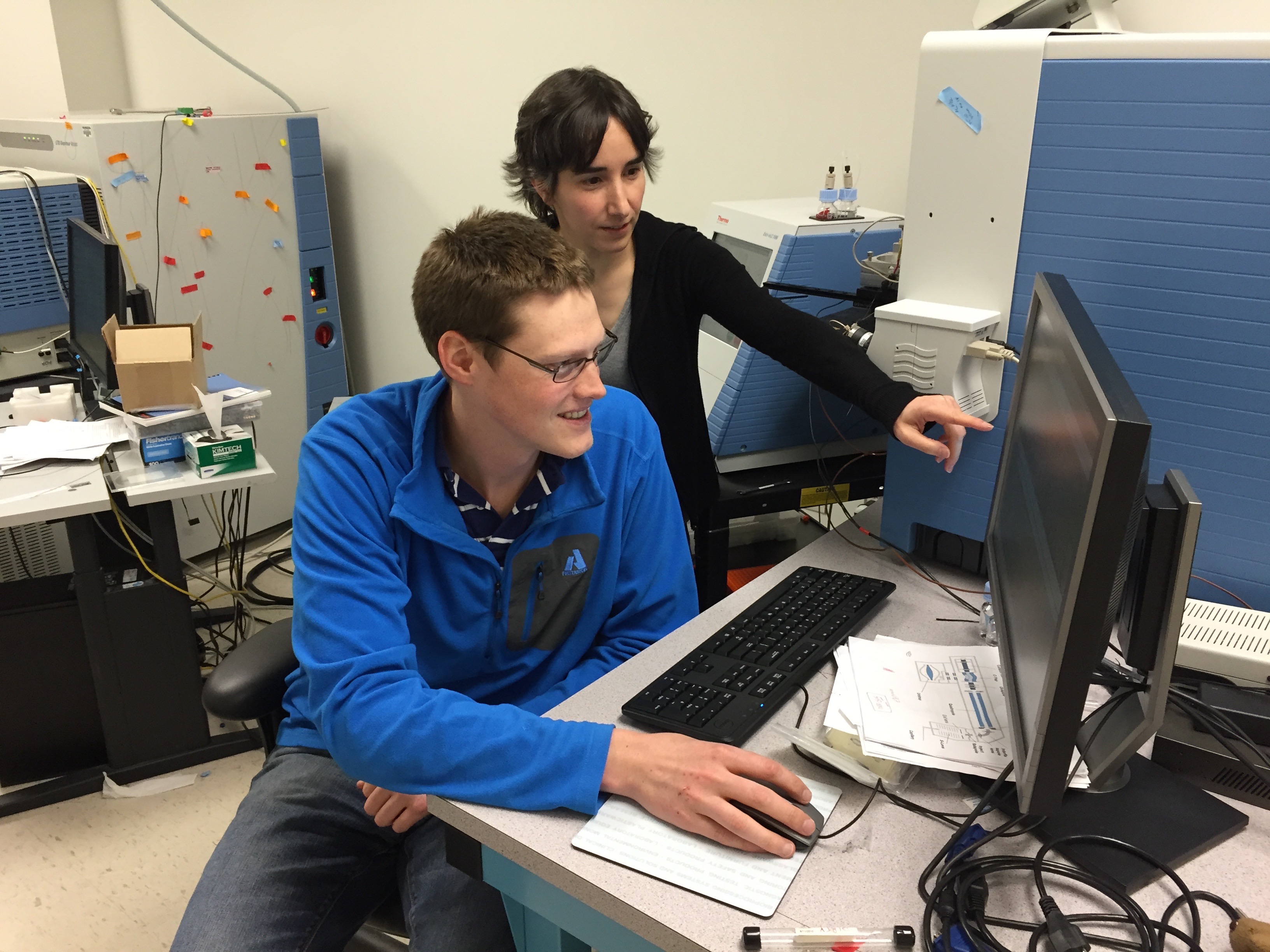 An exhaustive analysis has been conducted of more than 12,000 distinct proteins present in an often aggressive and difficult to treat form of breast cancer, called triple-negative breast cancer.

The results may help explain why these cancers often fail to respond to current drug treatments and may provide researchers with new targets for drug therapy.

The researchers’ findings appear in this week’s issue of the journal Cell Reports. Robert Lawrence, a University of Washington graduate student in molecular and cellular biology, is the lead author of the article, “The proteomic landscape of triple-negative breast cancer.” Dr. Judit Villén, UW assistant professor of genome sciences, is the paper’s senior author.

Triple-negative breast cancer cells have low levels of three receptors found in many breast cancers. Two receptors are for the hormones estrogen and progesterone and one receptor is for human epidermal growth factor receptor 2 or HER2.

The study was performed in collaboration with the labs of Su-In Lee, assistant professor of genome sciences and of computer science and engineering, and Anthony Blau, director of the UW’s Center for Cancer Innovation. Both co-authored the study.
pictures of Su-In Lee and Anthony Blau of the University of Washington

About one in five breast cancers are triple-negative. They tend to be more aggressive and  grow and spread more rapidly. They are also less likely to respond to many standard treatments. Triple-negative breast cancer occurs more often in women under age 40 and in African American women.

In the new study, the researchers used a technique called mass spectrometry to identify and quantify the proteins being produced in twenty breast cell lines and four breast tumor samples. This process is called proteomic analysis. The study was performed in collaboration with the labs of Dr. C Anthony Blau, director of the UW’s Center for Cancer Innovation and Su-In Lee, assistant professor of genome sciences and of computer science and engineering, both co-authors on the study.

Analysis of the mass spectrometry data revealed that subtypes within these cancer samples could be identified on the basis of the types of proteins they expressed and the quantity of those proteins.

“In terms of the protein expression, even within these subtypes, the cells are very different from one another, which suggests they will behave differently and respond to treatment differently,” Lawrence said.

To further explore the relationship between genes, proteins and drug response, the researchers correlated their proteomic findings with existing genomic databases and conducted drug sensitivity tests on 16 of the cell lines.

Their findings suggested why one drug that might work in one case of triple-negative cancers might fail to work on another. For example, the researchers found that some of the triple-negative breast cancer cells produced low levels of proteins involved in cell proliferation while producing high levels of proteins that allow cells to spread. Because  most conventional chemotherapy targets pathways that promote proliferation, these cells would likely be able to resist standard treatments.  Treatments that target the means by which the cancer spreads may, therefore, prove more effective against triple-negative breast cancers that resist conventional therapy.

To make their findings available to other researchers, the UW team has created a website (https://zucchini.gs.washington.edu/BreastCancerProteome/) where the new proteomic and drug sensitivity findings as well as genomic data can be accessed.

“We want this to be a resource for researchers everywhere,” Villén said. “Investigators will be able to go to the site and type in the name of their protein of interest and see how it is expressed in these cells. Or they can type in the name of a drug and see which genes and proteins are associated with the tumor’s sensitivity or resistance to the drug.”

Villén expects in the coming year that proteomic analysis will be used in clinical trials, such as the Center for Cancer Innovation’s clinical trial in metastatic triple negative breast cancer.. Currently, using mass spectrometry, her lab can  analyze a tumor sample in 24 hours. She expects that once researchers determine the 100 or so most important proteins, a tissue sample could be tested in just an hour. This analysis will provide a more detailed diagnostics of breast tumors, and may offer novel therapeutic avenues for resistant tumors.

In addition to Blau, Lawrence, Lee and Villén, co-authors were Elizabeth M. Perez, Daniel Hernández and Kelsey M Haas, of the UW Department of  Genome Sciences,  Chris P. Miller of the UW Center for Cancer Innovation and Hanna Y. Irie of the Icahn School of Medicine, Mount Sinai, in New York City.

The research was supported by Howard Temin Pathway to Independence Award K99/R00 from the National Cancer Institute at the National Institutes of Health  (R00CA140789); a National Science Foundation grant (DBI-1355899); and funds from the South Sound CARE Foundation, the Washington Research Foundation, and the Gary E. Milgard Family Foundation.