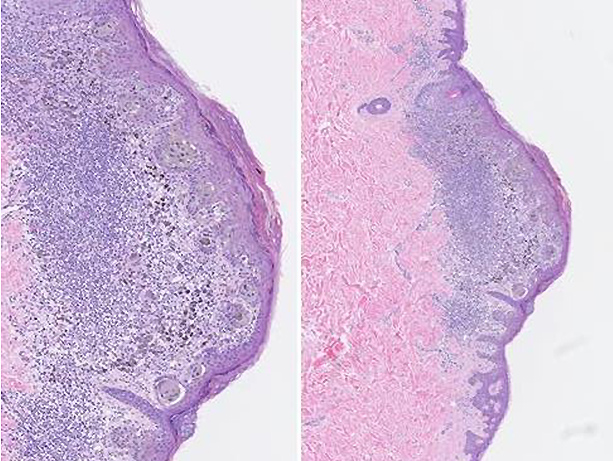 Every year, millions of Americans have a suspicious mole or skin lesion biopsied and sent to a pathologist to learn whether it is a potentially deadly melanoma. The pathologist’s interpretation is important: If the lesion is judged to be benign, no treatment may be recommended, but if malignant, the patient will typically undergo surgery and possibly other treatments.

New research indicates that pathologists are likely to agree when lesions are benign or highly malignant, but often disagree when there are challenges to how gray-area lesions are characterized.

The study appears June 28 in The BMJ (British Medical Journal). Its lead author was Dr. Joann G. Elmore, a professor of medicine at the University of Washington School of Medicine in Seattle. ( See embargoed galley proof of paper.)

“We found that pathologists’ interpretations of biopsies for certain gray-area lesions indicate that accuracy and reproducability can be affected,” Elmore said. “These findings underscore how challenging it may be to make these judgements in clinical practice.  Such interpretations could be improved by using a standardized classification system,which could reduce the risk of misdiagnosis and inappropriate treatment.”

The investigation involved 187 experienced pathologists in 10 states, who had volunteered to participate. In the study’s first phase, each was asked to review and interpret 48 cases randomly selected from 240 skin biopsies. In the second phase, 118 of the pathologists viewed the same set of slides that they had interpreted before but shuffled in a different order. At least eight months had passed between the first and second viewings of the slides.

The pathologists’ interpretations were then organized with the Melanocytic Pathology Assessment Tool and Hierarchy for Diagnosis (MPATH-Dx) histology form, which placed each interpretation into one of five diagnostic classes:

I) benign lesions that require no further treatment;

II) moderately abnormal lesions in which the removal of a small margin of tissue around the lesion is suggested;

III) severely abnormal lesions, including melanoma in situ, in which a slightly larger margin is suggested;

IV) early stage invasive melanoma, in which case a margin ≥1 cm is recommended;

“This low level of diagnostic precision is of clinical concern,” the researchers wrote. “Although diagnostic discordance has been described in other areas of clinical medicine, including pathologists diagnosing breast biopsies and radiologists interpreting mammograms, the findings reported here are more pronounced than in other fields of medicine.”  In the associated opinion piece from the lead author, Dr. Elmore emphasizes that ”the diagnostic variability that we found does not mean that pathologists are the problem,” adding that ”pathologists embrace this responsibility with the utmost skill and thoughtful commitment.”

In addition to adopting more standardized classification systems, physicians could communicate to patients that there are limits to medical professionals’ ability to classify skin lesions, the researchers wrote.  “We propose adding standardized statements to pathology reports reminding readers that melanocytic lesions are challenging to interpret and that variability exists among pathologists, especially in the middle diagnostic classes,” they wrote.