1.6 million women a year undergo procedure; differences in diagnoses shed light on prospects for over- and under-treatment
Brian Donohue
03/17/2015 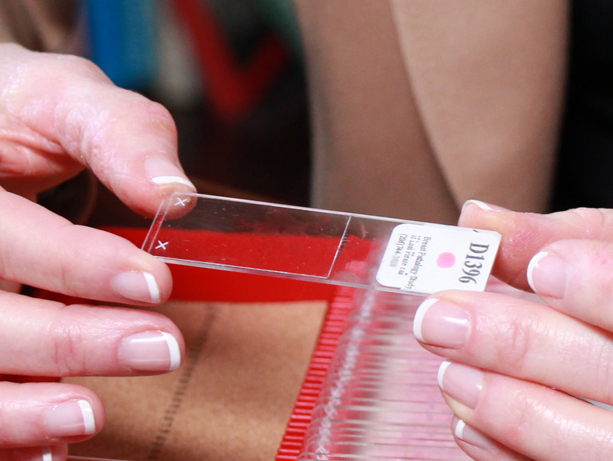 Interpreting breast biopsies is a challenging task for U.S. pathologists, suggests new research led by the University of Washington. While agreement among pathologists was excellent on diagnoses of invasive breast cancer, evaluating cases with ductal carcinoma in situ (DCIS) and atypical ductal hyperplasia, or atypia, showed substantial disagreement.

The study will be published March 17 in the journal JAMA.

Each year 1.6 women in the United States undergo a breast biopsy to see if they have breast cancer. The accuracy of pathologists' diagnoses is an important and inadequately studied area. Although nearly 25% of biopsies demonstrate invasive breast cancer, the rest are categorized by pathologists according to a diagnostic spectrum that ranges from benign to pre-invasive disease.

Two diagnoses are associated with significantly higher risks of subsequent invasive cancer: Atypia is a benign lesion of the breast, and DCIS is a lesion of abnormal breast cells that have not spread outside the duct into normal surrounding tissue. Women with either of these findings on breast biopsy may consider additional surveillance, prevention or treatment to reduce their risks.

The incidence of atypia and DCIS has increased over the past three decades as a result of widespread mammography screening. Misclassification of breast lesions may contribute to either over-treatment or under-treatment.

Dr. Joann Elmore, a UW professor of internal medicine, and colleagues compared the extent of diagnostic agreement between 115 pathologists who interpret breast biopsies in practices in eight U.S. states with the reference diagnosis established by a three-member panel of experienced breast pathologists.

"It was reassuring that there was near-perfect agreement on the diagnosis of invasive breast cancer," Elmore said, "but for pre-invasive DCIS, while four out of five pathologists might agree on a diagnosis, one out of five times, they're disagreeing and calling DCIS either invasive or atypia.

“This is troubling when you know that women with a DCIS diagnosis are having mastectomies or lumpectomy and radiation therapy. And there was even less agreement on diagnoses for atypia -- equivalent to the chance of heads or tails on a flip of a coin," Elmore said.

Participants independently interpreted slides between November 2011 and May 2014 from test sets of 60 breast biopsies (240 total cases, 1 slide per case), including 23 cases of invasive breast cancer, 73 DCIS cases, 72 atypia cases, and 72 benign cases without atypia. Reviewers were blinded to the interpretations of other study pathologists and the three panel members. Among the panel members, all three agreed on the diagnosis in 75 percent of cases, and agreement of their initial independent diagnoses with the final consensus-derived reference diagnoses was 90 percent.

The participants agreed with the consensus-derived reference diagnosis on less than half of the atypia cases, with a concordance rate of 48 percent. The overall concordance rate for benign without atypia was 87 percent; for DCIS, it was 84 percent.

ThinkStock
The incidence of atypia and ductal carcinoma in situ has increased over the past three decades as a result of widespread mammography screening.
mammography image of a woman's breast

Disagreement with the consensus-derived reference diagnosis was significantly more frequent when breast biopsies were interpreted by pathologists with lower weekly case volume, from non-academic settings, or smaller practices; and from women with dense breast tissue on mammography (vs. low density), although the absolute differences in rates according to these factors were generally small.

“The variability of pathology interpretations is relevant to concerns about overdiagnosis of atypia and DCIS. When a biopsy is overinterpreted (e.g., interpreted as DCIS by a pathologist when the consensus-derived reference diagnosis is atypia), a woman may undergo unnecessary surgery, radiation, or hormonal therapy. In addition, overinterpretation of atypia in a biopsy with otherwise benign findings can result in unnecessary heightened surveillance, clinical intervention, costs and anxiety,” Elmore and colleagues wrote.

“Given our findings, clinicians and patients may want to obtain a formal second opinion for breast atypia and DCIS prior to initiating more intensive surveillance or risk reduction using chemoprevention or surgery."