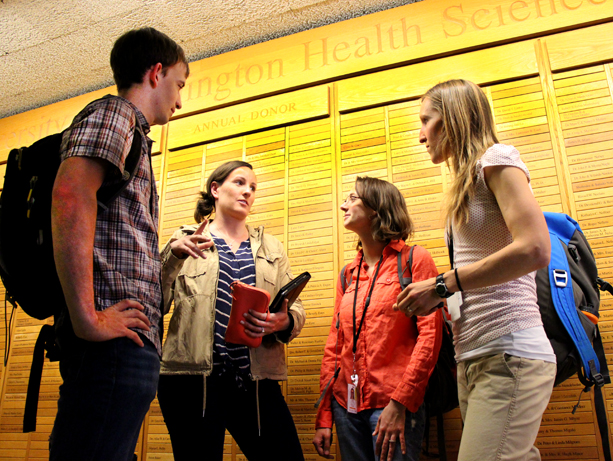 Between college and med school, Eliza Hutchinson spent a year in an outreach role, tending to youths who lived on Boston’s streets.

“They got healthcare either through the free services that we provided or by getting very sick and going to the emergency room. Then they would not have any follow-up care and they’d be back on the streets with the same problem,” she recounted.

It wasn’t until about two years ago that, as a fledgling UW medical student, Hutchinson associated that population with a term she heard at school – “high-utilizers,” used to describe the 5 percent of patients who account for 50 percent of U.S. health spending, according to the Agency for Healthcare Research and Quality.

Today Hutchinson is leading a group of UW student “hot spotters,” one of 10 teams nationwide, on a six-month journey to better understand barriers and breakdowns that contribute to people becoming high utilizers, and how that population’s care might be coordinated better.

“Are these problems that medicine can really address? That’s the zillion-dollar question,” Hutchinson said. “We see the results of all those social forces at work – homelessness, people not speaking English, people being laid off, not having easy transportation. You might wonder if we are spinning our wheels to focus on a problem we can’t solve in a 15-minute clinic visit.”

Clinicians at Harborview Medical Center will identify high-utilizing patients and the students will work closely with four or five who are amenable to sharing their health conditions and life circumstances.

“Our goal is to not only learn from their medical records but to interview them, to go to doctors’ appointments and the pharmacy with them, to learn about their medical conditions and where they struggle in the healthcare system,” Hutchinson said.

The project, sponsored by the Camden (NJ) Coalition of Healthcare Providers, is founded in thinking once considered audacious but now being borne out as practical: expanding the definition of “healthcare” to include housing and job training.

In a bold experiment, New York state last year identified populations for whom investment in housing could reduce inpatient stays and emergency department visits. Illinois Medicaid proposed to use part of its 2015 budget for job-training.

“It’s the ‘upstream’ idea,” Hutchinson said. “We invest more upstream instead of waiting for people to show up in the emergency room, at which point we are resuscitating and taking extreme measures and spending lots of money.”

“When people are using a high level of services, they generally have multiple diagnoses and multiple medical, mental-health and substance-abuse needs. So it really needs to be a coordinated effort if we’re actually going to change things for the patient instead of just fixing whatever physical symptom they present with.”

HSNewsBeat will check in with UW's hotspotters when the team is ready to share its findings.