Students from around the world pitch solutions to poverty issues

Students from around the world pitch solutions to poverty issues 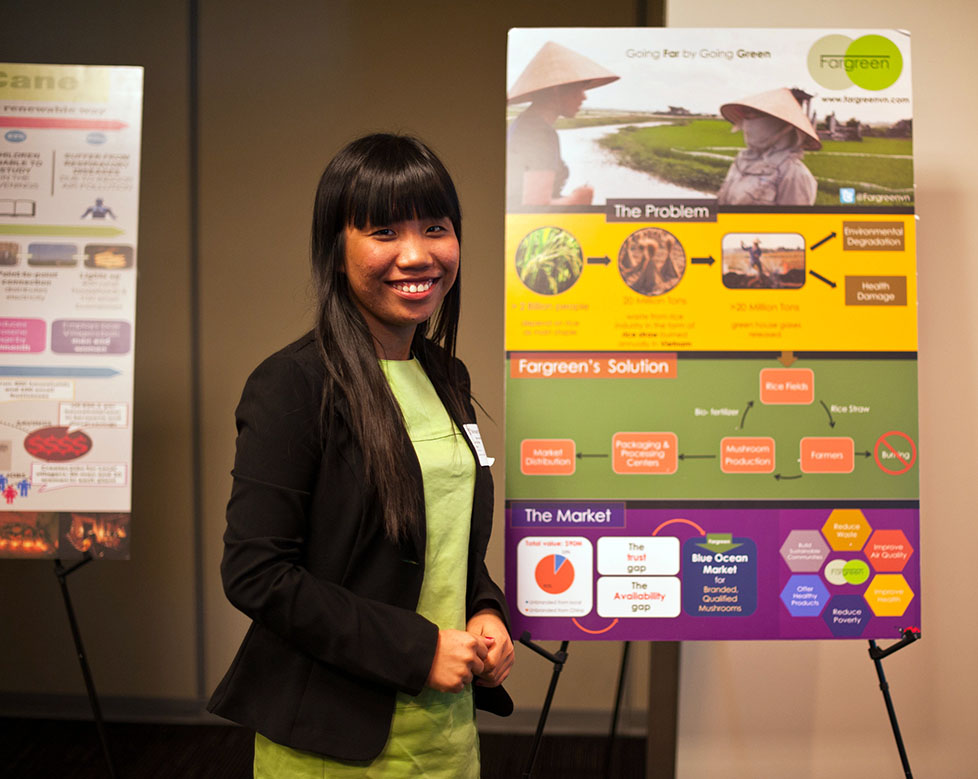 When you ask business students from around the world for their ideas to alleviate poverty, you unleash capitalism with passion.

Teams from the United States, Bangladesh and The Philippines won $40,000 in this year’s Global Social Entrepreneurship Competition (GSEC) sponsored by the UW Foster School of Business.

Fargreen, a team from Colorado State University, won the grand prize of $12,500 for a plan for converting rice straw waste in Vietnam into a product that can be used to cultivate mushrooms, and the byproduct into fertilizer.

Trang Tran, CEO and founder of Fargreen, dedicated the award to her mother who lives in Vietnam and just had a birthday. “It was hard for my mother to understand why I needed to come to the United States to get my MBA to do something my parents have been doing for years,” she said at the awards ceremony Feb. 27.

Tran said Vietnam burns about 20 million tons of rice straw a year. Although mushrooms are popular, most consumers in Vietnam get them as Chinese imports.

“Help Vietnam go far by going green,” Tran told the crowd in a ballroom at the Grand Hyatt in downtown Seattle. The Global Social Entrepreneurship Competition is in its 10th year, and  support is only growing.“We need the kind of entrepreneurism that sits in this room,” Liz Clyma, the program chief development officer at The Bill & Melinda Gates Foundation, said at the awards ceremony.

The Gates Foundation, Seattle and University Rotary, Microsoft, Seattle International Foundation, UW Global Business Center and the Department of Global Health collectively contribute roughly $40,000 in prize money each year. The result? A pipeline of entrepreneurs committed to making the world a better place.

Kirsten Aoyoma, director of UW’s Global Business Center, said nearly 30 percent of semifinalist teams responding to a survey have launched the venture they pitched at Global Social Entrepreneurship Competition. Of those, 86 percent are still in business and 92 percent stayed together as a team.

“The Global Social Entrepreneurship Competition provides a safe and supportive platform for students to experiment and fail. The experience contributes to their future success as real-world entrepreneurs,” she said.

This year, 160 teams from 35 countries entered the competition; 19 teams were chosen to fly out to Seattle for a week of coaching and pitching their ideas. Six teams were finalists. They gave their final pitches before a team of four judges – a friendlier version of Shark Tank.

The second place prize of $10,000 went to Bhitti, a team from the University of Dhaka in Bangladesh. Their plan is to use sugar cane fibers to make bricks and cement that are durable and affordable.

Tara Brown
An all-women team from the Philippines won the Global Health prize of $10,000 for ready-to-eat bars for use in a disaster like Super Typhoon Haiyan.
picture of the Ayuda bars

The global health prize of $10,000 and the $2,500 Rotary prize went to Ayuda Food Aid, a team from Ataneo de Manila University in the Philippines. Their idea is to make ready-to-eat bars for use in a disaster like Super Taiphoon Haiyan. The all-women team noted that in disasters, food aid is typically slow. There is a desperate need to have food locally sourced and stored.  They would provide the bars to NGOS.

“Help us help you help others,” they said in their pitch.

The Investor’s Choice Award, a non-monetary recognition from trade show judges, went  to Gunawave, a UW team that is offering  training and  infrastructure for  technological  jobs for poor women in Mexico. The training includes skill development and English instruction.

He said the secret to success is not in the numbers.

Tran told the Foster School of Business she plans to use the prize money to build their first mushroom facilities for ten farmers who signed up to be part of their network.
“The construction and production will happen this summer,” she said.

For videos and photos of the winners, see the Global Social Entrepreneurship Competition page.  Also read the write-up in Humanosphere here.