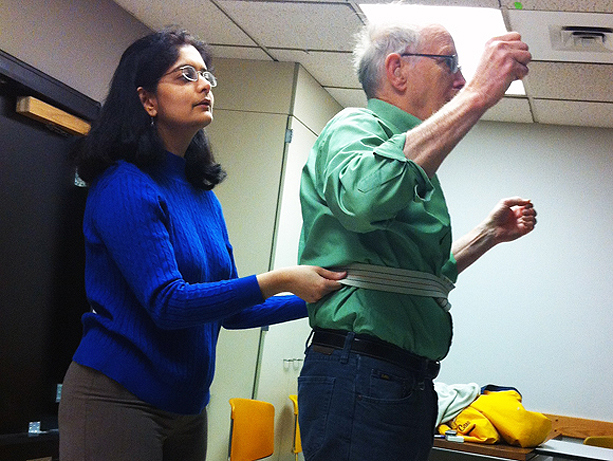 “In the past, people have used diaries to track activity, and people tend to overestimate their physical activity,” said Dr. Sujata Pradhan, an assistant professor of rehabilitation medicine, who is leading the study.

Designed for runners, Sensoria socks are embedded with thin pressure sensors that transmit information about cadence, foot-landing and pressure. Pradhan thinks the sensors will pick up subtle changes in patients’ gait not evident to the human eye – data that could help her create assessments that identify disease symptoms at an earlier stage.

“People are usually referred for rehabilitation only when they have difficulty maintaining their balance or start falling,” Pradhan said. “Usually overt clinical deficits in balance and walking appear later in disease progression. If we bring more awareness to these subtle early symptoms, people will start referring to physical therapy earlier.”

Every year, 50,000 people in the U.S. are diagnosed with Parkinson’s disease, a neurological disorder that causes tremors, slurred speech and limited mobility. The stark reality of the disease leaves many feeling out of control, unable to slow or stop the progression of the disease.

Data from the 30 study participants with Parkinson’s will be contrasted against that of 30 gender- and age-matched adults without Parkinson’s. Both groups will wear the technologies for two weeks.

The Fitbits will help Pradhan discern whether people with Parkinson’s are as active as the other group, and if their level of activity aligns at all with their disease severity and progression.

“We know that if you want to slow the progression of the disease, your exercise and intensity of physical activity levels have to be much higher than what you would normally do,” she explained. “If the recommendation for healthy, active adults is 10,000 steps per day, is that enough to translate into beneficial effects on function and disease status for people with Parkinson’s? We really do not know. Our aim is to first find out how active people with Parkinson’s actually are.”

Pradhan’s goal is to develop physical-activity recommendations in the fall of 2016.

Pradhan’s study is supported by the Rising Stars program in UW's Institute of Translational Health Sciences, which provides early-stage investigators with career development support and $15,000 for research funding.