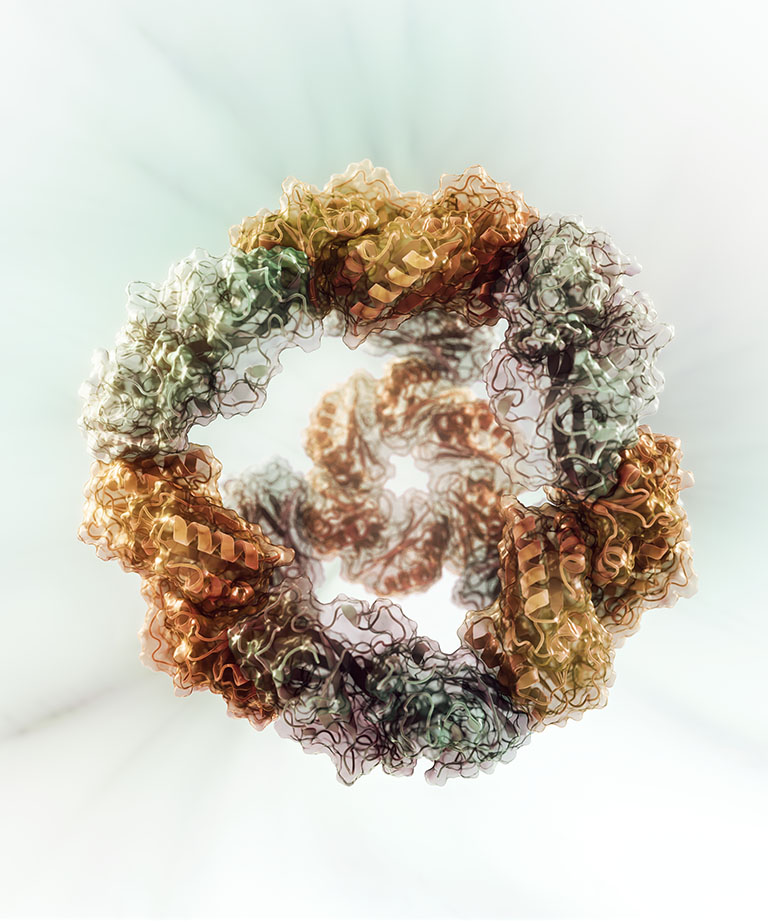 A route for constructing protein nanomachines engineered for specific applications may be closer to reality.

Scientists inspired by these sophisticated molecular machines want to build their own, with forms and functions customized to tackle modern-day challenges.  The ability to design new protein nanostructures could have useful implications in targeted delivery of drugs, in vaccine development and in plasmonics, which is manipulating electromagnetic signals to guide light diffraction for information technologies, energy production or other uses.

A recently developed computational method may be an important step toward that goal.  The project was led by the University of Washington’s Neil King, translational investigator;  Jacob Bale, graduate student in Molecular and Cellular Biology; and William Sheffler in David Baker’s laboratory at the University of Washington Institute for Protein Design, in collaboration with colleagues at UCLA and Janelia Farm.

The work is based in the Rosetta macromolecular modeling package developed by Baker and his colleagues.  The program was originally created to predict natural protein structures from amino acid sequences.  Researchers in the Baker lab and around the world are increasingly using Rosetta to design new protein structures and sequences aimed at solving real-world problems.

“Proteins are amazing structures that can do remarkable things,” King said, “they can respond to changes in their environment.  Exposure to a particular metabolite or a rise in temperature, for example, can trigger an alteration in a particular protein’s shape and function. ” People often call proteins the building blocks of life.

“But unlike, say, a PVC pipe," King said, "they are not simply construction material.”  They are also construction (and demolition) workers -- speeding up chemical reactions, breaking down food, carrying messages, interacting with each other, and performing countless other duties vital to life.

Reporting in the June 5 issue of Nature, the researchers describe the development and application of new Rosetta software enabling the design of novel protein nanomaterials composed of multiple copies of distinct protein subunits, which arrange themselves into higher order, symmetrical architectures.

With the new software the scientists were able to create five novel, 24-subunit cage-like protein nanomaterials.  Importantly, the actual structures, the researchers observed, were in very close agreement with their computer modeling.

Their method depends on encoding pairs of protein amino acid sequences with the information needed to direct molecular assembly through protein-protein interfaces.  The interfaces not only provide the energetic forces that drive the assembly process, they also precisely orient the pairs of protein building blocks with the geometry required to yield the desired cage-like symmetric architectures.

Creating this cage-shaped protein, the scientists said, may be a first step towards building nanoscale containers.  King said he looks forward to a time when cancer-drug molecules will be packaged inside of the designed nanocages and delivered directly to tumor cells, sparing healthy cells.

“The problem today with cancer chemotherapy is that it hits every cell and makes the patient feel sick,” King said.  Packaging the drugs inside customized nanovehicles with parking options restricted to cancer sites might circumvent the side effects.

The scientists note that combining just two types of symmetry elements, as in this study, can in theory give rise to a range of symmetrical shapes, such as cubic point groups, helices, layers, and crystals.

King explained that the immune system responds to repetitive, symmetric patterns, such as those on the surface of a virus or disease bacteria.  Building nano-decoys may be a way train the immune system to attack certain types of pathogens.

“This concept may become the foundation for vaccines based on engineered nanomaterials,” King said.  Further down the road, he and Bale anticipate that these design methods might also be useful for developing new clean energy technologies.

The scientists added in their report, “The precise control over interface geometry offered by our method enables the design of two-component protein nanomaterials with diverse nanoscale features, such as surfaces, pores, and internal volumes, with high accuracy.” They went on to say that the combinations possible with two-component materials greatly expand the number and variety of potential nanomaterials that could be designed.  It may be possible to produce nanomaterials in a variety of sizes, shapes and arrangements, and also move on to construct increasingly more complex materials from more than two components.

The researchers emphasized that the long-term goal of such structures is not to be static. The hope is that they will mimic or go beyond the dynamic performance of naturally occurring protein assemblies, and that eventually novel molecular protein machines could be manufactured with programmable functions.

The researchers pointed out that although designing proteins and protein-based nanomaterials is very challenging due to the relative complexity of protein structures and interactions, there are now more than a handful of laboratories around the world making major strides in this field.  Each of the leading contributors has key strengths, they said.  The strengths of the UW team is in the accuracy of the match of the designed proteins to the computational models and the predictability of the results.

This project was supported with funding from the Howard Hughes Medical Institute, the U.S. Defense Threat Reduction Agency, the National Science Foundation, the International Vaccine Initiative, the U.S. Air Force Office of Scientific Research, and the U.S. Department of Energy.