Some humans in urban Bangladesh are infected with multiple strains of simian foamy virus, a UW-assisted team reported.
Bobbi Nodell
11/19/2013 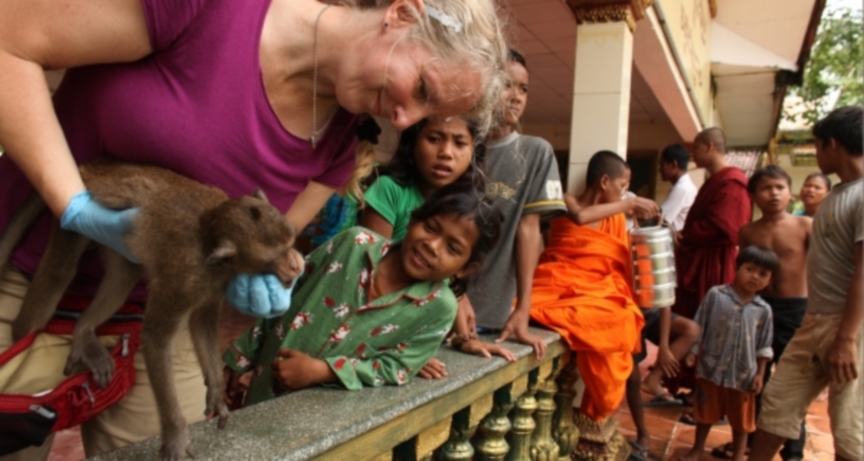 Primatologists like Lisa Jones-Engel at the UW National Primate Research Center can only speculate about why HIV became a human-to-human virus, but they want to prevent another such devastating epidemic.

She and colleagues are focusing their research in Asia, where humans and monkeys live side-by-side in many urban areas.

In a recent study in Bangladesh, one of the world’s most densely populated areas, researchers collected biological samples from hundreds of people and macaques in five urban sites, as well as from a group of nomadic people who travel throughout the country with their performing monkeys.

The scientists found that some people in these urban areas are concurrently infected with multiple strains of simian foamy virus (SFV), including recombinant strains that were originally detected in the monkeys.

“The big question is when the next primate disease will emerge into the human population,” said Jones-Engel, a UW Medicine research scientist.

A team from the University of Washington, Fred Hutchinson Cancer Research Center and Jahangirnagar University reported the study results in September in the journal Emerging Microbes & Infections.

The scientists characterized the simian retroviral strains being transmitted between species, and provided a glimpse into the behaviors of humans and monkeys contributing to the infections.

They focused on Asia because that continent has witnessed the emergence of several infectious diseases in the past decade. Asia also has a volatile combination of a population that is increasingly mobile and with a compromised immune response living in proximity with animals.

Lynn Johnson
In the study, researchers collected biological samples from a group of nomadic people who travel throughout Bangladesh with their performing monkeys.
Macaques monkeys

“HIV and ebola came out of Africa, but Africa doesn’t have the mixing of primate species and the intense human-primate interface that we see in Asia,” Jones-Engel said.

Transmission of SFV between species occurred most commonly through bites, the researchers found. The virus replicates in oral tissues and is secreted in the saliva of infected primates. More than half of the study subjects reported having been bitten at least once by a rhesus macaque. Researchers also found that primates, both human and nonhuman, can be infected with more than one strain of simian foamy virus – significant because co-infection can lead to viral recombination.

Maxine Linial, a retrovirologist at the Hutch, said that successful viruses are readily transmitted and that viruses evolve to be successful. Simian foamy virus is not known to cause disease, but that was also the case with simian immunodeficiency virus before recombination and mutation allowed infection of, and transmission between, new hosts, Linial said.

“The possibility that a pathogenic SFV strain could arise makes it essential to monitor natural infections. If a viral strain with pathogenic potential arises, we will know about it early rather than too late, which was the situation with the emergence of HIV,” she said.

The researchers were able to differentiate the viruses by observing that strains showed a strong geographic signal; that is, monkeys had variants characteristic of specific areas. However, deforestation and human transport of monkeys concentrated the strains and then moved them.

The data show a population in transition, said Frederick Matsen, a computational biologist at the Hutch. “If we were to sample 25 years earlier or 25 years later we would have seen a completely different story,” he said.

If researchers had been on the ground 50 years ago, Jones-Engel suggested, they might have seen how simian immunodeficiency viruses crossed the species barrier, resulting in HIV.
“We have been playing catch up with the SIV-HIV question for years,” she said. “We still don’t know why only some viral strains are capable of establishing persistent infections in humans.”

Long-term surveillance is needed in the areas where humans and primates come into contact, Jones-Engel said, since it’s unlikely that SIV-HIV will be the last primate virus to emerge into the human population.