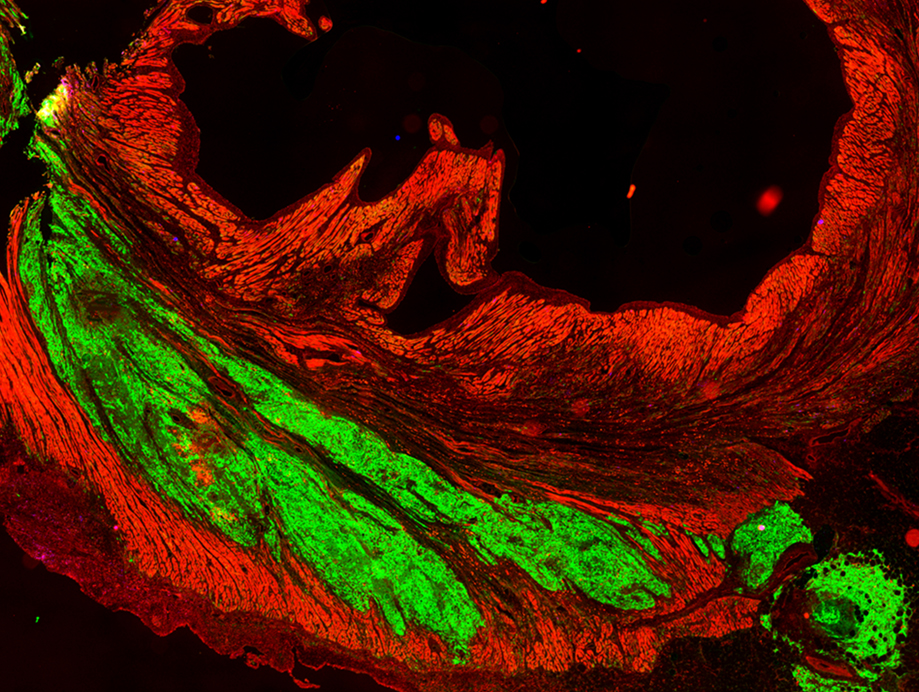 The results of the experiment appear in the April 30 advanced online edition of the journal Nature.

The findings suggest that the approach should be feasible in humans, the researchers said.

“Before this study, it was not known if it is possible to produce sufficient numbers of these cells and successfully use them to remuscularize damaged hearts in a large animal whose heart size and physiology is similar to that of the human heart,” said Dr. Charles Murry, UW professor of pathology, bioengineering and medicine, Division of Cardiology, who led the research team that conducted the experiment.  A physician/scientist, Murry directs the UW Center for Cardiovascular Biology and is a UW Medicine pathologist. He holds the UW Arra and Eva Woods Endowed Professorship.

Murry said he expected the approach will be ready for clinical trials in humans within four years.

In the study, Murry, along with Dr. Michael Laflamme and other colleagues at the UW Institute for Stem Cell & Regenerative Medicine, experimentally induced controlled myocardial infarctions, a form of heart attack, in anesthetized pigtail macaques.

The infarcts were created by blocking the coronary artery of macaque for 90 minutes, an established model for the study of myocardial infarction in primates.

In humans, myocardial infarctions are typically caused by coronary artery disease. The resulting lack of adequate blood flow can damage heart muscle and other tissues by depriving them of oxygen. Because the infarcted heart muscle does not grow back, myocardial infarction leaves the heart less able to pump blood and often leads to heart failure, a leading cause of cardiovascular death.

The goal of stem cell therapy is to replace the damaged tissue with new heart cells and restore the failing heart to normal function.

All the monkeys had been put on immunosuppressive therapy to prevent rejection of the transplanted human cells.

The results show we can now produce the number of cells needed for human therapy and get formation of new heart muscle on a scale that is relevant to improving the function of the human heart,” Laflamme said.

Ultrasound studies of the macaques’ hearts showed that the ejection fraction, an indication of the hearts ability to pump blood, improved in some of the treated animals but not all. The researchers also found that arteries and veins from the macaques’ hearts grew into the new heart tissue, the first time it has been shown that blood vessels from a host animal will grow into and nurture a large stem-cell derived graft of this type.

The most concerning complications were episodes of irregular heartbeats, or arrhythmias, that occurred in the weeks after the macaques received the stem cell injections, Murry said. None of the macaques, however, appeared to have symptoms during these episodes, which disappeared after two to three weeks as the stem cells matured and became more electrically stable.

Going forward the UW researchers will work to reduce the risk of arrhythmias, perhaps by using more electrically mature stem cells. They also will try to demonstrate definitively that the stem cells are actually strengthening the heart’s pumping power.

These cells have improved the mechanical function in every other species in which they have been tested, so we are optimistic they will do so in this model as well,” Murry said.