To run again: Woman recaptures her bliss after brain surgery

To run again: Woman recaptures her bliss after brain surgery 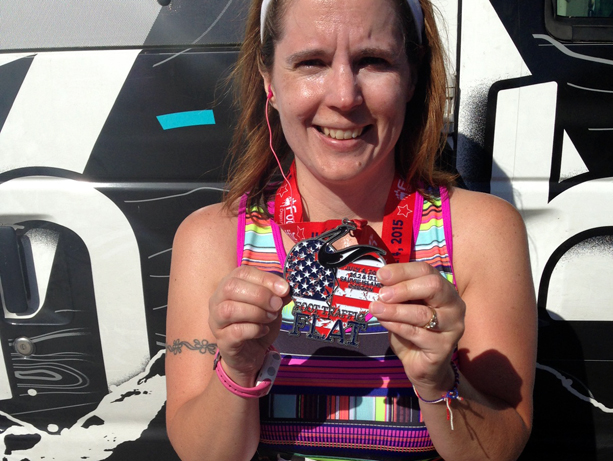 In 2001 and out of the blue, Kristina Teel, a wife and mother, started having odd health symptoms.

“If I coughed or got up too fast, I would get severe pain in the back of my head, which would spread all over,” she said. “The pain would last for a few seconds and things would go black. I thought, ‘This isn’t right.’ ”

Teel, now 41, was suffering from a malady which affects about one in 1,000 people and which few people have heard of: a Chiari malformation (pronounced "kee-ar-ee" and named for Austrian pathologist Hans Chiari).

Part of her brain extended below the opening to the spinal canal, blocking the flow of cerebrospinal fluid. Four variations of the malformation cause dizziness, headaches, and vision and balance problems, among other symptoms.

She consulted a doctor and underwent surgery in Vancouver, Wash., her hometown. It seemed to solve her problems until last year, when symptoms re-emerged, with more severity. She needed surgery again, her neurologist said, directing her this time to Dr. Rich Ellenbogen, chair of neurological surgery at UW Medicine.

“These are complex problems. Kristina experienced a known complication after this type of surgery,” said Ellenbogen, who performs two or three Chiari corrective surgeries every week.

In August 2014, Ellenbogen and a team at Harborview Medical Center expanded the back of Teel’s skull and inserted a titanium mesh box to lift her brain and permanently prevent it from slumping into her spinal cord.

Recovery was not easy. One of Teel’s many medications made her feel sad. Sharp pains in her head continued for a while. Her insurer initially balked at covering the procedure.

Teel persisted. Between the first and second surgeries she had become a competitive runner, and yearned to recapture her stride.  “I made sure I’d get up and walk every day,” she said. By December, she was lacing up running shoes again.

“I ran half a mile just to see if I could do it. I thought I was going to die,” she said, laughing.

This past July, she completed a half-marathon, full of emotion.

“You have 13.1 miles to think about a bunch of stuff: I was thinking about where I’d been physically at that time a year prior, about Doctor Ellenbogen and how he gave me my life back. When I crossed the finish line, my husband was there and I just started crying,” Teel said.

In August she walked the 129-mile Portland to Coast relay.

“It puts a smile on my face. Doctors, we live to save lives and decrease disability, to get people back to doing what they want to do. It doesn’t always happen, but when it does, it reminds us why we do this,” he said, adding, “Anybody who’s doing half-marathons is doing better than I am.”

Teel is lucky, too, Ellenbogen said.  He typically would expect a 50 percent reduction of symptoms post-surgery; Teel reports about an 85 percent improvement. Certain postures still cause minor dizziness, but it’s a far cry from her once-debilitating symptoms.

Her message to people who may be going through something similar: “Don’t give up. If something’s not right, don’t let someone just dismiss it. Be a fighter.”