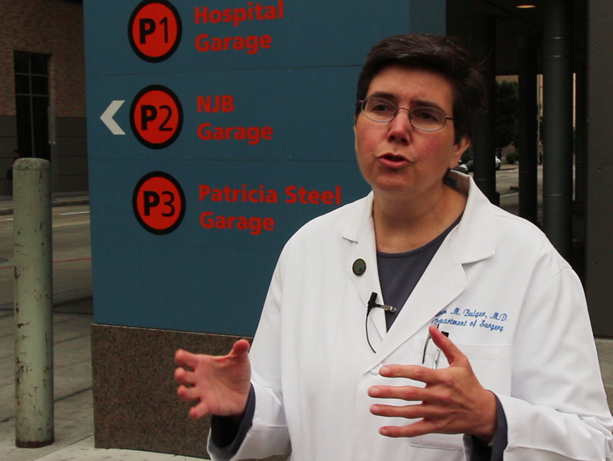 Harborview Medical Center is one of 10 trauma centers in the United States and Canada that aim to participate in a study of a therapeutic drug on people suspected of having sustained a traumatic brain injury. The study differs from nearly all medical research in that it has received federal approval to proceed without getting consent from study subjects prior to the initiation of the treatment.

Eileen Bulger, chief of trauma at Harborview Medical Center, discussed the study and the rationale for exemption.

Q. What’s the goal or value of this study?

A. We think we have a new therapy that can benefit patients with traumatic brain injury. It hasn’t been widely tested in that population but it has been used in other situations with traumatic bleeding and it’s been shown to be very safe. We think it has the potential to directly benefit patients who have bleeding around the brain, and would like to try it and see if we can find a way to improve their outcome in the long-term.

Q. How might tranexamic acid help people with suspected TBI?

A. Bleeding inside the skull is dangerous for you because it puts pressure on the brain and damages the brain, and it can be life-threatening. Tranexamic acid is a drug that affects blood clotting. When you make clot from bleeding, it’s normally broken down by the body, and that process is accelerated in circumstances where you have trauma. So this will prevent that clot from being broken down, and could reduce the progression of bleeding around the brain. If we can reduce the spread of that bleeding, we think we can improve outcomes.

Q. This study doesn’t guarantee that an unconscious person is going to receive tranexamic acid from first responders, right?

A. That’s right. You have to meet specific criteria that you have signs of a head injury, that you have a certain level of consciousness. You are assessed by the paramedics, who decide based on those criteria if you’re a candidate for the study. Two-thirds of the patients in the study will get tranexamic acid, and one-third will get a placebo or a control saline solution that they would normally get.

Q. What is so important about traumatic brain injury that researchers would forgo the informed-consent standard for subjects’ participation in medical research?

A. Traumatic brain injury is actually the leading cause of death after trauma. So for people between the ages of 1 and 44, that’s what kills more people than anything else. In addition, it’s not just survival; it’s the issue of long-term disability from traumatic brain injury. People are often disabled for life and unable to return to work or school.

There haven’t been good new treatments for traumatic brain injury in many years, and we really need to try to find better ways to improve outcomes in this devastating public health problem.

Q. Can you address the study’s most sensitive aspect? What’s the rationale for bypassing the standard that typically requires study subjects to give informed consent?

A. Almost all medical research and clinical trials are done under informed-consent regulations, where you have the time to sit down with a person, go over the study, explain the risks and benefits and let them decide if they want to participate.

This circumstance is unique in that the patients that we need to study, that we need to know whether it will help, are unconscious at the time that they need the intervention. So there are very strict federal guidelines for what’s called Exception from Informed Consent Research in an Emergency Setting: You have to have an intervention that has proven to be safe, that has the potential to directly benefit the people involved in the study, and it has to be in a life-threatening circumstance where there aren’t other good therapies. If the intervention meets these criteria then you have to consult with the community where the research will take place to get their support for the study.

This drug [tranexamic acid], from a scientific standpoint, meets all those requirements. What we’re doing now is reaching out to the community to tell them about the study, to get their feedback and understand whether the community of Seattle-King County would be supportive of participating in this trial.

Q. Is it fair to say that existing standards of care in emergency response have had to go through this same regimen of testing?

A. In fact, a lot of what we do in emergency care has not been well tested, and when we test it we sometimes find that what we’ve been doing is wrong. So it’s really important for us to make advances to study in a rigorous way.

Q. In 2007 you were involved in a similar study of unconscious patients who could not give consent. How did that study end and what did you learn from it?

A. That study was involving a hypertonic solution, again for brain-injured patients, that we thought might improve outcome. It didn’t make any difference in outcome. People have been studying it for over 20 years in the laboratory, and we’ve abandoned that line of research as a result. We learned a lot about how to do this research, how to reach out to the community to get broad input.

I will tell you that, uniformly, the people that were involved in that study gave us feedback that they appreciated being enrolled in the study. It was a tremendous opportunity for us to learn how to do this type of research well.

Anyone can choose not to participate in the study.
Information about how to opt out of this study

Q. When people are advised that they have been made part of a study without their knowledge, how do they respond?

A. Following admission to the hospital, we approach the patient or their family to tell them that they’ve been involved in the study. We seek their permission to remain in the study so we can follow them while they are in the hospital and contact them again in six months and see how their neurologic function is doing. In general, the vast majority of people are very appreciative of having been involved in the study; they want everything possible done for them that could potentially improve their outcome. We have not had negative feedback from people that have actually been enrolled in the study.

Q. What happens if researchers note that tranexamic acid has a negative effect on patients? How quickly would the test be halted?

A. Patients are very closely monitored for any potential side effects. Again, we wouldn’t be able to do the study if we didn’t have a good safety profile for the drug. But being part of a research study means you’re actually more closely monitored for any adverse effects than you would otherwise be. We have a very tight monitoring program. If anything is detected that is unusual or concerning, it’s reported right away. There’s a data-safety monitoring board that oversees the trial, along with the FDA, who’s approved and is overseeing the trial, and if they get any signal that there’s a concern, the trial would be halted immediately.

Q. How long will the study last, and how will participating hospitals measure success?

A. The study will last about a year from the time we begin enrollment. It’s being done at 10 centers around the U.S. and Canada. The primary outcome we’re looking at is the person’s neurologic function six months after injury. It’s not good enough to say more people survived (a traumatic brain injury) because if you survive, but you have very poor neurologic function, we haven’t done any good. We want to know, six months after your injury, are you able to go back to work? Are you functional? How much care do you need? All those things go into whether this is a successful therapy for us.

Q. How can people opt out if they don’t want to participate?

A. We have a system to allow people to opt out who feel strongly about not wanting to participate in this type of research. It’s a medic alert bracelet; you contact us and we’ll send it to you in the mail. Just wear it during the period of the study. It tells the paramedics, who are used to looking for medic alert bracelets, that this person doesn’t want to participate in the study. That’s the most important thing: It’s hard for the paramedics to otherwise know your wishes because you’re unconscious.