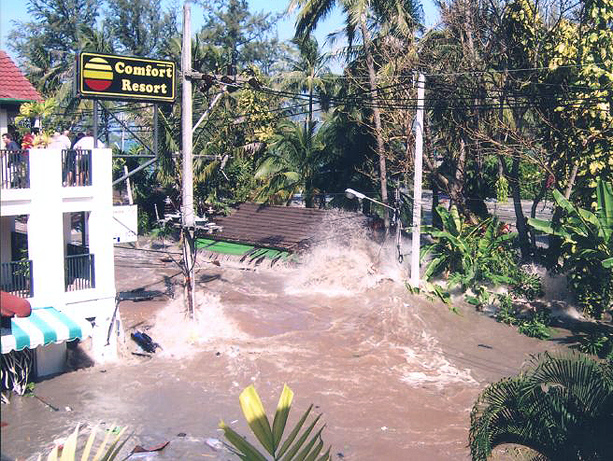 Mark Oberle, his wife and son, then 14, arrived on the Thai island of Phuket late on Christmas Day, 2004. By the time they checked in at their hotel and plopped down their bags, it was nearly midnight. They decided they'd sleep in the next morning.

But at about 8 a.m. their beds began to shake for two to three minutes. About 20 minutes later, the shaking recurred.

Oberle, now a University of Washington professor emeritus of health services, assumed these were small, local quakes. The possibility of a tsunami never crossed his mind, he says.

About two hours later, after a leisurely breakfast in an open-air restaurant beside the hotel lobby, the Oberles were heading upstairs to change for the beach when they heard a commotion below. People were running into the lobby, shouting in Thai. A second later, there as sound like an explosion and Oberle saw a black mass of water sweeping by the nearby hotel.

“I thought it was a sewer line breaking,” Oberle wrote in an account he later posted online. “Mardie thought it was a dam failure, and many others thought it was a terrorist attack.” More explosions followed, like distant cannon fire. Oberle later realized that these were sounds of the tsunami’s first massive wave slamming into the beachfront hotels, cafes and restaurants as the swell swept up at different points the beach north of his hotel.

"I saw a swell of floodwater heading our way, perhaps just a 3- to 4-foot deep plateau of water with a roiling mass of water and debris at the leading edge. Then I finally realized it was a tsunami.”

Mark Oberle
"I treated two victims on the top floor of the white hotel building. Then hopped from the second floor balcony onto the tilted, brown pickup truck to get to another victim in the brown hotel," wrote Mark Oberle.
picture of auto wreckage stacked near hotels in Phuket on Dec. 26, 2004

The Boxing Day tsunami that swept across the Indian Ocean on Dec. 26, 2004, killed more 225,000 people. Indonesia, Sri Lanka, India, the Maldives and Thailand were all hard hit. The waves were triggered by magnitude 9.1 undersea earthquake off the northern coast of Sumatra. The highest reported waves reached 30 feet as they came ashore.

The Oberles’ hotel was set well back from the shoreline, behind two others that bore the brunt of the series of waves. Nevertheless, water, mud and debris flooded around the hotel and into its courtyard.

Over the next several hours, Oberle, wearing flip-flop sandals, scrambled over rubble and through the debris-choked water, moving from building to building to tend to dozens of injured people. Many had fractures and deep lacerations; others were in shock, dehydrated or had inhaled the seawater slurry. So many needed help that he began assessing each victim as quickly as he could, instructing whomever was at hand on how to clean and bind up the person’s wounds, and then moving on to the next victim.

Mark Oberle
In Phuket, buses and boats blocked streets and pulled down power lines.
picture of turned-over cars and downed power lines in Phuket on Dec. 26, 2004

The hours wore on, and Oberle was surprised that no help had arrived.

“I had assumed this was local tsunami and that ambulances would soon be there. It was only three or four hours after the first wave, when someone received a text message from friends in Scandinavia, that we learned what the rest of the world knew: that this was a major regional event.”

Because of the rubble, when the ambulances did arrive they could not reach the beach hotels. Oberle organized an evacuation party, which carried out the injured, using poolside lounge chairs as stretchers.

“The lesson was that you need to be prepared for the local hazards wherever you go,” Oberle says. “You may live in Eastern Washington, but if you vacation at Ocean Shores, you need to know what to do if there’s a tsunami.”

“First, when you feel the earth shake you should immediately move to higher ground unless you’re told by appropriate authorities that it is not necessary,” he says. “Make an evacuation plan with your family or traveling companions and practice it so everyone will know what to do. And put together an emergency kit that includes water, food, first-aid and other emergency supplies.”

“Finally, learn first aid.” Oberle says. “Because I was a physician I was able to triage people quickly to determine who needed immediate care and who could be taken care of by their family and friends, but most of what I did was give first aid that I learned in Boy Scouts, cleaning and bandaging lacerations and splinting fractures. So take a course in first aid.

"Remember, in a disaster it may take hours or even days for help to arrive, and, in that case, you are the first responder.”