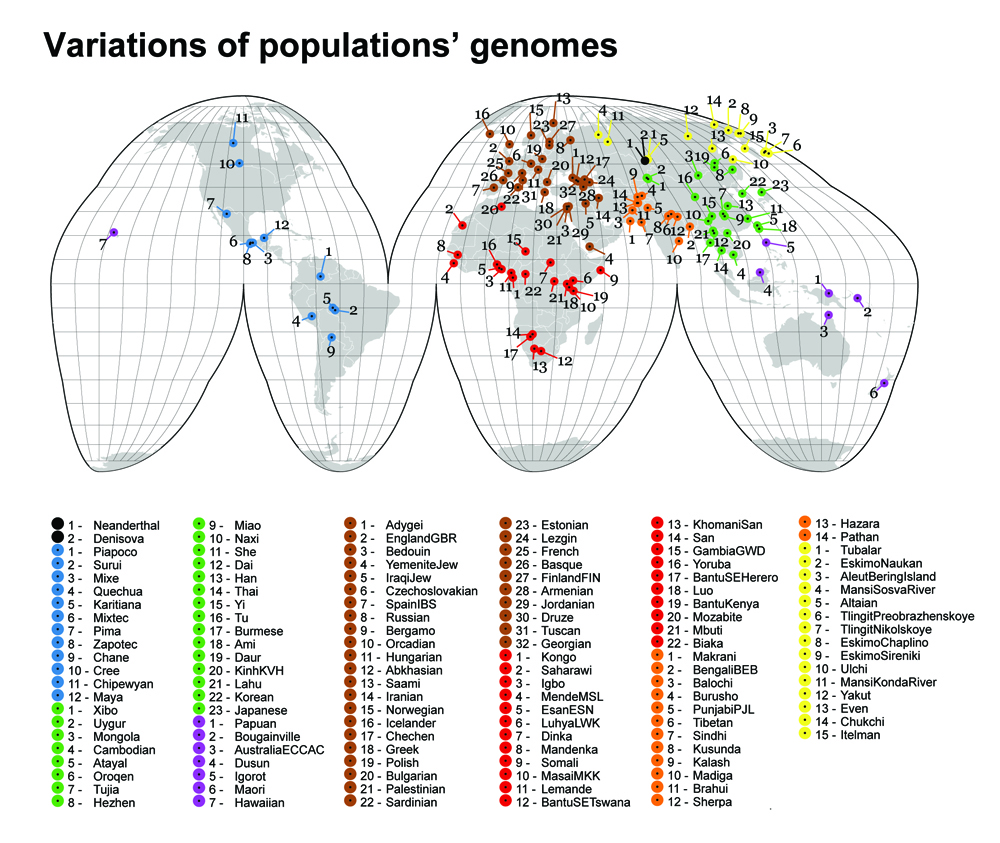 An international team of researchers led by University of Washington scientists have found that the gain or loss of blocks of genetic code, called copy number variants (CNV), contributed far more to the genetic variation seen among human populations than the differences seen in studies of mutations involving a single nucleotide, called single nucleotide variants. The paper was published today by the journal Science.

The results should provide a better understanding of human evolution, migration and diversity and yield insights to why some populations are more susceptible or resistant to diseases, said principal investigator Evan Eichler, UW professor of genome sciences and an investigator at the Howard Hughes Medical Institute.

Previous studies have compared genetic differences among humans from specific regions. The new analysis examines the complete genomes of individuals from a much wider variety of modern humans, and in far greater detail, than ever before.

The CNVs that the researchers focused on are mutations created when DNA segments are duplicated or deleted. This primarily occurs during meiosis, the process of cell division leading to the creation of eggs or sperm, and so these changes are passed to subsequent generations.

By sequencing the genomes in such detail, the researchers were able to detect CNVs as small as 1,000 base pairs. Using this approach, the researchers compared the genomes of 236 individuals from 125 human populations, as well as the genomes of three ancient humans and two related but nonhuman species, Neanderthals and Denisovans, a Neanderthal-like species first found in Siberia. With these data they also reconstructed a prospective ‘ancestral’ genome of the earliest human.

“To study genomes from so many different populations in such detail is unprecedented and exciting,” said lead author Peter Sudmant, a UW graduate student in genome sciences.

The researchers identified more than 14,000 CNVs among the genomes studied, and found that 7% of the human genome varies due to CNVs in contrast to just 1% due to single-nucleotide variants seen in earlier studies.

The research creates a guide "of genetic variations that have been important for humans as they have migrated across the globe," said author Evan Eichler.
picture of Evan Eichler

African populations were more likely to have retained sequences from the ancestral human genome, and their genomes were broadly distinguishable from non-African populations—
that is, West Eurasian, East Asian and Oceanic populations. These populations, in turn, were stratified into distinguishable clusters composed of North African, Siberian, South Asian, Amerindian and indigenous peoples of the Philippines and North Borneo. The Neanderthal genome and that of the Neanderthal-like Denisova were distinct from all humans.

The researchers found that the genetic differences that have appeared between different human populations were primarily driven by CNVs that involve duplication. Extra copies of genes can mutate and give an individual a trait that would help them better meet environmental challenges. Gene deletions, on the other hand, are more likely to be deleterious by creating a loss of function.

Intriguingly, some Oceanic populations appear to have acquired duplications that first appeared in the genome of the now-extinct Denisova. In fact, 80% of individuals from one of these populations, the Papuan-Bougainville, have a large Denisovan duplication that is 225,000 base pairs long and not found in any other human population. This duplication must have been acquired about 40,000 years ago, when humans and the Denisova peoples interbred, the researchers said.

Several differences found between populations have medical implications, the researchers suggested. For example, duplications of genes coding for haptoglobin and a related protein were found only in African populations, some of which had as many as six copies of the genes. These proteins bind to hemoglobin released in the plasma from damaged red blood cells and may protect against human African trypanosomiasis, the parasitic disease known as “sleeping sickness.”

“What this study does is create an atlas of genetic variations that have been important for humans as they have migrated across the globe and have had to adapt to new enviromental challenges. Researchers can now go and use this atlas as a road map to identify areas where genes that are important in both health and disease are likely to be found,” Eichler said.

Funding for this study came from the U.S. National Institutes of Health (2R01HG002385), the Howard Hughes Medical Institute and other organizations in the United States and abroad.