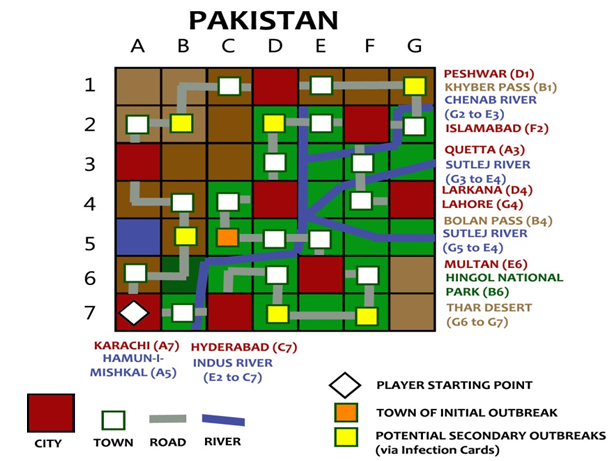 An interactive “Polio Eradication Game,” played on a carpeted grid like a life-size chess board, may increase public interest in global health, according to a new study from the University of Washington School of Public Health and collaborators.

Researchers led by former MPH student Toluwalose Okitika, set up the game at a free global health fair in Seattle during the summer of 2012. It featured different-colored squares to represent geographic features of Pakistan, one of three nations where polio remains endemic. Four players – portraying a researcher, transportation expert, local community coordinator and healthcare worker – each had distinct responsibilities but had to work together on using available resources. They drew cards from different decks and faced various challenges, including getting vaccines to the epicenter of an outbreak or lack of ice to keep them cold.

At the end of each game, players and observers were surveyed and their responses compared with a random sample of visitors to other parts of the exhibit. Overall, researchers found that 77 percent of game participants reported they were more interested in global health after playing or watching the game.

Participants also gained insights. “I didn’t realize how close polio is to eradication,” one 15-year-old told researchers. An 18-year-old student participant said, “The activity and the entire exhibit make it more realistic and closer to me than previously.”

Hands-on, interactive games can raise awareness and change public attitudes toward health issues, the researchers reported. “They may be particularly useful in engaging youths in global health activities and global citizenship,” they wrote. The study was published in Games for Health Journal.

Okitika, of Nigeria, was working as an intern for the Department of Global Health and later earned a master's focused on environmental and occupational health sciences. The senior author was Judith Wasserheit, UW chair of global health. Study collaborators included the UW School of Medicine, UW Department of Biostatistics, Emory University and game developers from Harebrained Schemes, Digipen Institute of Technology, and the University of Southern California.