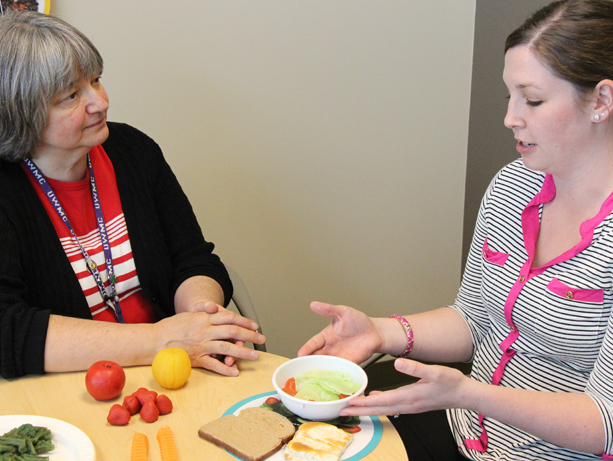 Fatigue was less and quality of life improved for people with multiple sclerosis who adopted a yearlong, plant-based diet low in saturated fat, according to recently presented research.

The unpublished findings from Oregon Health & Science University were shared at a neurology conference in early May. The study comprised just 49 people, a small sample, but its results are so encouraging that people with the condition may be motivated to try it, said Anne Linge, a registered dietitian who consults patients at UW Medicine’s Multiple Sclerosis Center.

“Quality of life is huge with people who have MS because fatigue is so debilitating. People who try this diet might experience diminished symptoms,” she said.

The Oregon study used the “McDougall Diet,” which allows starches, fruits and vegetables, excludes meat, fish and dairy, and is otherwise very low in saturated-fat foods such as nuts, seeds and processed palm and coconut oils. Its author, physician John McDougall, espouses that dietary changes can prevent or treat degenerative diseases. (His plan is based on dietary principles for people with MS introduced in 1948 by Dr. Roy Swank.)

Linge noted, though, that McDougall’s diet differs from another that has gained high profile among people with MS. Terry Wahls, also a physician, promotes a vegetable-intense menu – nine cups a day – that she says “reversed” her MS symptoms, getting her out of a wheelchair and back on her bike. Her diet excludes grains and allows grass-fed meats and oily fish such as salmon.

Brian Donohue
One often overlooked aspect of any diet is portion size. The diagram and phony food display appropriate portions for general health, Linge said, but MS diets tend to be even higher in vegetables.
picture of a dinner plate diagram with phony food

Treatment for MS consists mainly of medication and physical rehabilitation, so people with the disease are eager for any other helpful tactic. There isn’t an “MS diet,” per se, because patients’ symptoms vary so greatly, Linge said, but a number of proposed menus claim MS-specific advantages.

“There are anti-inflammatory diets. There’s a diet that eliminates protein-heavy foods like dairy and legumes because of concerns for autoimmune issues. Some diets preclude gluten on the premise that MS patients are more likely to have celiac disease. ”

Across these diets, fruits and vegetables are the common threads, Linge noted. She suggests a common-sense, heart-healthy (low fat and sugar, high fiber) diet tweaked to specific symptoms.

“If fatigue is a problem, I’d recommend foods and snacks that help with energy, simple-to-prepare items, and eating regularly throughout the day. People might eat comfort foods to deal with their MS diagnosis. Getting too heavy can affect a person’s mobility, so I’d look for low-cal substitutions for the current diet.”

For instance, she said, a slice of bread or English muffin are low-cal breakfast options to a scone or bagel.

Still, Linge is familiar with the anxiety and gloom that can stem from MS patients’ prognosis of dwindling capabilities. If McDougall's or another diet seems doable and doesn’t cause harm, “go ahead and try it. Run with it for a while.”

“You may not have to overhaul your diet to get some good results. I probably wouldn’t start with nine cups of veggies a day; maybe three. If it’s too difficult to achieve, you’re not going to stick with it. Take a smaller approach so that it’s achievable,” she said.