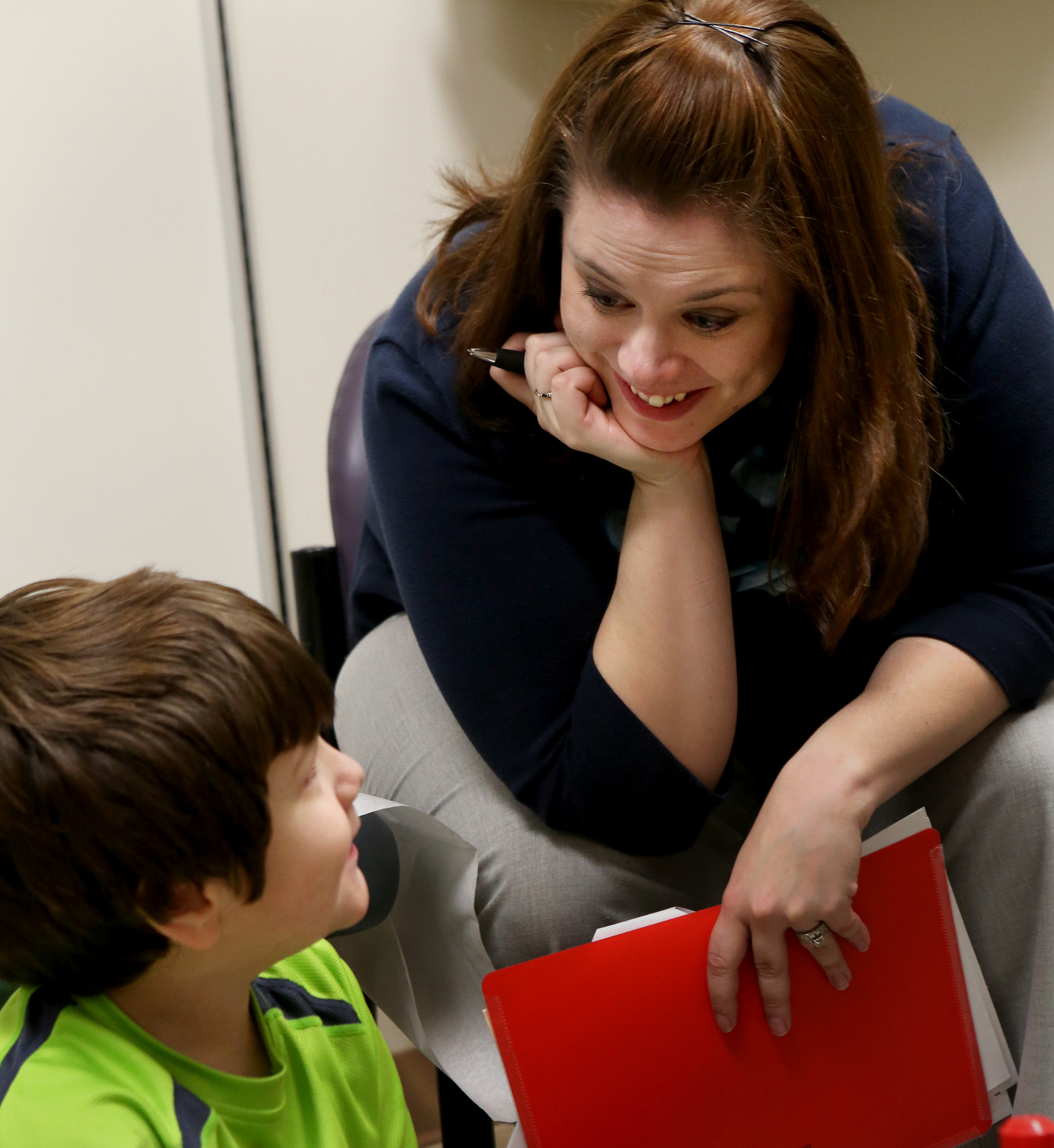 In his eight short years, Ayden has lived in nearly every corner of this country:   Texas, Connecticut, Alaska, and now Washington.

Meghan Behrmann, a University of Washington third-year developmental- behavioral pediatrics fellow completing a rotation at Madigan Army Medical Center, sits down next to him on the examining room’s car-themed rug.  She pushes a toy truck back and forth as she talks to him.

“How come you like to take froggy with you everywhere,” she asks, referring to the beloved frog blanket he is holding. “Does froggy make you feel better?”

His mom says that Ayden has some anxiety. He worries a lot about school and making friends. After many moves and his father’s deployments, he worries the family won’t be together again.

Stress is a big concern for families of children with developmental needs. This is especially true for military families.

“With active duty parents in the military, there is a level of uncertainty that doesn’t exist elsewhere,” Behrmann said.  “Are you going to be living in one place for a period of time? A lot of these families just don’t know what the future is going to look like. And when you have a child with a lot of medical and special needs that becomes important. The military does help provide for that, but it’s definitely a different kind of challenge that civilian families don’t face.”

Located 50 miles south of Seattle on Joint Base Lewis-McChord, Madigan Army Medical Center is one of only three designated Level II trauma centers in Army Medicine and one of only 10 military medical centers that train military residents and fellows. UW and Madigan have worked together training developmental-behavioral pediatricians for more than 20 years. Fellows from UW and Madigan rotate to Madigan, Seattle Children’s, and UW’s Center on Human Development and Disability (CHDD).

Dr. Beth Ellen Davis, director of the clinical training unit at the CHDD, came up through the military and has been on both sides of the affiliation—first in the Army and now at UW. As an Army doctor she completed her developmental pediatrics fellowship training at Madigan. When she retired from the military after 30 years, she served as program director at Madigan before coming to CHDD five years ago.

“This is a perfect partnership,” she said. “These fellows leave with a great education. They are ready to take on whatever it is they will need to take on, regardless of whether it’s on the military or civilian side.”

“Both patient populations are diverse, but in different ways,” Meagher said. “Due to the single-payer health insurance system in the military, we have less monetary restraints when recommending therapies or procedures for our patients. The civilian population faces different socioeconomic, language and cultural barriers.”

Though developmental pediatricians are in high demand, the numbers of physicians in the subspecialty are few. Nationally, just around 30 complete their training each year.  On average Madigan and UW bring three new fellows into this specialty each year. This means that the fellows rotating at UW and Madigan represent about 10 percent of the total developmental- behavioral pediatrics fellows training in the country. Their ranks may be growing.

Air Force Lt. Col. Eric Flake, Madigan's program director of Developmental Behavioral Pediatrics, said they have seven residents interested in training at Madigan next year. They may get approval to expand the program, which is historically capped at two.

“The end product of this collaboration is that some of the best developmental pediatricians in the country come out of this program,” he said.