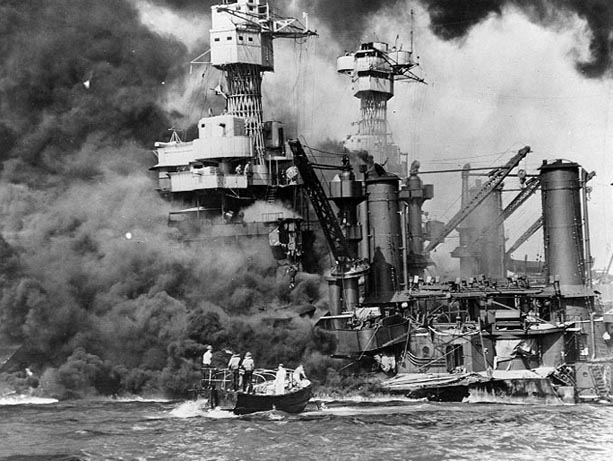 In 1936, while accepting his renomination for the presidency, Franklin D. Roosevelt said, “This generation of Americans has a rendezvous with destiny.”

On the deck of the battleship USS Maryland, he saw the Japanese planes swarming above Pearl Harbor, heard the explosions and saw bombs dropping on nearby Ford Island. The young officer scrambled with crewmates to an anti-aircraft gun battery, but the ammunition locker was padlocked. He managed to saw through the lock, and the battery finally started blazing away at the attackers.

Courtesy of Don Raleigh
Don Raleigh recalls the spectacle of a battleship firing a full salvo of 16-inch shells: “You can actually see the shells after they’re fired – it looks like eight Volkswagens flying out there.”
picture of Don Raleigh in Navy uniform

During the aerial assault, his ship lay about 1,200 yards away from the battleship USS Arizona. Today, at age 96, he still vividly remembers what happened when a Japanese bomb plunged through the Arizona’s forward deck and hit a powder magazine, mortally wounding the ship.

“They were tremendous explosions,” he says, adding drily: “It got your attention.” His own ship was hit by two bombs and lost three men.

Raleigh went on to serve for the rest of World War II in the Pacific, after which he joined the first class to enroll at the University of Washington School of Dentistry. He fought in critical battles including Tarawa, Kwajalein, Okinawa and Iwo Jima, ending the war with another ringside seat as history unfolded in Tokyo Bay.

Aboard the cruiser USS Wilkes-Barre, he watched through a gunnery rangefinder as Emperor Hirohito met with Gen. Douglas MacArthur on the battleship USS Missouri to sign Japan's formal surrender.

“We had a great view,” Raleigh says.

Raleigh had joined the Navy’s enlisted reserve in 1936 after graduating from high school in California. “Hitler was moving into the Ruhr (remilitarizing the Rhineland region in violation of the Treaty of Versailles), and you could see how things were going in Europe,” he said. “In the enlisted reserve, I had an idea I’d get training and be useful.”

He enrolled at the College (now University) of Puget Sound while continuing his Navy training and graduated in 1940. After receiving his commission as an ensign that year, he was assigned to the Maryland.

He’d majored in business administration in college, but after mustering out of the Navy as a lieutenant commander in 1946, he set a new course. A shipmate who’d been a civilian dentist had told him what a great life it was, and he liked the idea of going into practice after just four years of school. So in 1946, he enrolled at the brand-new UW School of Dentistry.

Courtesy of Don Raleigh
(Click to enlarge.) Raleigh, 96, wears his Pearl Harbor veteran's cap. He was among the UW School of Dentistry's first graduating class, in 1950.
picture of Don Raleigh

Raleigh graduated second in his class in 1950, earning induction into Omicron Kappa Upsilon, the dental honor society.  All but two of his classmates were returning servicemen, and they didn’t talk much about their wartime experiences, even among themselves. They were more focused on coping with their heavy course load and building a life in postwar America, he says.

“You were so busy, you didn’t have any time for outside activities,” he says. So what was the most fun they had?

“Making babies,” he says with a chuckle.

During dental school, Raleigh had two children with his wife, Alison, whom he’d married in 1944 while on leave and had known since they were children in Glendale, Calif. A third child was on the way when he graduated.

Raleigh practiced dentistry in Seattle for 42 years. Alison passed away in 1991, and the next year, he married Alda, whom he’d met in 1952 through her sister, a dental hygienist. Today they live  just a few blocks from the water in Edmonds, and he continues to be a popular fixture at dental alumni board meetings as the 1950 class representative.

As he looks back on his wartime service, he remembers those who sacrificed everything. One was his best friend, who died serving aboard the USS Tang when a malfunctioning torpedo ran wild and sank the submarine in 1944.
“I never had a choice,” he says. “I was in there for the duration.”