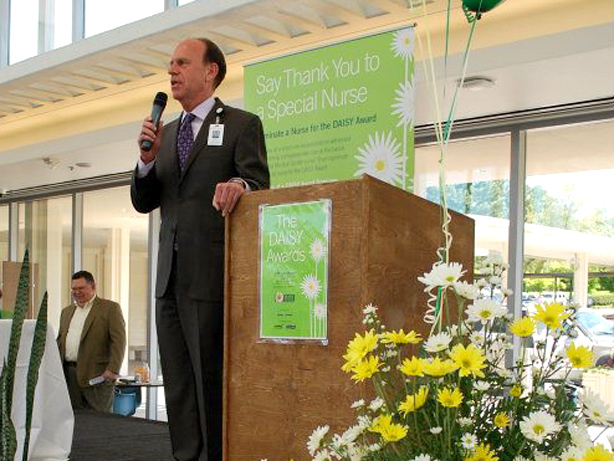 Hayes has more than 30 years of experience in healthcare, including the past 15 as executive vice present and chief operating officer at Valley Medical Center in Renton, a UW Medicine entity.

Hayes has more than 30 years' experience in healthcare.
picture of Paul Hayes

At Valley, Hayes has overseen multiple expansion projects and the rapid development of the hospital's community engagement. During his tenure, the facility has been recognized several times as a “Best Place to Work” by Seattle Business and Modern Healthcare.

Since 2012, when UW Medicine and Valley Medical Center formed a strategic alliance, Hayes has participated on UW Medicine leadership senior committees for the hospitals and clinics. He has a strong commitment to diversity and has served in a leadership role on UW Medicine's LGBT Committee.

Prior to working at Valley, he was chief operating officer at Alameda County Medical Center in Oakland, Calif. Hayes received his master’s degree from San Francisco State University and holds a bachelor’s in nursing from Creighton University and a bachelor of arts from the University of San Francisco. Hayes also completed the Johnson & Johnson's Wharton Fellows Program.

He will report to Johnese Spisso, Chief Health System Officer, UW Medicine, and to the Harborview Board of Trustees. Harborview is owned by King County, governed by a board of trustees appointed by the county, and managed by the University of Washington.

“The Board of Trustees is thrilled to announce that Paul Hayes will be our new executive director” said board president Lee Ann Prielipp. “He is a seasoned and experienced leader with proven experience in business development, operations, employee relations, and collaboration with medical staff. He also has a track record of developing innovative models of collaboration with the community. The board is confident he is the right person to direct the medical center’s outstanding leadership team in its future as we work together to improve the health of our community.”