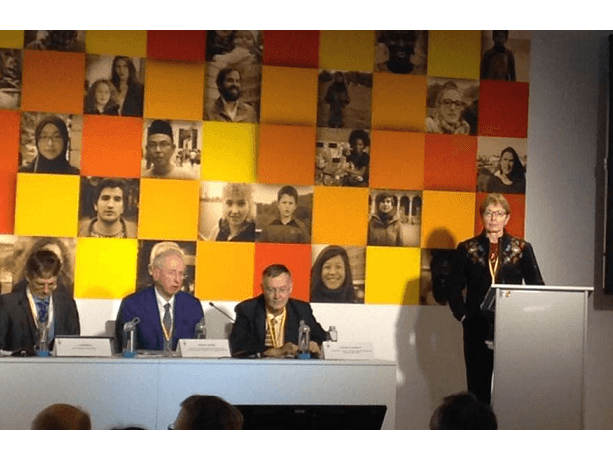 UW professor of global health Kristie Ebi has attended United Nations climate-change conferences since 2000. The agreement reached at the Paris conference in December, she said, was nothing short of monumental.

“It showed that world governments agree climate change is a serious problem and they are committed to addressing it,” Ebi said. She’s an expert on the health risks of climate change and how humans adapt to it. She addressed conference attendees on Dec. 5 and 11.

More than 190 countries signed a 31-page document agreeing that the average global temperature increase should be kept “well below” 2 degrees Celsius (3.6 degrees Fahrenheit). Further, it established that nations should aim for more stringent limits on temperature increases: 1.5 degrees Celsius (2.7 degrees Fahrenheit). Equally important, the countries agreed to meet every five years to renegotiate.

Ebi sat for a Q&A about her experience in Paris.

Q: What was the atmosphere of the conference?

A: There was tremendous spirit of collaboration to reach an agreement. The French and the secretariat for the United Nations did an incredible job on all scales, from having welcoming kiosks at the airports, to hiring people from the local community as greeters when delegates took buses to the venue, to doing an amazing job on the diplomatic end. It’s quite clear from countries’ comments that the agreement was as strong as possible at this time.

Q: What were some of the breakthroughs?

A: Countries came ready to compromise. Instead of being mandated to reduce emissions, countries were asked what they could do. Each country came forward with intended national determined contributions; that was a real shift in the negotiations. Breakthroughs also were achieved in adaptation, deforestation and other issues.

Q: What are some major differences among countries?

A: Overall, the United States is rather late to recognizing the risks of a changing climate, and in developing strategies to reduce risks over short to longer time frames. European countries have understood the risks for a long time; their research is about 10 years ahead of the United States’. Low- and middle-income countries have been experiencing impacts and, with the help of international development partners and specific adaptation funds, have been at the forefront of adaptation. For example, during an adaptation conference in Bangladesh about eight years ago, a field trip went to a coastal area experiencing saltwater intrusion into rice paddies. (Water intrusion decreases rice production.)  At one point, a farmer told the group, “Climate change has a taste: It tastes like salt.”

Q: What did you address at the conference?

A: I gave two presentations at side events, one organized by the Global Programme of Research on Climate Change Vulnerability, Impacts and Adaptation (PROVIA) and the other organized by the Sorbonne University. I spoke about the gaps in monitoring and evaluation across sectors and regions. The talk was given to about 40 people in the area of the climate conference reserved for country delegates and other select participants. Talks in this area were designed to inform the delegates of research relevant to the deliberations.

The second talk was part of a three-hour event for 200 people on the effects of climate change on health. I began my talk by saying the 21st century will be characterized by food and water insecurity and extreme climate events, with 85 percent of the impact on children. I discussed how health systems are trying to adjust. I discussed lessons learned from 14 multinational health adaptation projects, such as how China is adapting to heat waves and Fiji to vector-borne diarrheal disease.

To learn more about Professor Ebi's work on global environmental change, visit the UW's Center for Global Health and the Environment website.