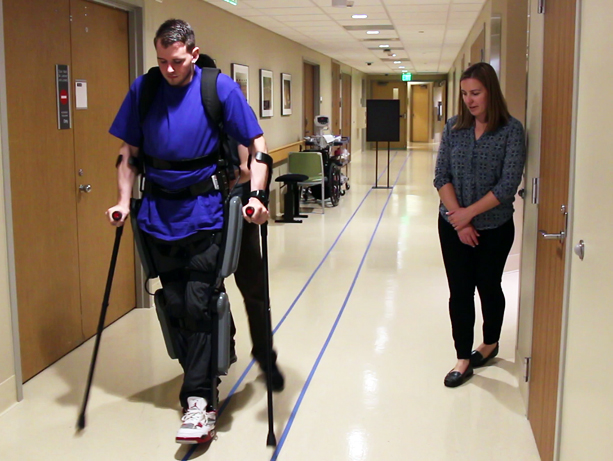 The last time Sean Maloney’s legs worked, they straddled his motocross in midair at the Riverdale Raceways in southwest Washington. Maloney, then 18, launched himself from the earth and landed badly, his life irrevocably changed.

That was June 10, 2012. In the past couple of months, though, Maloney has strapped on a battery-powered exoskeleton and done what many paraplegic individuals dream about: He has stood and walked.

He is the third patient in a yearlong pilot program at UW Medical Center that lets spinal cord-injured individuals recapture their height and stride, however temporarily.

The hospital’s Rehab Medicine Outpatient Service is leasing a trainer version of the exoskeleton for a year from the manufacturer, ReWalk, of Massachusetts. ReWalk’s is the only device of this type with U.S. Food and Drug Administration approval. UW Medical Center is the only Washington hospital using it.

“Our primary reason for developing this program is to give people with paraplegia the experience of walking.  This serves as additional data to decide whether this technology is suitable for them and worth purchasing,” said Dr. Maria Reyes, medical director of spinal cord injury rehabilitation for UW Medicine.

“These devices are still early in their development and we want to see which patients are the best candidates.”

ReWalk has sold the devices in Europe for several years, but the consumer model has been available in the United States only since last June. It costs $72,000 and, by and large, is not yet covered by U.S. insurers, though some patients have successfully made claims. A private donor is paying the costs that Maloney and other patients incur during the UW rehab therapy sessions, which also are not billable to insurers.

“These devices are still early in their development and we want to see which patients are the best candidates," said Dr. Maria Reyes, medical director of spinal cord injury rehabilitation for UW Medicine.
picture of Dr. Maria Reyes

And then there’s the emotional lift of walking, a high-priority wish among paraplegic patients, according to a much-cited 2004 survey.

Vaughn works with therapists to introduce patients to the wearable exoskeleton, which is driven by a rechargeable battery and computer worn in a backpack.

The computer takes cues from a tilt sensor on the wearable device and communicates with motors at each hip and knee to facilitate movement. The user tilts his or her upper-body to trigger this sensor to initiate and continue walking. The wearer must also employ forearm crutches and a wristband to select the intended mode of mobility (sit, stand, walk).

Strapped in, Maloney tilts his upper body forward to propel himself down a hallway in the rehab unit. Even this day, his 11th turn with the exoskeleton, his early attempts are halting; several times the device stops automatically after a few steps when the sensors perceive an improper weight shift.

Vaughn and physical therapist David Rascon huddle to troubleshoot. They tweak the crutches’ height and the software to achieve a longer stride length. Place the crutches a bit farther forward, Vaughn suggests to Maloney.

“It’s pretty cool,” he said. “It’s nice to stand up and walk, have a little freedom.”