Paper guides doctors in the disclosure of colleagues' errors

Paper guides doctors in the disclosure of colleagues' errors 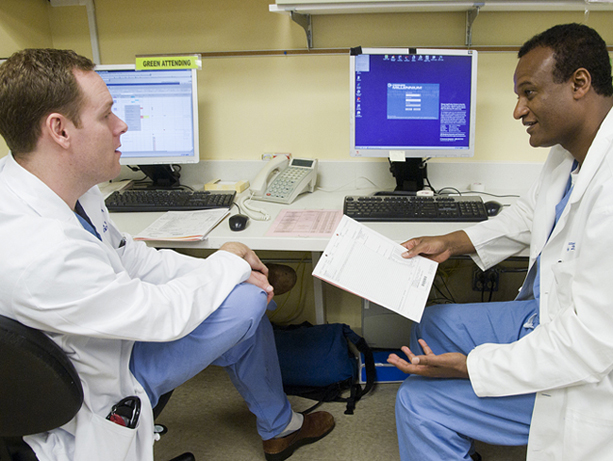 Physicians’ disclosure of errors has been studied more in the past decade than ever before, spurring rationales and guidelines for acknowledging one’s own mistakes with patients. Relatively little, though, has spoken to how physicians should broach mistakes made by colleagues.

“What do I do when it’s somebody else’s error and I have to decide whether to say anything to the patient?”

It’s the question Thomas Gallagher has fielded most often at the hundreds of error-disclosure seminars he’s led. Gallagher, a general internist and UW professor of medicine and of bioethics & humanities, is lead author of “Talking with Patients about Other Clinicians’ Errors,” an article published today in the New England Journal of Medicine.

Brian Donohue
UW physician and professor Tom Gallagher is internationally recognized for his study of the disclosure of clinical errors to patients.
photo of Dr. Thomas Gallagher

At its core, he said, the paper attempts to reframe what being a “colleague” means.

“What do professionalism and collegiality really call on us to do? The historical norm is that being a good colleague means not saying anything, having their back, when you think they’ve made a mistake. We’re asking people to turn toward their colleagues in those instances,” Gallagher said.

Barriers to these conversations abound: the lack of confidence in one’s disclosure skills, mixed signals from healthcare institutions and malpractice insurers, and potential repercussions such as being labeled disloyal, losing referrals and the specter of litigation all contribute to the culture of physicians looking away from problems.

“Part of the change that we and others are working toward is to take away that sense of shame and stigma when care has not gone well, and make it the norm to talk with one another about quality problems,” Gallagher said. “Everyone makes mistakes, so the norm should not be, ‘How do I keep this to myself?’”

Broaching a potential error with a colleague is more complex than a direct mea culpa to a patient. Beyond the confrontation itself, there are questions of whether and when to involve other clinicians or institutional administrators. The authors warn against speculation and give guidance to fact-finding without provoking defensiveness.

Institutions should provide leadership in bringing about these conversations, the authors wrote, by strengthening “atmospheres of trust in which people are encouraged, even rewarded, for providing essential safety-related information.” Many have adopted disclosure-coaching programs to help facilitate peer-to-peer discussions, the paper said.

The movement to transparency is grounded not only in an ethical obligation to patients, but also in the mandate to improve the quality of healthcare.

“That we struggle to ask colleagues to have discussions when care has not gone well is a major drag on our ability to learn from problems and prevent recurrences. Doctors are going to have to get much better with having that awkward conversation. Institutions need to figure out what they can do to support that,” Gallagher said. “Being transparent is really a collective responsibility.”