Over miles and 18 wheels, backache is frequent companion

Over miles and 18 wheels, backache is frequent companion 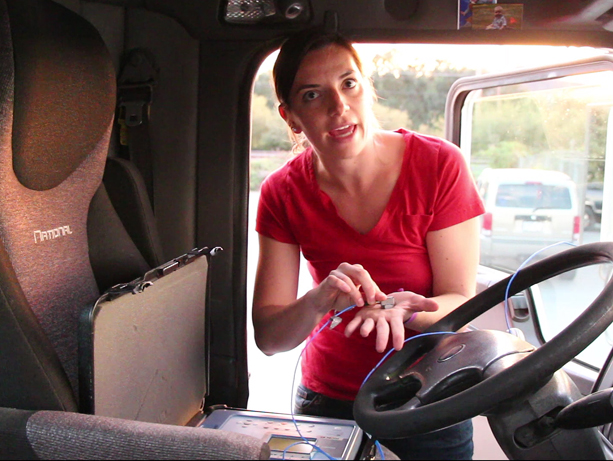 Fifty-one summers after he first clambered into a truck cab, Bob Olson is still driving long-haul. In July he logged 2,800 miles a week between Puget Sound and Spokane, watching mileposts click by on 10-hour, there-and-back loops that ended around sunup.

The tedium of moving freight across interstates is bearable, he said, but backaches and leg pains are too-common companions.

That’s why, over much of the past two years, researchers from UW’s School of Public Health have become regulars at Peninsula Truck Lines in Auburn, a highway-side hub where Olson’s trips begin and end and diesel plumes never really settle.

The researchers were measuring whether two seats, one a standard, air cushion replacement and one with high-dollar, vibration-reducing technology, correlated with different levels of pain and function among 16 Peninsula drivers.

Olson and fellow long-haulers worldwide experience whole-body vibrations to a greater extent than drivers of cars, taxis or buses. Long hours, limitations to the suspension of the multi-ton rigs, and seats that inadequately buffer bumps adversely affect drivers’ bodies – most often, their lower backs.

“We know that active-suspension seats reduce vibration by half,” said Pete Johnson, UW associate professor of environmental and occupational health sciences and the study’s lead investigator. “This study hopes to document whether they could provide direct health benefits by reducing a driver’s exposure to vibration.”

At the study’s outset, drivers either got a new standard seat or a $6,000, active-suspension seat made by Bose – the company known for its technology to modulate the vibrations of sound systems.

“Current seats use air or hydraulics to reduce vibration, but they respond very slowly. They can only get rid of gradual road perturbations occurring at slow speeds,” Johnson explained. “The Bose seats have a linear electromagnetic actuator and microprocessor. An accelerometer in the base of the seat perceives the bumps coming to the driver, so the actuator is pretty much in real time attenuating bumps, even at high speed over freeways.”

Olson got the Bose seat. Nine months into the study, he said, “My backaches have disappeared. We’re still working on adjustments for the leg pains.”

Such affirmations represent the anecdotal feedback Johnson’s team has heard. Another Peninsula driver, David Harbst, said the active-suspension seat reduced his need for a chiropractor.

During the study, UW’s field researchers periodically connected instruments to the truckers’ seats to record vibration levels over the course of a 12-hour shift, and took drivers through series of questions about back pain and function.

A parallel UW study involving the same drivers evaluated whether road vibration and noise affected their balance. Drivers were asked to stand on a Wii Balance Board before and after a shift to see whether the long drive made them wobbly.

Washington, one of only four states that manage the workers’ compensation program for all employees in the state, is collecting data on truckers’ exposure to vibration, and associated health effects, so safety specialists and policymakers better understand the problem’s magnitude, said Han Kim, an L&I ergonomist.

“We are particularly interested in [balance data], as it would help to understand what contributes to widespread costly injuries from slips, trips and falls in truck drivers,” Kim noted.

Johnson expects to finalize the report by year’s end. In the future, if a driver has a claim, “maybe the active-suspension seat can be part of the process to return people to work,” he suggested.

“I would love to do a cost-benefit analysis, because if you amortize the cost of the butt time in the seat and the cumulative cost of claims, these active-suspension seats might be very cost-effective as primary prevention,” he said.