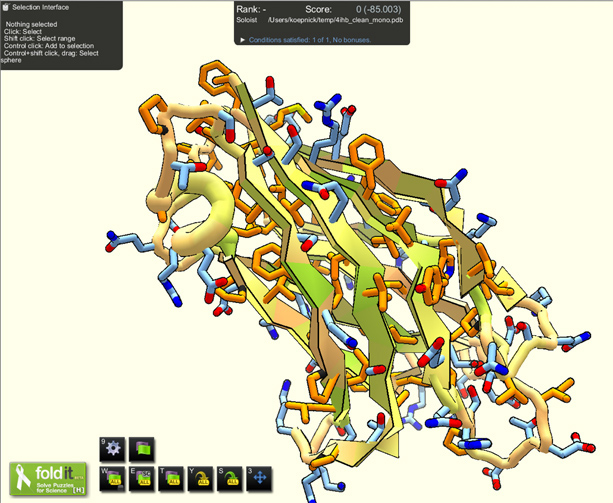 Gamers who have helped scientists understand the structure of hundreds of complex proteins by playing an online protein folding game Foldit are being invited to help work out the structure of an abnormal protein that causes a disabling muscle disorder called limb girdle muscular dystrophy. The project hopes to enlist thousands of volunteers from around the world to help determine the shape of the protein that lies at the root of the disease.

Limb girdle muscular dystrophy, or LGMD, is a rare, inherited disorder that primarily affects the muscles of the upper arms and legs. As the disease progresses, it becomes increasingly difficult for people with LGMD to perform such common activities as lifting objects, standing up from a chair, or climbing stairs. As the disease progresses, it becomes increasingly disabling. Currently there is no effective treatment or cure.

“This project is a great opportunity for us to build awareness of this rare disease and improve our understanding of its causes,” said Dr. Bradley Williams, director of Research & Diagnostic Innovation at the foundation and an LGMD patient.

Proteins are made of a string of molecules, called amino acids, which are linked together like beads on a string. The sequence of the amino acids determines the folded shape a protein takes, which in turn determines how the protein works. In order for proteins to function properly they must fold into the right shape. If they don’t, they won’t work well, if at all, which can result in disease.

In the new project, which will be launched on Limb Girdle Muscular Dystrophy Awareness Day, Friday, Sept. 30, the Foldit players will focus on a protein called dysferlin that is believed to help maintain muscle cells and allow them to recover from injury.

People who inherit genes responsible for one form of LGMD, called LGMD-2B, cannot make normal dysferlin. As a result, they become weaker and weaker as their muscles gradually deteriorate.

The goal of the project is to work out the structure of dysferlin to better understand how it functions and what other proteins it interacts with. This information could lead to better treatments and perhaps a cure. LGMD-2B is a special interest of the Jain Foundation, which was founded by Ajit Jain, whose son has the disease.

Although it is often possible to predict the shapes proteins will assume with computer programs that can calculate complex interactions between amino acids within the protein chain, it turns out that humans, with their creativity, intuition and their acute spatial awareness, often can solve protein-folding problems that computers alone cannot.

To harness these abilities, protein researchers at UW Medicine collaborated with the University of  Washington Center for Game Science to design Foldit, an online computer game. This game allows citizen scientists working from their home computers to manipulate computer models of proteins to try to arrive at the shape the proteins most likely assume in nature.

Since the game was launched in 2009, more than 400,000 Foldit gamers, most of whom have no scientific background, have had the results of their team work published in major scientific journals such as Nature, Science and the Proceedings of the National Academy of Sciences.

“We are optimistic that the creative approaches of our 400,000 Foldit players will accelerate our ability to understand dysferlin’s function and lead us to better treatments for muscular dystrophy,” said UW Medicine researcher Dr. David Baker.  A UW professor of biochemistry and a Howard Hughes Medical Institute investigator, he heads The UW Institute for Protein Design.

To learn more about LGMD and the efforts by the Jain Foundation to find a cure visit www.jain-foundation.org

If you are interested in working on this project or are just curious about Foldit, visit www.fold.it