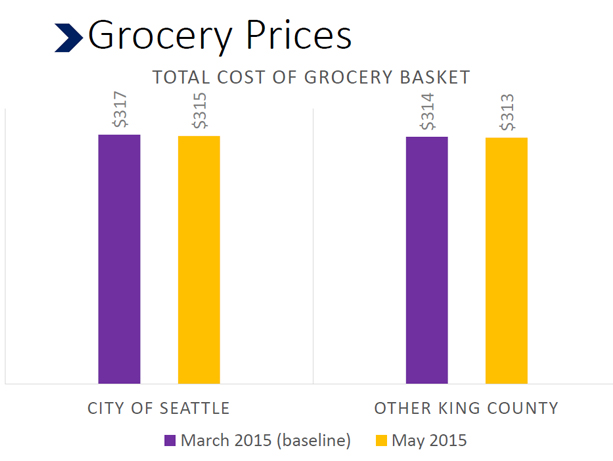 Before Seattle increased the minimum wage, many local businesses said they planned to raise prices in order to cover higher payroll costs. One year after the wage hike took effect, researchers have found scant evidence of any impact on prices – good news from a public health perspective. (See PDFs 1, 2)

“Our preliminary analysis of grocery, retail, gasoline, and rent prices has found little or no evidence of price increases in Seattle relative to the surrounding areas,” wrote researchers from the University of Washington.

That’s good news for workers, many of whom were expecting price increases to cut into their wage gains.

“Our study included in-depth interviews with a number of low-wage workers who are trying to raise families and make ends meet,” said co-investigator Jennifer Otten, assistant professor of nutritional sciences in the UW School of Public Health. “Many of them told us they expect higher wages to make a difference in terms of helping them buy food and other basic necessities, but they are skeptical.”

She said many are worried that their increase in income will be offset by higher market prices and declines in benefits, such as housing vouchers and food stamp (or SNAP – Supplemental Nutrition Assistance Program benefits) that will occur as their income goes up.

“We know higher incomes are linked to better health and quality of life,” Otten said. “What we don’t know is how much of an increase these workers will experience because of potential offsets in other areas. For example, will their increase in income be enough to see long-term gains in diet and chronic disease outcomes? To gain an understanding of these relationships, we are closely tracking data, such as supermarket prices, and asking families about their purchases.”

The researchers – known as the Seattle Minimum Wage Study Team –presented preliminary findings in a report on Monday, April 18, to the Seattle City Council. Researchers were hired by the city to conduct an evaluation of the wage hike, which took effect April 1, 2015. Seattle was one of the first cities in the nation to raise the minimum wage, with plans to gradually increase it to $15 an hour by 2017.

The University of Washington team surveyed more than 500 Seattle businesses, interviewed 55 workers, and collected price data from the web and through in-person visits to grocery stores, restaurants and other retail spots.

The team went to a dozen Seattle-area grocery stories to track prices. Members also checked gasoline prices from 120 stations in and outside of the city, as well as apartment rents from Craigslist, and retail prices from a combination of web searching and in-person collection.

Rents are rising fast in the booming Seattle area, while gasoline prices have fallen thanks to plummeting world oil prices. However, those trends were consistent in and outside of the Seattle area and are playing out regardless of the minimum wage, the report indicates.

Researchers noted that broader price increases may come down the road, and they plan to continue their research, pending funding.