Noted geneticist once was turned away from U.S. shores

Noted geneticist once was turned away from U.S. shores 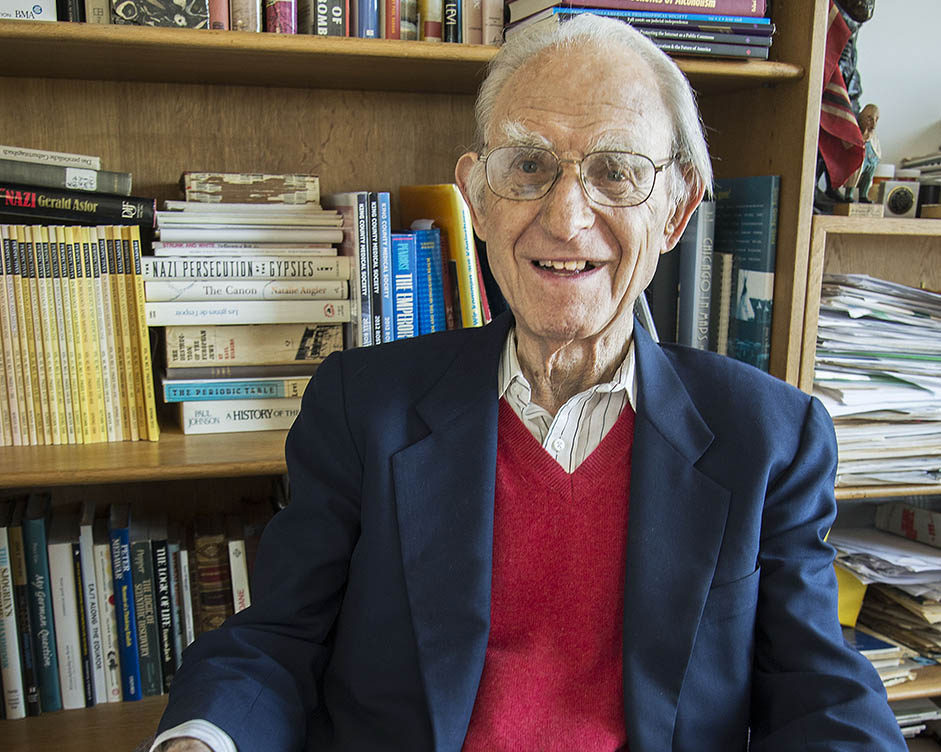 At age 91, Arno Motulsky, UW professor emeritus of medicine and genome sciences, is soft-spoken and unassuming. When he talks about his career, he is circumspect and modest.

Born of Jewish parents near Koenigsberg, Motulsky had a happy childhood, free of any trouble.  That changed in 1933. The Nazis took over the German government and mounted a vicious campaign against Jews. They set synagogues afire, destroyed shops, and marched men into concentration campus.

"We were frightened. At age 15, I wrote in my diary, 'What will happen to us if Hitler were to win the war? Will he send us all to an island such as Madagascar and sterilize us to do away with the Jews?' I and others had no idea at the time that the Nazis might be killing six million European Jews in the early 1940s.”

Motulsky's father was forced to leave Germany and escaped to Cuba.  He intended to immigrate to the United States, to Chicago, where his brother lived.  The hope was that his wife and three children would  emigrate later.

However, with tight immigration quotas, the remaining family could not leave Germany until May 1939. They departed with almost 1,000 other German Jews on the ocean liner SS St. Louis.

Motulsky said, "Once the ship arrived in Havana, the Cuban government had invalidated our landing certificates.  Passengers were not allowed to go ashore.  My father and others chartered small boats and came within a few yards of the St. Louis but were not allowed to come aboard.  We saw my father but could not hear him. We were so close, but yet so far. "

Denied landing, the ship turned back toward Germany and passed the coast of Florida.

"Despite worldwide newspaper publicity about the voyage of the St. Louis, telegrams from American organizations and petitions to President and Mrs. Roosevelt, we were not allowed to land in Miami.” He recalled the U.S. response:  We will not make exceptions for the St. Louis. The ship came close to Halifax, but the Canadian government turned it away.

“Facing a return to Germany made for plummeting morale on board,"   Motulsky said.

Three days before the ship was to arrive in Germany, the Belgian, British, French and Dutch governments granted the passengers temporary asylum.  The Motulsky family was sent to Brussels, where Motulsky attended high school.  A year later the family obtained U.S. visas.  Before they could leave, the German army attacked Belgium.  Motulsky, with other German Jews, was considered an enemy alien of Belgium.  The teenager was separated from his family and sent to a succession of internment camps in France where life was grim with little food and much disease.

"After about a year some of us were moved to a camp near Marseilles.  We were allowed to visit the American consulate and apply for U.S. visa renewal." Ten days before he turned 18, Motulsky crossed into Spain and boarded a Portuguese ship sailing to New York.

"If my French, Spanish, Portuguese and U.S. visa had taken any longer, I would not be here.  Franco, the Spanish dictator, had barred males over 18 from traveling through Spain. I would have ended up in the gas chambers of Auschwitz, like many others."

Motulsky reunited with his father in Chicago and took pre-medical courses evenings and Saturdays while working week days in a hospital laboratory.

"When I was 20, I joined the U.S. Army which needed doctors for the war.  I was selected for the Army Specialized Training Program.  Guess where they sent me?  Imagine.  From the grim internment camps of France to Yale University. What a country!"

Later Motulsky entered the University of Illinois medical school in Chicago where he earned an M.D. degree with high honors. During an internal medicine residency, Motulsky was mentored in hematology by Karl Singer at Michael Reese Hospital in Chicago. Afterward, he re-enlisted in the U.S. Army, which assigned him to a blood disease lab at Walter Reed Hospital in Washington, D.C.

After two years in the Army, in 1953 Motulsky was recruited to the UW faculty. "The relatively new medical school,” he said, “had an excellent hematologist [Clem Finch], who was looking for young faculty members."

After learning that several blood diseases, such as sickle cell anemia and others were genetic,  Robert Williams, the Department of Medicine chair, encouraged Motulsky to start a Division of Medical Genetics.

The UW became one of only a few medical schools providing training in medical genetics.  It attracted physicians interested in the field, who went on to become faculty at other institutions in the United States and Europe.

Motulsky and his former trainee, Joseph Goldstein, who received the Nobel Prize in Physiology or Medicine for his work in medical genetics.
Motulsky and Goldstein

“Among my many trainees was Joseph Goldstein,” Motulsky said. “He continued his research at the University of Texas Southwestern Medical Center, and won the Nobel Prize in Medicine in 1985.”

Motulsky helped establish one of the first clinics in the country to provide family counseling for genetic diseases and to employ women in this profession.

In 1957 Motulsky reported that in some cases individuals may have genetic mutations that cause unexpected drug reactions.  In other cases, a medicine is ineffective because of mutant genes.  These findings opened the field of pharmacogenetics.  Personalized medicine began.

He also documented the earliest known appearance of the AIDS virus in humans. It was detected in a single sample from his collection gathered originally to study the genetics of blood diseases associated with malaria. The specimen came from what was once the Belgian Congo.  The finding helped show that the human virus originated in Africa.

More recently, Motulsky studied the genetics of color vision.  He and Samir Deeb found that some people perceive the same color differently, depending on minor genetic variants that do not cause color vision defects.

Motulsky has written more than 400 scientific articles and co-authored, with F. Vogel, a definitive text for study and teaching human genetics, now in its fourth edition.

Motulsky considers the Human Genome Project and its offshoots to be among the most exciting recent advances in science.

"These have helped us to better understand what genes are and how they work, but it will be awhile before many discoveries can be applied to human disease. We all would like things to move more quickly, but it takes patience and perseverance to obtain detailed understanding.  But if I compare what we now know to what we knew not so long ago, it's amazing."

Looking back over the extraordinary arc of his life, Motulsky said: "I feel that I was lucky at so many stages in my life. There were times when things that could have happened did not take place.  I had the opportunity to work on topics that have been helpful to others and interesting to me. I sometimes would like to hibernate'for 30 years, then wake up  to find out the status of genetics and genomics as applied to medicine."