No sign of heart muscle repair after stem cell injections

No sign of heart muscle repair after stem cell injections 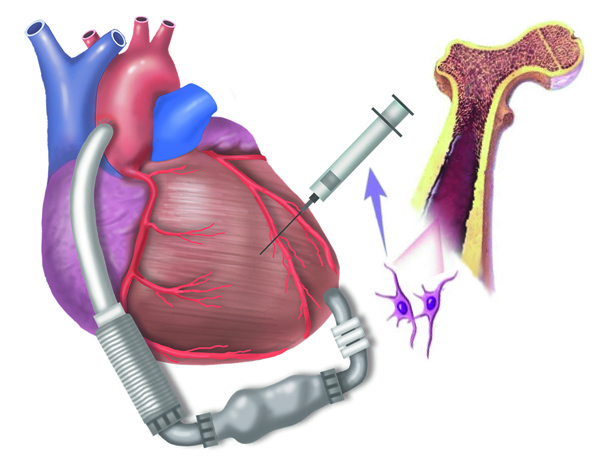 A small study by University of Washington researchers has found no sign that bone-marrow stem-cell injections stimulated repair in the damaged hearts of patients awaiting transplantation.

The results were published in the Journal of the American Academy of Cardiology. Dr. April Stempien-Otero, UW associate professor of medicine, was the paper’s lead author.

In recent years, a number of studies have suggested that injecting damaged hearts with stem cells from bone marrow may help the heart muscle heal and improve its function. In animal studies, such injections have stimulated new blood-vessel formation, reduced scarring and strengthened heart contractions. Subsequent small studies in humans have, in some cases, indicated improved function in patients' hearts.

Researchers enrolled six patients with severe heart failure who were awaiting transplantation. The patients’ heart function was so poor that they needed to have heart pumps, called left ventricular assist devices, or LVADs, implanted to sustain them until donor hearts became available. The LVAD implant surgery was the researchers' opportunity to inject bone marrow cell preparations into the heart muscle.

During surgery to implant the LVAD, the researchers injected the cells from each batch at separate sites on the heart, and, for a control, injected a fourth site with a saline solution. When a donor heart became available and diseased heart was removed, the researchers examined it to see if the injected cells had any effect on the heart tissue.

The injections appear to confer little, if any, benefit. In fact, by one measure, the presence of endothelial cells, which line blood vessels and would be present with new blood-vessel growth, was lower at the CD34+ injection sites than at the saline injection sites. The only prospective upside was fewer activated myofibroblasts, cells that contribute to scarring, in heart muscle where the CD34+ and the CD34-depleted cells were injected.

"The failure of the treatments to show benefits reminds us that animal studies aren't sufficient to predict how the therapies will work in humans," Stempien-Otero said, "and studies that examine the mechanisms by which stem cell treatments affect tissues in humans need to be done before large-scale human trials begin with other therapeutic cell products."
The injection procedure itself appears safe, which Stempien-Otero said is an encouraging outcome. Patients who had the injections had no more complications than did patients who had received an LVAD implant without injections.

The research was funded by National Institutes of Health (NIH R01 HL094384 to ASO), UL1TR000423 (UW Institute for Translational Health Sciences) and the Tall Family Foundation of Seattle.