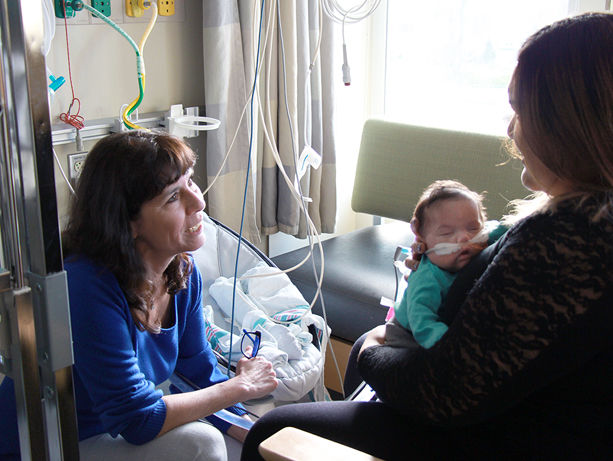 Seasha Hassett pondered the invitation from a UW Medicine doctor: Would she be willing to enroll her twins, born prematurely at 25 weeks' gestation, in a trial of a new therapy that might prevent brain injury?

“I wasn’t sure I wanted to do this at first, but my husband convinced me it was a good idea,” said Hassett, who now spends much of her time chasing 18-month-old Tessie and Timothy Jr. around the couple’s Oak Harbor, Washington, home.

“It” refers to the PENUT (preterm epo neuroprotection) trial, run by Dr. Sandra Juul. Its aim is to examine the effect of the drug erythropoietin (e-rith-ro-PO-e-tin, “epo” for short) on the brains of 940 babies born between 24 and 28 weeks. They are the tiniest of “preemies” – babies born before 37 weeks.

Started in 2013, PENUT investigators received $10 million from the National Institutes of Health to enroll and follow these babies during their hospital stays and beyond, to 2 years of age. UW Medical Center’s team is coordinating the study across 29 U.S. hospitals.

Epo is a naturally occurring hormone that encourages the production of red blood cells. Premature babies do not produce enough of this hormone. Juul and others think epo might prevent the neurological and cognitive disorders that emerge in about half of all preemies.

The drug is administered to newborns within 24 hours of birth and a total of 10 injections between birth and 33 weeks. Cognitive and neurological tests are conducted at 2 years.

“Epo seems to be safe, and we’ve found in animal studies and preliminary studies in human infants that it improves outcomes,” she said. “If it improves neurological outcomes, that’s a home run.”

As many as 50,000 babies a year in the U.S. may be eligible to receive the drug. Preemies are prone to neurological disability, cerebral palsy, deafness and blindness. Autism and ADHD are more common, too.

Juul was a pediatrician and neonatologist when she decided to dive into epo research more than two decades ago. “Thirty years ago, the focus on preemies was keeping them alive. We just didn’t know how to take care of them.”

The Hassetts were among the first families involved at UW Medical Center, where 62 babies currently are enrolled, among 741 overall. The study is expected to end in 2018, with formal findings published shortly thereafter.

Hassett will not know if her twins received the actual hormone or a placebo until then. But she suspects the twins may actually have received the real deal. So far they have no complications despite their extremely early entry into the world in 2014.

“I have met some families who did not opt to go with the trial, and their babies have had major complications,” she said, before begging off the phone – the twins had just woken up from a nap. “There is such a difference, it makes us hope and believe that the drug had something to do with this miracle.”

Related: A legacy emerges from a local family's NICU experience