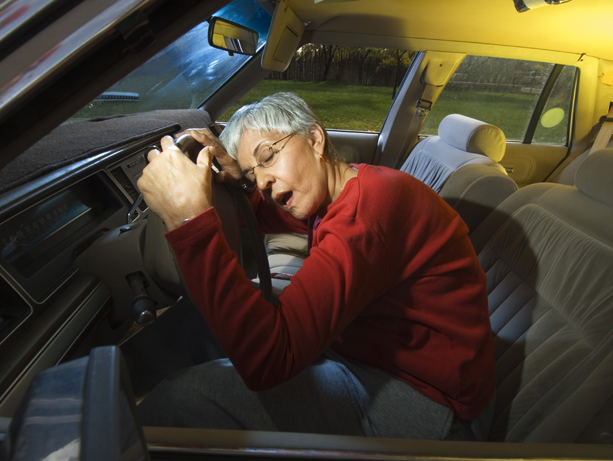 Three prescription sleeping aids are associated with an increase in motor vehicle crashes, according to a study by the University of Washington School of Pharmacy and the Group Health Research Institute. The research was published today in the American Journal of Public Health.

Sarah Guthrie
“There’s a public safety concern that we want health providers and the general public to be aware of," said Ryan Hansen, shown holding the prescription drugs involved in the study.
picture of Ryan Hansen of UW School of Pharmacy

For new users of all three prescriptions, exposure nearly doubled the risk of vehicle crashes. For new users, the increased risk could last for up to one year of continuous prescription-filling. Among the three drugs analyzed, temazepam appeared to offer the least risk for motor vehicle crashes, but may have other associated risks for some patients.

“Depending on an individual’s need to drive regularly, combined with a medical indication for sedative use, the choice of a particular sedative may affect the risk of crashing," the scientists wrote. "Prescribers, pharmacists and patients should discuss this potential risk and consider the implications of this analysis when selecting a sedative hypnotic medication."

The study grew out of a conversation with a family friend when Hansen was seeking a dissertation topic some years ago. The friend said that he had taken a sleep aid the night before, woke up in the kitchen, and noticed a bite was taken from a piece of raw pork in the fridge.

“As a pharmacist and a researcher, that had me wondering about the affect these sleep aids have and how we might measure their impact.” He identified a way to link motor vehicle crash records with prescription drug data and identified a trend among people who had new sleep-aid prescriptions for these three drugs.

“There are many approaches to the management of insomnia, including lifestyle changes such as cutting caffeine intake and exercising, which may alleviate the insomnia without medications,” Hansen said. “There’s a public safety concern that we want health providers and the general public to be aware of.”

The team emphasized the need for additional research to evaluate the risks and associations between overall medication use and traffic crashes. Noted Hansen: “People with questions or concerns about a new sleep aid prescription should talk with their physician, pharmacist, or health provider to understand the risks.”