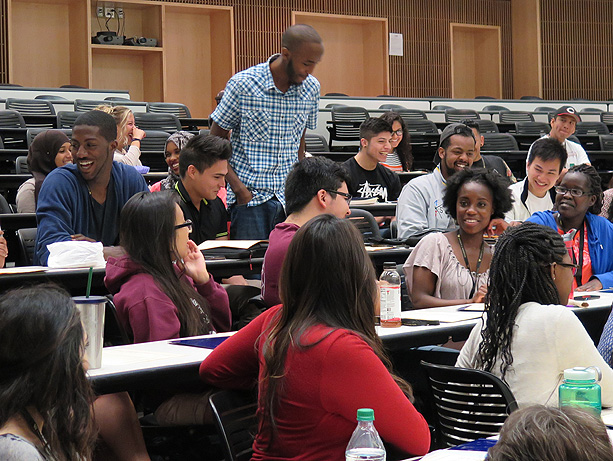 In a push to keep health professions on pace with changing demographics, the University of Washington will create a Health Professions Academy to cultivate and recruit undergraduate students from disadvantaged and underrepresented backgrounds to enter health sciences as a career.

The academy is a collaboration of the schools of Medicine and Dentistry and the Office for Minority Affairs and Diversity. It is funded by a $1.9 million grant from the U.S. Health Resources and Services Administration. UW was one of 17 institutions funded from among 150 applicants.

“We will recruit students during their freshman year and have them enrolled by the summer,” said Leo Morales, UW professor of medicine and chief diversity officer for the School of Medicine.

UW has six health sciences schools: dentistry, medicine, nursing, pharmacy, public health, social work.  Morales said he expects to enroll 30-40 students in the first year, initially for pre-medical and dental programs, with the goal to expand to the other the health sciences.

“As we grow and learn, we hope to offer this program to students enrolled at UW-Tacoma and Bothell,” he said.

The funding is through the 2015 Health Careers Opportunity Program, authorized under the U.S. Public Health Service Act. The program seeks to assist individuals from disadvantaged backgrounds undertake education to enter a health profession.

The Bureau of Labor Statistics predicts employment in the healthcare industry will increase 29 percent through 2022, compared with an average of 11 percent for all other industries. And it has been well-documented that increasing racial, ethnic and cultural diversity among health professionals is associated with improved quality of care for minority patients.

Susan Coldwell, associate dean for student services and admissions in the School of Dentistry, said disadvantaged students often lack the mentorships required to apply successfully to a professional school. “UW already has a lot of great programs in place,” she said. “The Health Professions Academy is designed to insure that students are utilizing that programming and also augment it with mentorship, additional coursework and shadowing opportunities.”

According to the U.S. Bureau of Labor Statistics, more than 81 percent of university graduates (2009-2010) were from families in the top-income distribution. The disparity is more pronounced when considering advanced health-profession degrees among underrepresented minorities. For example, among medical degrees granted nationwide in 2013, just 5.5 percent were to African- American/Black graduates (12.3 percent of the U.S. population) and 4.8 percent Hispanic (17 percent of the U.S. population).  In 2011, only 3.3 percent of newly licensed dentists in Washington state were African-American/Black, and just 5 percent were Hispanic, according to the Washington State Dental Association.