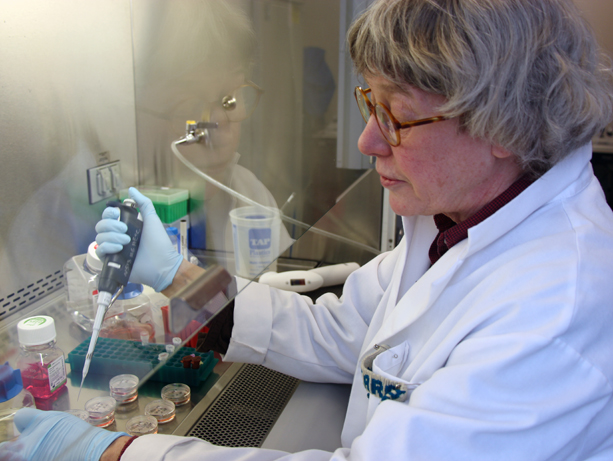 University of Washington researchers have created a line of human embryonic stem cells with the ability to develop into a far broader range of tissues than most existing cell lines.

“These cells will allow us to gain a much greater understanding of normal embryonic development and have the real potential for use in developing ways to grow new tissues and organs for transplantation,” said Carol Ware, a professor of comparative medicine. She is the lead author of a paper describing the new cell line.

The findings are reported in the March 10 issue of the journal Proceedings of the National Academy of Sciences. The cells, called naïve embryonic stem cells, normally appear at the earliest stages of embryonic development. They retain the ability to turn into any of all the different types of cells of the human body — a capacity called "pluripotency."

While these transgenic cells are valuable research tools, the presence of artificially introduced genes meant the cells will not develop as normal embryonic cells would nor could they be safely used to create tissues and organs for transplantation.

In an article, Ware and her colleagues from the UW Institute for Stem Cell and Regenerative Medicine describe how they successfully created a line of naïve human embryonic stem cells without introducing an artificial set of genes.

They first took embryonic stem cells that are slightly more developed, called primed stem cells, and grew them in a medium that contained factors that switched them back — or “reverse toggled” them — to the naïve state. They then used the reverse toggled cells to develop a culture medium that would keep them in the naïve state and create a stable cell line for study and research.

Then having worked out how to maintain the cells in the naïve state, Ware and her colleagues harvested naïve cells directly from donated human embryos and cultured them in the maintenance medium to see if they could create a stable cell line that had not undergone reverse toggling. After many tries, they succeeded.

While the “reverse toggled” cells are much easier to create and will prove valuable research tools, Ware said, the cells that were directly derived from embryos are the more important advance because they are more likely to behave, grow and develop as embryonic cells do in nature.

The new cell line is called Elf1: “El” for the Ellison Foundation, a major supporter of the lab’s work; “f” for female, the sex of the stem cell; and “1” for first.

Funding for the research came from The Ellison Foundation, the State of Washington Life Science Discovery Fund (4553677) and a National Institutes of Health, National Institute of General Medical Sciences Grant P01 GM081619-01.