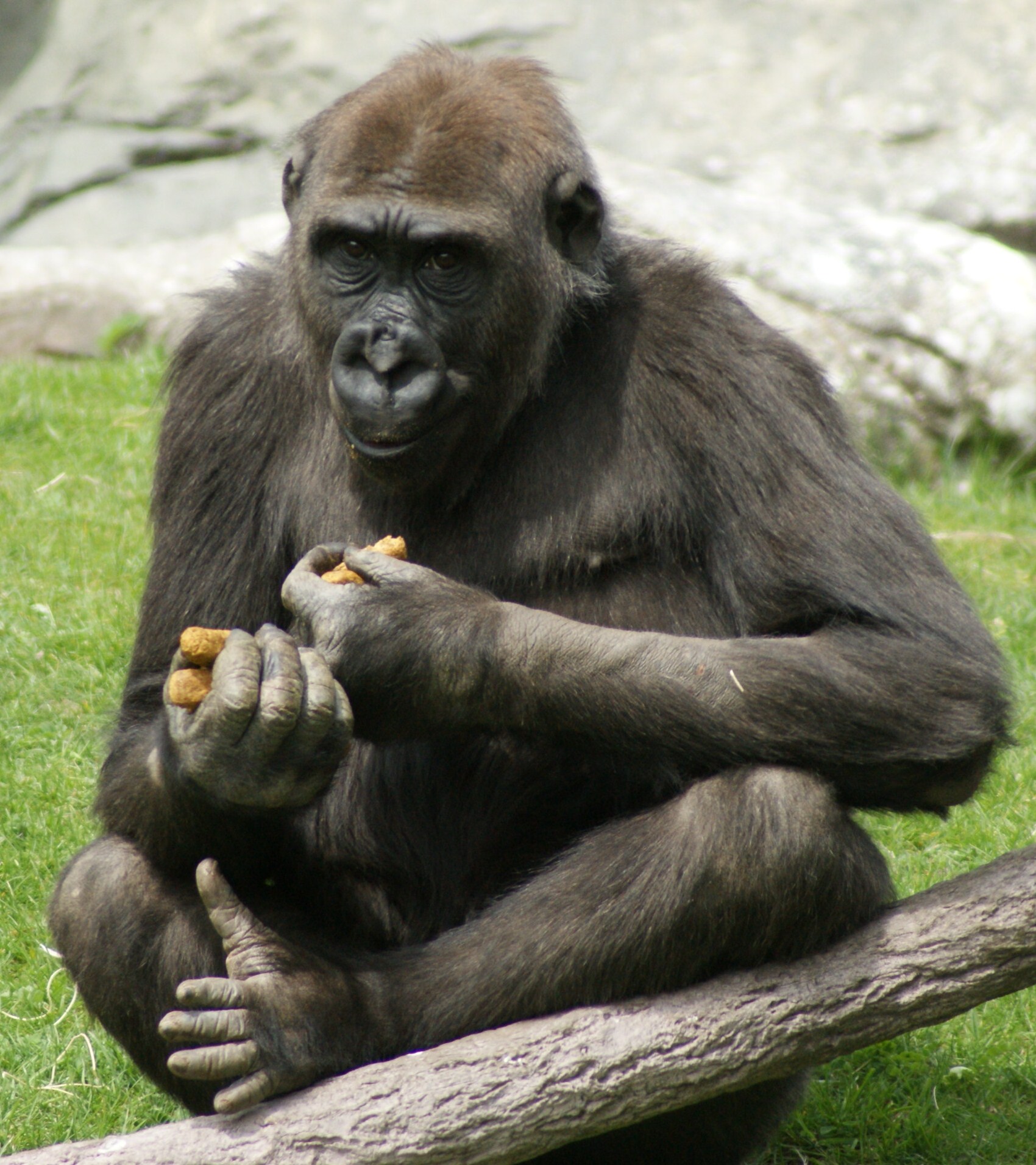 The genome of the Western lowland gorilla has once again been sequenced and assembled, but at a much higher level of quality beginning to approach that of the mouse and human genome. A new sequencing technology, based on longer sequence reads, allows previously undetected genes and missing forms of genetic variation to be discovered for the first time.  This assembly offers new biological insights into a living species that is second only to chimps in its evolutionary closeness to humans.

Reporting in the April 1 edition of Science, researchers led by Evan Eichler, University of Washington professor of genome sciences, explained why previous genome assemblies for the gorilla and other mammals have been fragmented, incomplete, and potentially misleading:

Massively parallel sequencing technologies, while increasing the speed, improving the accuracy, and reducing the cost of genome sequencing, typically produce only short stretches of sequences called “reads.” After sequencing, the reads are pieced back together using genome assembly software to try reconstruct the original genome by using the overlap between the sequence reads. Unfortunately, the presence of long, repetitive DNA, which is common in human and other primate genomes, confuses assembly software and causes it to break the genome into very small fragments.

“Such assemblies can be like Swiss cheese,” Eichler said, “with a lot of missing biological information in the gaps.”  The original published Western lowland gorilla genome using the short-read technology, he said, was broken into more than 400,000 pieces.

“These gaps are not random, but are clustered at sites of repeats,” he said. “If geneticists can’t capture these repeats and determine structural differences in genomes, they have problems understanding the organization of genes and comparing genetic variation within and across species.”

His team, which included UW bioinformatics specialists David Gordon and John Huddleston, as well as postdoctoral fellows, Mark Chaisson, Chris Hill and Zev Kronenberg, analyzed DNA in a blood sample of a female Western lowland gorilla from the Lincoln Park Zoo in Chicago. The researchers used Single Molecule, Real-Time (SMRT) sequencing technology, the assembly tools Falcon and QUIVER, and other techniques to generate long sequence reads more than a hundred times the length of the most popular sequence technologies. The long reads allowed them to traverse most of the repeat regions of the gorilla genome during the assembly.

The result was a new gorilla genome assembly that was larger, with far fewer pieces. Instead of 400,000 fragments, there are now only 1,800 pieces. The average size of the genome fragments was 800 times larger with approximately 90 percent of all gaps in the original assembly closed.

This additional sequencing information, the researchers observed, greatly improved gene annotation for that species of gorilla.  The researchers also discovered housands of protein- and peptide-coding segments and new regulatory elements that had been missed as part of the first genome assembly.

Differences in how genes are controlled, or even the loss or disruption of certain gene regulatory elements, may explain why human ancestors evolved to be so different from their great ape relatives.  The scientists also found tens of thousands of new structural variants, such as deletions or insertions of DNA, that are likely to be more important than the smaller single, base pair differences that were cataloged before.  Base pairs are the chemicals joined two-by-two to form the rungs of the DNA ladder.

“My motivation in studying human and great ape genomes,” Eichler said, “is to try to learn what makes us tick as a species. I’d like to see a re-doing of all the great ape genomes, including chimpanzee and orangutan, to get a comprehensive view of the genetic variants that distinguish humans from the great apes. I believe there is far more genetic variation than we had previously thought. The first step is finding it.”

Among the areas where the researchers have seen intriguing dissimilarities between humans and gorillas are in genes associated with sensory perception, the production of keratin (a skin protein), insulin regulation, immunity, reproduction and cell signaling.

The new genome assembly also provides new clues into the evolutionary history of the lowland gorilla.  Prior studies have demonstrated that the gorilla population underwent a bottleneck in the not so distant past, but analyses with the new genome shows that the bottleneck was more severe than previously thought.  Patterns of genetic variation within the gorilla genome can provide evidence of how disease, climate change and human activity affect lowland gorilla populations.

“I think the take home message,” Eichler said, “is that the new genome technology and assembly bring us back to the place we should have been 10 years ago.”

“Sequencing technology and computational biology,” Eichler and his team wrote in their paper, “have now advanced to the stage where individual laboratories can generate high quality genomes of mammals.  This capability has the promise to revolutionize our understanding of genome evolution and species biology.”

Eichler added that these advances are also likely to contribute greatly to research on the genetic underpinnings of human disease, especially if more human genomes are sequenced in this way.

“As medical researchers, “ he said, “if we depend only on short read sequences, there’s a chink in our armor. The work on gorilla and other human genomes clearly demonstrates that large swathes of genetic variation can’t be understood with the short sequence-read approaches.  Long read sequencing is allowing us to access a new levels of genetic variation that were previously inaccessible."

He added, however, “At  $80,000 a pop, the price is not yet right today for clinical sequencing of human genomes using the long reads.  Given a few years of cost reduction and further advances in technology, I am willing to bet this is the way we will sequence human genomes to discover disease-causing mutations in the future.”

The research reported in the Science paper,  “Long-read sequence assembly of the gorilla genome” was supported by grants from the National Institute of Health HG002385, HG007635, HG003079, HG007990, and HG007234. Eichler is a Howard Hughes Medical Institute investigator.

Researchers from the University of California, Santa Cruz, Washington University in St. Louis, and Pacific Biosciences of California collaborated with the UW on this project.