UW Medicine geneticist is one of nine honorees; King's work has broadened understanding of cancer inheritability
05/19/2016 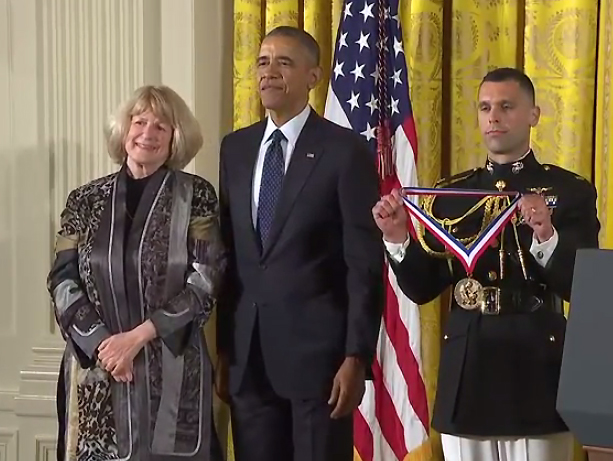 In a White House ceremony today, May 19, President Barack Obama presented the National Medal of Science to UW Medicine researcher Mary-Claire King, a University of Washington professor of genome sciences and medicine. The award honors King's more than 40 years dedicated to research in evolution and the genetics of human disease.

"It's fantastic," King said before the ceremony. "It's a wonderful way to celebrate science and show the next generation that this is a fascinating and worthwhile way to spend one's life."

King was among nine recipients this year of the science medal, which was first awarded by President John Kennedy in 1962.

The ceremony, initially scheduled on Jan. 22, was canceled due to the forecast of an intense winter storm. The Category 5 storm hit mid-Atlantic states Jan. 22-24.

King earned her bachelor's in mathematics from Carleton College in 1967 and enrolled in graduate school at the University of California, Berkeley. She intended to pursue a doctorate in statistics, but a genetics course prompted her to change fields. At the beginning of each lecture, the professor wrote a "genetic puzzle" on the board, a problem that could be solved using principles they were learning. By the end of class, King and her peers knew which experiments would solve the puzzle. She was hooked.

Switching to the genetics program, King and doctoral advisor Allan Wilson tackled a genetic puzzle involving human evolution. Paleontologists and geneticists could not agree on how closely related humans are to our nearest living relatives, chimpanzees. Wilson and King thought that the solution was to quantify the number of mutations that had occurred in human and chimpanzee genes.

King compared the chemical properties of proteins from human and chimpanzee cells. Based on key differences, King predicted that humans and chimpanzees are an astounding 99 percent identical genetically, and last shared a common ancestor 5 million to 7 million years ago.

"That time frame and the 99 percent identity have held up over the years, and were finally confirmed by the human and chimpanzee genome sequences," King said.

As a researcher at the University of California, San Francisco, and later a professor at Berkeley, King began to look at breast cancer.

"The perspective of human genes went against the dominant theory at the time, which was that viruses caused cancer," she said. "Of course, now we know that viruses cause some cancers, like cervical cancer and liver cancer, and that inherited mutations cause other cancers."

Even without the ability to sequence genes, King demonstrated evidence that inherited mutations may play a significant role in cancer susceptibility. She suspected that mutations in still-unknown genes may predispose younger women to breast cancer. She worked with the National Cancer Institute on a study of breast cancer in more than 4,000 women. King showed mathematically that breast and ovarian cancer in some families followed a specific pattern, most likely caused by mutation of a single gene in each family.

"We predicted that inherited mutations explained between 4 and 10 percent of breast cancer," said King, "and that women carrying these mutations had a lifetime risk of 80 percent risk of developing breast cancer."

In 1990, still without modern sequencing technologies, King and her group found the region on human chromosome 17 that harbored the critical gene, which they named BRCA1. The painstaking task to identify the sequence of BRCA1 began, and was completed by another group in 1994.

King moved to the UW in 1995 to better collaborate with colleagues in medicine on translating genetics research into clinical use. Today, with affordable and accurate gene sequencing technologies, testing for BRCA1 and BRCA2 mutations is far cheaper.

King also took on challenges in South America, with global consequences. Beginning in 1984, she developed a new method of genetic testing to reunite grandparents in Argentina with their grandchildren, who had been kidnapped as infants in the 1970s by the military regime. Her efforts there helped launch the United Nations forensic anthropology team, which continues to use these tests to identify victims of human-rights abuses worldwide.

"UW has been an ideal place for me to bring these ideas together," she said.

Past UW faculty to receive the National Medal of Science include E. Donnall Thomas in 1990, Hans Dehmelt in 1995 and Richard Karp in 1996. Leroy Hood was an affiliate faculty member when he received the medal in 2011. UW professor Ernest Davidson received his medal in 2001 while at Indiana University.