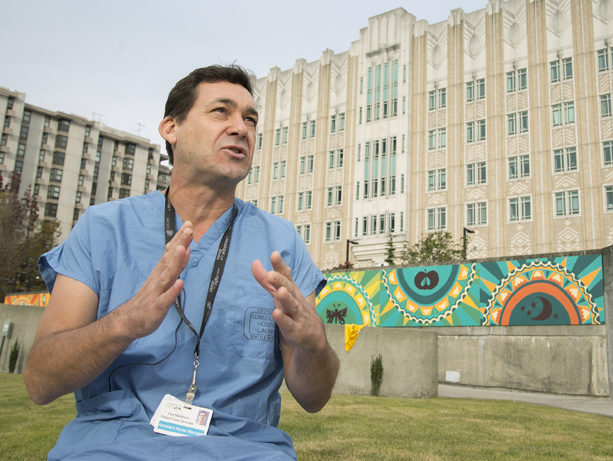 [Editor's note: Guy Maddison and his family have relocated and he no longer works at Harborview Medical Center.]

In blue scrubs, Guy Maddison cradles a cup of cafeteria-grade coffee and offers a warm but weary smile. He’s in the middle of a long week: 40 hours at Harborview Medical Center, then Friday afternoon he and his mates will climb onto a coach and head north (Bellingham, Wash., and Vancouver and Nanaimo, British Columbia) for three nights of roaring as only Mudhoney can.

Maddison’s not complaining, mind you. For the assistant nurse manager, thumping on bass for the pioneers of grunge is the coolest side job imaginable.

And that’s how he stacks the two professions. When asked to identify his occupation, “registered nurse,” is his ready, Aussie-accented reply.

“For me, music is more of (he pauses, searching for words) an area of fun and entertainment. Nursing fills a different space; it is a career,” Maddison says. “My time in Mudhoney is a very extensive and elaborate hobby. I think the other guys would say the same thing.”

That he would need or want a job outside of the band perplexes people, he said. After all, legions of Mudhoney fans around the globe have filled arenas and clubs for 27 years. (Maddison began playing with the band in 2001, coincidentally the same year he became full-time at Harborview.)

“I get that from both sides. People in the greater music community, both who come to concerts and are in the industry, are surprised that I’d have a workaday job. On the nursing side, people think, ‘Why do you bother? Surely you must make a lot of money playing.

“It’s true we go all over the world and play about 50 shows a year, but that doesn’t meet the financial requirements of having a family (a wife and young daughter). There’s no 401(k) or retirement plan.”

In a fourth-floor office beside a busy elevator, Maddison manages schedules of 12 “stat” and 39 critical-care float nurses, people who help maintain Harborview’s stature as one of the best places in the nation to be if your life is on the line.

Photo by Morgen Schuler; courtesy of KEXP
(Click to enlarge.) Maddison, left, and Mudhoney bandmates played atop the Space Needle in July 2013 to mark the 25th anniversary of their label, Sub Pop Records. "It wasn't as frightening as you might think," he said.
picture of Mudhoney playing on top of the Space Needle in Seattle

He's been tucked into this desk job since last year, and acknowledges missing the buzz and variety of delivering critical care to patients, the essence of his role for the previous 13 years. Maddison still carries one stat shift every two weeks – 12 hours he treasures for the patient interaction and the infusion of energy “like the adrenaline rush of a performance.”

“Most of the stat nurse’s job is in the ED [emergency department] or up on the acute-care floors,” he says. “We’re critical-care nurses without patient assignments, so we come to work with a pager and a cell phone and wait to get paged. There are a lot of competing priorities and we’re always triaging.

“The most important thing are the rapid responses: The patients are in an acute-care setting and getting sicker to the point that they require critical care, so we’ll go there and manage them through that or get them transferred to the ICU.”

Nursing was a fluke career path. Maddison wasn’t inspired by his dad (an engineer) or mum (a tennis coach), merely responding to a job ad after having pursued a literature degree. He punched the clock as a medical assistant in Sydney to pay bills while he honed his fret work in the late 1980s for Lubricated Goat, a hard-rock band.

Clare McLean
(Click to enlarge.) Maddison laughed at noticing that his lanyard was not UW Medicine-issue, but from a 2012 French festival that Mudhoney played.
picture of Guy Maddison's employee badge and lanyard

Music brought him to the United States for good in 1993, but hospital work had burrowed into his brain, too. He pursued an associate's degree in nursing from Shoreline Community College, then earned his BSN from the University of Washington – a point of pride, he says.

A training rotation through Harborview’s cardiac ICU compelled Maddison to want to work with critically ill people. His sensibilities also align with the gritty lives of the hospital’s “mission population,” the increasingly marginalized homeless and poor in well-heeled Seattle and surrounding King County.

“Harborview is to me a place where everyone has a common goal of providing the best care for the sickest people with the least amount of resources. Not to dismiss the other areas where people receive care, but to have an opportunity to work where people are most in need, that’s important to me.”

Job and hobby rarely intersect. Only one patient has ever recognized him – a brief, unremarkable encounter in the ER, Maddison says. And once, at a concert in Switzerland, Maddison’s medical skills were called upon.

“We stopped the show because a gentleman got up on the stage and then jumped down into the audience, which kind of parted ways. He fell and hurt his back. I went down and did a quick assessment while somebody called the ambulance.”

The composure that enables Maddison to administer drugs to someone in cardiac arrest also leaves him indifferent to his nugget of celebrity.

Clare McLean
(Click to enlarge.) Mudhoney has a huge following in Seattle, but Maddison expresses pride about his nursing career and Harborview's role in helping people in need.
picture of Guy Maddison overlooking Seattle

“At first I definitely chose not to let anyone know, but my picture’s in the newspaper, occasionally colleagues go to shows. It became known slowly over time. I don’t keep it a secret but I don’t turn up at the rapid response and go, ‘Hey, bass player from Mudhoney’s here,’ ” he says, amused at the thought.

Yes, instead of a swagger, Maddison wears a small touch of swag: His hospital badge is attached to a lanyard from a 2012 festival in France.

“Ah! What’s Right for Music! That’d be from La Rochelle on the southern coast,” he recalls, grinning.

With a toddler at home and a Seattle mortgage, Maddison, 49, chuckles at the prospect of near-term retirement.

“I still have another decade-plus to go,” he says, displaying the 5- and 10-year UW-employee pins on a fleece he keeps at Harborview. But there’s no lament to his voice. Maddison knows he’s one of “The Lucky Ones,” as Mudhoney’s 2008 album acknowledged.

The daily bike ride to work, working in the service of public health, occasional jaunts to fabulous venues and adoring crowds – it’s all as comfortable as a pair of scrubs.