Move it along: Ultrasound to rid kidney stones sans surgery

Move it along: Ultrasound to rid kidney stones sans surgery 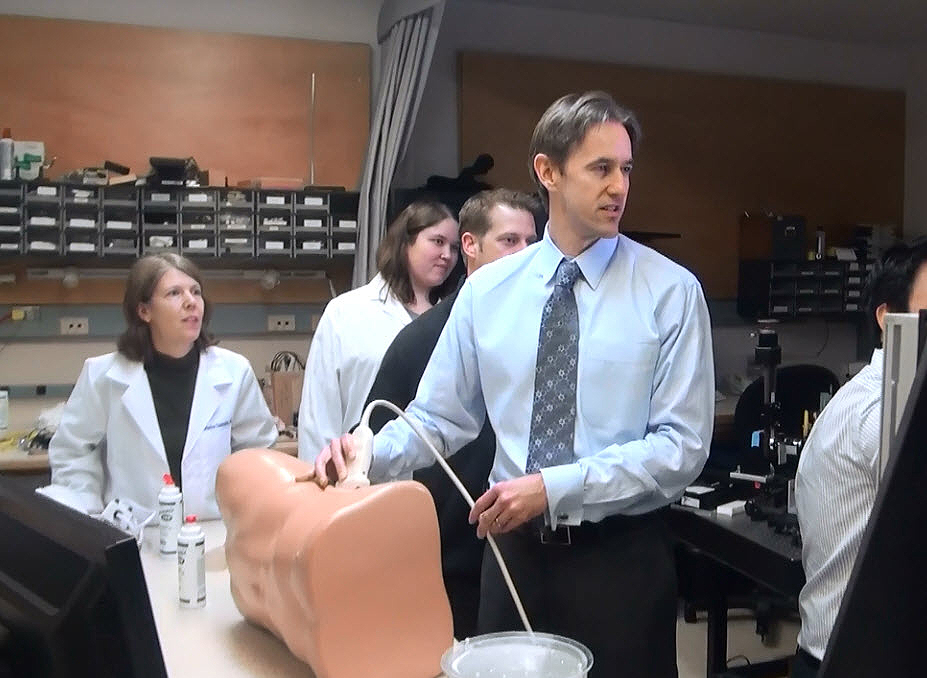 Every year, more than a half-million people in the United States go to the emergency room for kidney stones. The common condition leads to hundreds of thousands of surgeries each year.

Two new technologies developed by University of Washington researchers could bring noninvasive relief to such patients.

Expelling the stones
The first technology uses ultrasound to move kidney stones inside the body and help them pass naturally through the ureter.

“A lot of people have smaller stones that would pass on their own, but sometimes the stones just sit in the kidney. They can eventually regrow into a larger stone or can pass at an inopportune time and cause a lot of pain,” said Adam Maxwell, a UW acting assistant professor of urology. “Ultrasonic propulsion is used to expel these fragments in a controlled manner. Our hope is that this technology will prevent people from getting recurring stones.”

The prototype device is a diagnostic ultrasound imager reconfigured to emit pulses that are longer and slightly stronger than those used for pregnancy imaging. Physicians can view and push the stones simultaneously. They can reposition stones before surgery and dislodge larger stones that obstruct the ureter.

The device is being tested in two clinical trials. The first extends a trial in which no adverse effects were experienced by the initial 15 participants. All were awake during the procedure; two felt some sensation in the kidney but not enough to halt the procedure.  Based on those results, the Food and Drug Administration recently approved adding 15 more participants.

A second trial aims to help patients who come to the hospital with acute kidney stone pain. “The trial will use ultrasonic propulsion in the emergency department to dislodge or slightly move the stones or help patients pass the stone to relieve pain and pressure. Ultimately, we want to try to avoid an emergency surgery or at least take the patient out of discomfort,” said Michael Bailey, principal engineer in UW’s Applied Physics Lab.

The idea originated from 20 years of research of shock wave lithotripsy, in which shock waves are used to break up kidney stones. Maxwell and Bailey found that short ultrasound pulses actually broke stones faster and into smaller pieces than shock waves.

The challenge for researchers is to find the optimal frequency to break the stones into fragments small enough to pass, Maxwell explained. At the lowest frequency they have tested, certain stones can be broken into large fragments in seconds. The highest frequency can break a similar stone into sand-sized particles in 10 to 20 minutes (compared with 30 to 60 minutes for shock wave lithotripsy).

In lab feasibility studies, burst wave lithotripsy has broken “just about every type of natural stone,” Maxwell said. And in animal studies, the team has found a safe range of pressure that breaks stones and does not cause injury.

The system being developed will be smaller and more portable than shock wave lithotripsy machines, potentially making it an office-based procedure, he added. “Rather than needing to go to the operating room, the physician could have the device in the office and try to break a patient’s stones as the first line of therapy.”

Burst wave lithotripsy is still in the preclinical stage. The team hopes that in a couple years they can move into a clinical trial, and, ultimately, give patients and physicians another choice in the treatment of kidney stones.