Most effective birth control methods unused by 95% of teens

Most effective birth control methods unused by 95% of teens 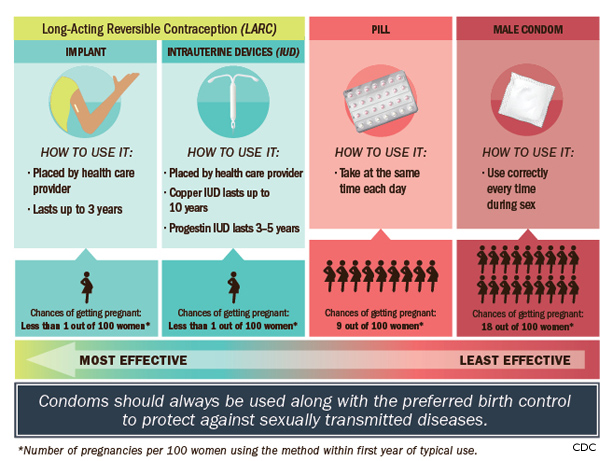 Only 5% of U.S. teens are using the most effective forms of birth control, intrauterine devices (IUD) and hormonal implants, according a recent report by the U.S. Centers for Disease Control and Prevention.

IUDs and implants are “ideal for teens,” said Dr. Lisa Callegari, an assistant professor of obstetrics and gynecology, because they don’t require teens to remember to take a daily pill or to have and use a condom or diaphragm whenever they have sex. Moreover, IUDs and implants can prevent pregnancy for three to 10 years.

Dr. Lisa Callegari's research has focused on family planning, including patient and provider knowledge of, and acceptance of, IUDs and hormonal implants.
picture of Lisa Callegari

“They remove the human error factor and, once they’re in place, they’re highly effective,” said Callegari, whose research has focused on family planning, including patient and provider knowledge of and acceptance of IUDs and implants.

According to government figures, contraceptive use is up among U.S. teens and, as a result, teen pregnancy rates have dropped by more than half over the past two decades, from 61.6 births for every 1,000 adolescent females in 1991 to 26.5 in 2013.

Despite this decline, the U.S. teen birth rate remains higher than that of other developed countries, including Canada where the rate is 14 per 1,000 adolescent females. The upshot: More than 273,000 infants were born to U.S. teens ages 15 to 19 in 2013, with nearly 89% occurring outside of marriage.

Part of the problem is that although 86% of U.S. teens report they used birth control the last time they had sex, most rely on condoms and pills, which often fail if used incorrectly.

“It can be hard for adults to remember to take a pill every day or to use condoms correctly every time, and it’s even harder for most teens,” Callegari said.

Condoms are easily available but do not match the effectiveness of other birth-control methods.
picture of a condom in a pocket

Both forms of are safe and easy to use, Callegari said. IUDs are slipped passed through the cervix into the uterus. “There is a very small risk of infection in the first 20 days after insertion, and after that the risk returns to baseline,” she said. A hormonal implant is small, flexible plastic rod about the size of a matchstick that is slipped placed under the skin where it slowly releases a form of the contraceptive hormone progesterone. Removal requires a small incision. Both procedures can be quickly done in a doctor’s office or clinic.

“First, teens often don’t realize that these methods are available to them and that they’re safe. Second, providers often don’t offer them to teens.”

Many providers worry that these methods are unsafe for young women, despite recent medical evidence to the contrary. Many may still think of IUDs as dangerous due to historical concerns with an early model called the Dalkon Shield, which is no longer on the market. Another major problem is that many providers, especially pediatricians who care for most teens, are not trained in inserting IUD or the implants.

Major medical associations, such as American College of Obstetricians and Gynecologists and American Academy of Pediatrics, have now recommended IUDs and hormonal implants as the first-line choice of birth control for teens, which has helped promote acceptance among providers, Callegari said. “The CDC report is a great call to action. I think the tide has begun to turn.”