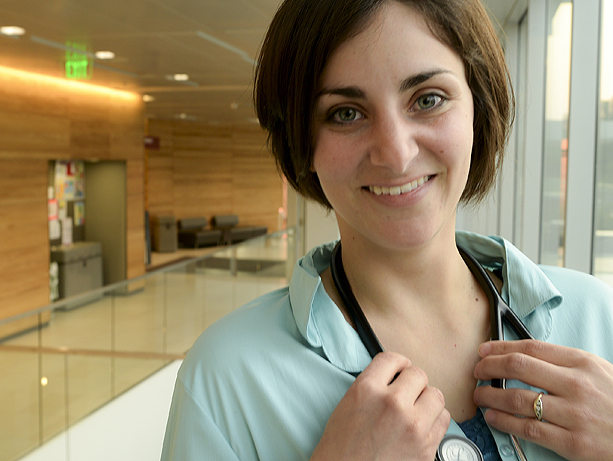 She could do this.

“There was definitely some task- and time-management needed,” Martin said dryly in August, just before launching into Year 1 of medical school at the University of Washington’s site in Spokane.

Martin found several ways to study for her MCAT between commitments. “I remember assistant-directing a play and studying backstage once it went into production,” she said. Martin often woke before dawn to crack textbooks.  “I became very good at multitasking.”

Martin came to medicine from an untraditional path. At 18, she was excited to be the first person in her family to attend college.

“The only people I had known who had college degrees were teachers, so I thought I wanted to be a teacher,” she said. But the career was not a good fit, Martin quickly realized. She dropped out.

“I felt like a failure,” she said. “For a long time, I considered that I wasn’t meant to go to college.”

At 19, she married Calen Martin, a Navy serviceman, and followed him on assignments while she worked odd jobs – insurance, delivering pizzas and bathing dogs. As her husband left for his final deployment, Martin returned to their hometown in Idaho’s Lewiston-Clarkston Valley and re-enrolled in college.

“I loved my first chemistry class so much that I volunteered to grade quizzes the following year. I guess I’m a bit of a nerd in that way,” she laughed.

Two years into her degree, Martin rushed her son Greyson to her family doctor.

“He seemed to read my thoughts. Before leaving, he pulled me aside and told me that I hadn’t waited too long to bring in my son, that I did the right thing. I realized then that family doctors are really an extension of family. That’s when I turned the corner toward pursuing a career in medicine.”

Her husband has been very supportive; he left his upholstery job to care for their children at home.  Two months into the program, Martin knows she has made the right choice. She is the only parent in her class of 40 and, at 27, is older than the majority of her classmates. However, the group is tight and they help each other through the rigor of the new curriculum, she said.

“In medical school, you never really know what you’re getting into until you’re there. I didn’t have lot of expectations coming in, beyond knowing that it was going to be hard. But I’m very grateful to be part of this school.”

When Martin finishes training, she said, she wants to practice medicine in their hometown.