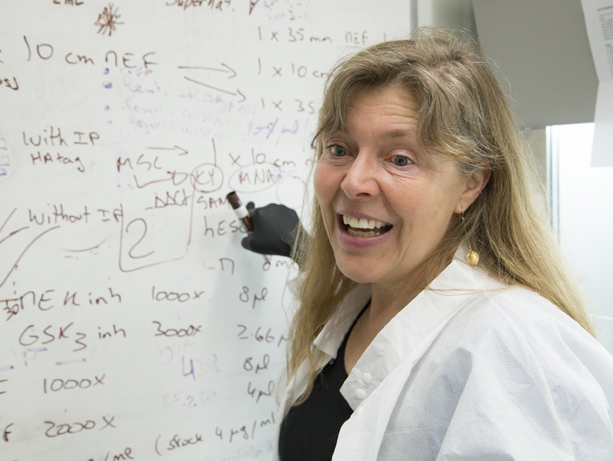 Researchers at the University of Washington’s Institute for Stem Cell and Regenerative Medicine have shown that changes in cellular metabolites, relatively simple compounds, can regulate embryonic stem-cell development at the earliest stages of life.

The findings should improve scientists’ ability to use embryonic stem cells to grow tissues and organs to replace those damage by disease or injury. The researchers report their findings in today's issue of Nature Cell Biology.

After fertilization, the fertilized egg begins to travel down the fallopian tube. As it does, it begins to divide, forming a ball of embryonic cells. Each of these cells, called “naïve,” has the capacity to develop into any cell type in the human body, an ability called pluripotency.

When the developing embryo enters the uterus, it must implant into the lining for the pregnancy to proceed. When implantation, the naïve cells take the first step to differentiating into specific cell types such as gut, muscle or nerve cells. Such embryonic stem cells are called “primed."

“Implantation to mother’s uterus is arguably one of the hardest things we ever have to do in life,” said Ruohola-Baker, UW professor of biochemistry and co-lead of the research team. “In fact, most embryos fail to successfully implant, ending the pregnancy.”

Scientists working in the area of tissue regeneration are particularly interested this shift, because although primed cells are pluripotent, they are more difficult to work with than the naïve cells.

In comparing gene expression of the two cell types, the researchers found intriguing differences involving the cells’ metabolism. “The expression of the metabolic genes, particularly those related to the function of mitochondria, was much higher in naïve cells,” said Yuliang Wang, now a senior research associate at Oregon Health & Science University and one of the lead authors of the study. “There was also a big difference in gene expression of a specific enzyme called Nicotinamide N-methyltransferase” (NNMT).

The activity of NNMT alone determined whether a cell stayed in the naive state or proceeded to the primed state, the researchers learned. They also showed it was possible to manipulate the cells to keep them in either state, which could be very helpful to the study of embryonic cells’ biology and development, and perhaps for developing new therapies.

“The findings suggest we may be able to use metabolites to alter cell fate in the treatment of common disorders," Ruohola-Baker said. "For example, such an approach might be able to treat the most common cause of infertility and even to affect the cellular changes that lead to the development of cancer.”