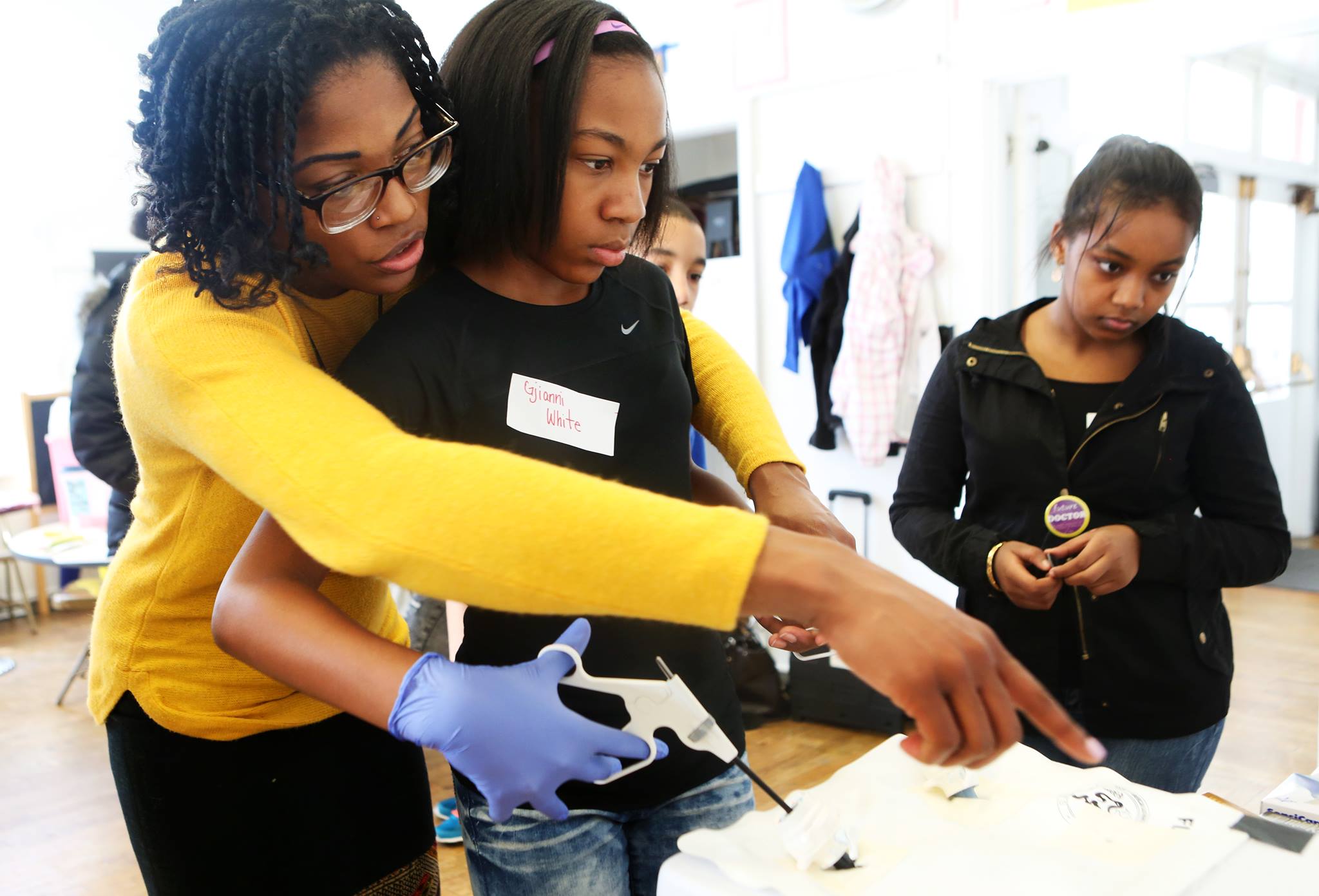 Dr. Estell Williams walked around the tables and watched as each “student doctor” took their first attempt at applying a row of stitches to their “patient.” She stopped in front of Marlisa Hall, 15.

“How are you doing?” she asked “Need some help?"

Williams, a UW second-year general surgery resident, was volunteering at a “Doctor for a Day” workshop hosted by the Africatown Center for Education & Innovation in south Seattle. The program is aimed at introducing minority middle and high school students to careers in medicine.

She knelt down and put her arm around Hall and helped guide her hand as she put a suture in the skin of the banana in front of her.

“I know this feels strange, but that was it!” Williams told Hall. “You’ll get stronger and better at it every time you do it.”

Hall looked up at Williams and smiled.

Williams always knew she wanted to be a doctor, but she never had a role model and didn’t know what that path looked like. The youngest of seven kids raised by a single father in East Oakland, she excelled in school, but those circumstances earned her the tags “at risk” and “disadvantaged.”

Even with help, the path to a medical degree was not easy. Hurricane Katrina interrupted her studies at Xavier University in New Orleans. She finished her undergraduate degree at San Francisco University while working full time to pay for tuition that was more than twice the cost of Xavier.

UW was one of the last schools she interviewed at for medical school. Though the interview was successful, Williams worried about the lack of diversity on campus.

“I left the interview thinking, ‘It’s a great school, but I don’t know if I fit in here.’ Then I received an invitation from the Office of Multicultural Affairs for a second look. That was a game-changer,” she said.

That day she met some future classmates.  “It felt like home. There were black, white, Filipino students, all like-minded individuals. They were and they still are the most amazing people,” she said.

William committed to the University of Washington and immediately started paying it forward. She volunteered with the Student National Medical Association, Alliance for Equal Representation in Medicine, and the Summer Medical and Dental Education program -- all groups aiming to help provide opportunities and exposure to medical careers to underrepresented students.

“When I think of diversity, I think in broad terms. However, I do think it’s important for kids to see someone who looks like them,” Williams said. “Things have to be more tangible for them. As you get older, you realize it’s a lot more complex than that. I still remember being star-struck when I first saw those individuals and thinking ‘That can be me.’ ”

Anita Koyier-Mwamba agreed. She is the mother of 12-year-old Ndalo Mwamba who attended the “Doctor for a Day” event and who dreams of being an obstetrician.

“This is a huge thing,” Koyier-Mwamba said. “My child gets to experience what it feels like to be a doctor and she is being taught by people who look like her. This is a very powerful narrative.”

This is why Williams keeps volunteering, even with her busy, frequently changing rotation schedule.

“It gives me a recharge, gives me purpose,” she said. “It’s probably just because I remember that feeling of having people invest time in me and how great that felt.”

As students waited their turn to try the laparoscopic trainer, Williams engaged them in conversation. Shailah Fakhri, 15, said she wants to be a neurosurgeon; another expressed interest in general surgery. Each received encouraging words and a high five from Williams.

At the end of the day, as the students gathered to review what they had learned and hear about different medical career options, Williams spoke about what steps they should take now to achieve those goals.

“Never be afraid to ask,” she said. “You are never a bother. You have to ask if you want the opportunity. Even if someone tells you no, keep asking. Just keep asking.”